The Key to Surviving the Great American Streetcar Closures? Dedicated Space – Next City 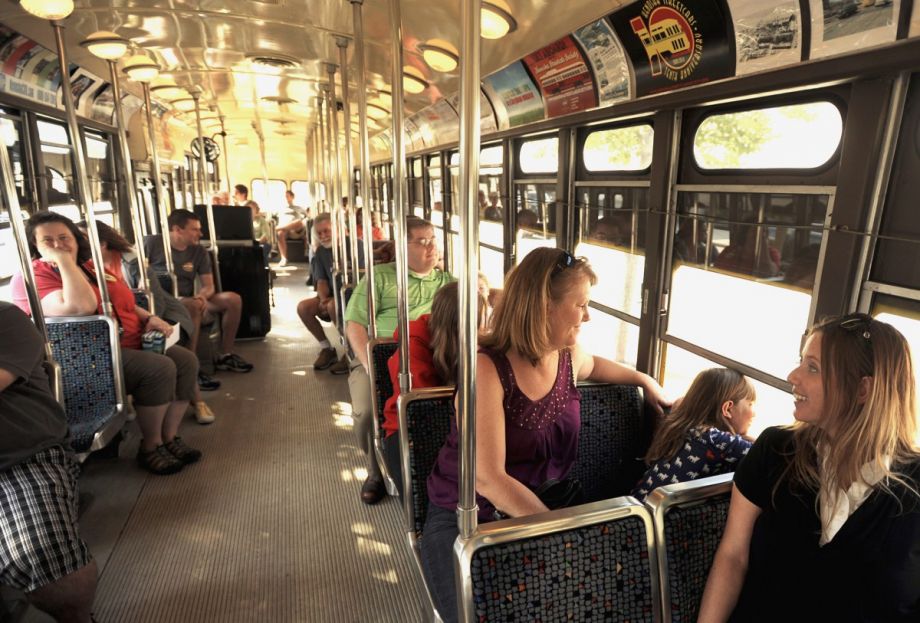 Modern mixed-traffic streetcars might not be any faster than a bus, but, their boosters say, rails are more permanent than buses. Bus lines can be easily rerouted or cut altogether, possibly leaving developers unsure of their would-be transit lifeline’s future. Abandoning tracks, catenary and trains, on the other hand, is a much more significant step, and perhaps one that cities wouldn’t take as lightly as cutting bus routes.

The flippant response to this would be to point to the thousands of streetcar lines across America that were ripped out or paved over in the first decade of the 20th century. But if you take a more careful look at which lines survived and which did not, you notice a trend: Surface rail lines that had some segments that were separated from general car and truck traffic had a much higher likelihood of survival into the 21st century.

Despite the popular legend that streetcars were bought up and maliciously abandoned in conspiracy by car, truck and oil companies, the decline of the streetcar in America was due rather to a complex combination of economics, politics and zeitgiest, much of which revolved around the perennial tensions between the “traction magnates” who owned America’s streetcar networks and the politicians who licensed their routes and regulated their fares.

Streetcar tracks were in some cases ripped out under private ownership, and in others after the city had already taken over bankrupt lines (bankrupted by, among other things, fare caps, street paving requirements – nevermind that cars were also using the streets – and heavy taxation). But no matter who was doing the removal, across the United States, a line was more likely to survive if it ran faster than a bus could.

All major pre-war streetcar systems still standing in the United States – in San Francisco, Philadelphia, New Orleans, Boston, Newark and Cleveland – have portions of track that do not compete with general auto and truck traffic for space, and therefore can beat buses on travel times.

In Philadelphia, Boston and Newark, New Jersey, it was tunneled segments beneath congested downtown streets that saved their streetcars.

Buses could do just as well as the streetcar as they snaked through West Philadelphia, for example, but buses couldn’t go underground into the Center City tunnel that the Philadelphia Transportation Company (and its earlier corporate identities) dug in phases from City Hall, and would instead have had to duke it out with traffic on Market Street. Even when Philadelphia’s system was bought by National City Lines – the company owned by General Motors and Standard Oil that bought up some struggling private streetcar companies and replaced their streetcars with buses – they tore out all of the lines except those that fed into the Market Street tunnel.

Some of San Francisco and Pittsburgh’s lines were also saved thanks to their dedicated rights-of-way, though these rights-of-way were not in congested downtowns, but rather through steep hills. In San Francisco, all of the lines that survived traveled through either the Sunset Tunnel or the Twin Peaks Tunnel (or, in the case of the J Church, along a short, private right-of-way down a very steep hill). Even though they are short and not beneath downtown arteries, the two tunnels gave the streetcars enough of an edge over buses that they were not ripped out. The tunnels were defining features of the city, and the Twin Peaks Tunnel especially (they named a neighborhood” after one of the portals) allowed widespread development throughout neighborhoods like the Sunset District in the southwestern part of the city. These lines were the only ones that survived – even high traffic volume couldn’t save the streetcars on Geary Boulevard, which at no point traveled anywhere other than with traffic.

In Pittsburgh, it’s the Mt. Washington Transit Tunnel that saved the streetcars. As in San Francisco, the tunnel is not very long – shorter than a mile – but the terrain it passes through is forbidding enough to make the tunnel much quicker than surface streets. After Pittsburgh’s surprisingly long-lasting private system was taken over by the Port Authority of Allegheny County, they considered turning the tunnel into a busway, but ultimately decided against it.

Both San Francisco and Pittsburgh have, along with other cities with legacy streetcar networks, since given over even more dedicated right-of-way to their streetcars – the Muni Metro tunnel beneath Market Street and some paint for the J Church in San Francisco, and Pittsburgh Light Rail’s shorter downtown tunnel and longer new at-grade dedicated segments.

In New Orleans, the streetcar on St. Charles Avenue was saved by virtue of the fact that it ran in a grassy median all of its own – called neutral ground in New Orleans parlance, and quite popular now for new tram lines in Europe. Perhaps appreciating the utility of this legacy line, all of New Orleans’s modern streetcar lines run in dedicated lanes in the middle of the street (or, in the case of the Riverfront Line, in its own separate right-of-way).

The survival of Cleveland’s Blue and Green Lines as rail is due to the fact that the Van Sweringen brothers, who built the Cleveland Interborough Railroad through Cleveland’s east side to Shaker Heights, insisted on a clear right-of-way to boost the value of their suburban land. They even went so far as to buy the Nickel Plate Railroad to do it.

While I’m sure there are many streetcar lines that had dedicated rights-of-way and did not survive, it doesn’t appear that any lines without space and speed advantages over buses were left standing much longer after World War II. If the past is any indicator of the future, this does not bode well for the long-term health of the mixed-traffic streetcars that are proliferating across the United States, either already built, as in Portland, or under construction, as in Cincinnati and a dozen or so other cities. Streetcars went out of style and might once again, but speed never does.