The Slum That Became Manila’s Recycling Champ – Next City 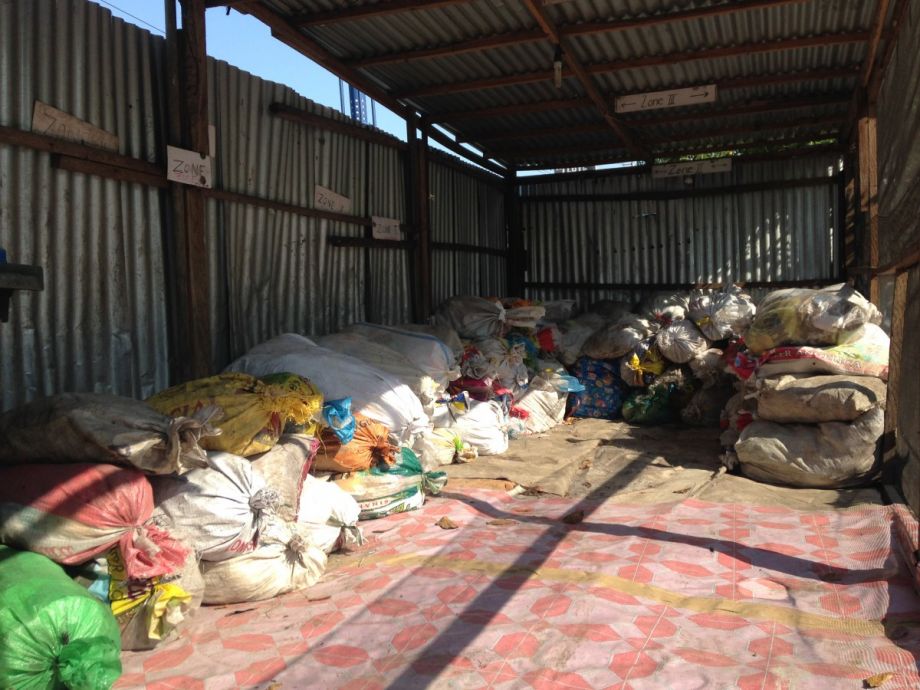 In Bararangay Fort Bonifacio, an area of about 12,000 people, most of the garbage is either recycled or composted. These plastic sacks are a days worth of trash for the entire neighborhood.

After two consecutive typhoons and the constant deluge of the seasonal monsoon, on July 10, 2000, Payatas, the massive mountain of garbage in northern Metro Manila, collapsed. At least 300 people — men, women and children who lived and worked on the mountain — were buried alive in the avalanche of garbage.

It’s the sort of horrifying tragedy that inspires quick legislative action. Later that same year, the Philippine government swiftly shut the Payatas open dump and passed the Ecological Solid Waste Management Act, a law that seeks to manage Manila’s trash problem by mandating things like sanitary landfills rather than festering open dumps. But the legislation’s biggest goal is to reduce the amount of garbage that needs to be dumped through recycling and composting programs.

Right now, the law stipulates that half of all waste be diverted into compost or recycling. That mandate will rise slightly every few years until it reaches 93 percent, which is the portion of an average Filipino’s garbage that can be composted or recycled, according to an analysis by the Asian Development Bank.

Froilan Grate, president of the Mother Earth Foundation, an organization that advocates for zero waste in the Philippines, calls it “a very good law.” It’s just not being implemented.

A few months after the disaster, the Payatas dump was reopened, at the request of the waste-pickers who depended on it for income, and because trash was piling up in the streets of Manila with nowhere else to go. The open dump, which was technically illegal, was renamed a landfill to comply with the law. But, Grate says, “It’s a landfill on paper only. It doesn’t mean it’s operated as a sanitary landfill. It’s still a dump.”

Grate concedes that the slopes are less steep than they used to be, reducing the possibility of another fatal garbage avalanche, and that the methane gas emitted by the rotting garbage is now better managed to prevent spontaneous flare-ups. But simply renaming the heap undermines the legislation’s primary goals, and sets a risky precedent for the city’s future waste management strategies.

Thirteen years after the act was passed, less than a quarter of Metro Manila’s barangays, or urban villages, have a working materials recovery facility. These recovery facilities are the lynchpin of the waste management plan. They’re where, ideally, food scraps get turned into compost, glass bottles and plastics are routed to the right facilities and residual trash (the small portion of actual garbage that can’t be recycled) is picked up and trucked to a landfill.

San Fernando City, about an hour north of Manila, is an example of what a properly implemented waste-management system looks like. Every one of San Fernando’s barangays has a materials recovery facility. Grate says that about half of their garbage is either recycled or composted, and as a result their dumps are much smaller and it only costs the city 13 pesos (28 cents) per person per week to collect garbage. By contrast, Quezon City, Manila’s largest municipality, spends 333 pesos ($7.32) per person per week and Pasay, another Manila municipality, spends 900 pesos ($19.95).

The savings are significant, but corruption and vested interests mean there are also big incentives in some municipalities not to save money. Grate also attributes some of the resistance to something more mundane: “Leaders are just lazy to try it,” he says.

The law is mandatory nationwide, but like most laws in the Philippines, the primary prerequisite for its implementation is a good leader and political will. Grate fights corruption through lawsuits and splashy media offensives (like a recent report on one of the Philippines’ major news sites), but mostly he works with leaders who are already willing to improve their barangays.

According to a Mother Earth Foundation assessment, only one of Metro Manila’s 1,704 barangays is fully compliant with the garbage law. Barangay Fort Bonifacio is mostly a slum community (it also includes one of the most upmarket areas of Manila, but that’s on private land, with private garbage collection), where about 80 percent of household trash is either recycled or composted.

Just two years ago, trash was spread out on the road, “like grains of rice drying in the sun,” says neighborhood councilwoman Vilma Padro. Of the four lanes, only one was passable. It smelled terrible, motorists would toss garbage out their windows and resident waste-pickers roved around in gum boots or flip flops, picking through the trash looking for anything they could resell. It was a mess.

Today, however, the street and the sidewalks are clear.

Rufino Dayang, 37, lives in Barangay Fort Bonifacio and works at the materials recovery facility as an “eco-aide.” He’s a formalized waste-picker — instead of doing it on his own, he’s now paid a monthly salary by the local government to go house to house, picking up sorted trash, recyclables and compost every day. The eco-aides also teach — and enforce — garbage sorting. While Dayang says there’s no such thing as perfect, “We love our job, and if you love your job they start to respect you and they’ll start to sort their garbage.” Dayang says that the majority of households he goes to now sort their garbage properly. “Just because we’re squatters,” he says, “it doesn’t mean we can’t be disciplined.”

After collection, Dayang and the other eco-aides take their haul to the barangay materials recovery facility. There are beds of warm compost, a few plastic burlap sacks of residual garbage and barrels of kitchen scraps a nearby piggery will pick up for feed. Flies buzz through the air, but the smell of trash is faint. Anything that can be recycled or reused is wheeled over to the privately-run junk shops down the road, and Dayang and the other eco-aides pocket whatever they pay to supplement their incomes.

It’s a small and late start, but for Froilan Grate, it’s the start he’s been looking for. He can now hold up Barangay Fort Bonifacio as an example that the 13-year old Ecological Solid Waste Management Act can work. And the more examples he has, the more municipalities are willing to try it.

There have been some improvements since the year that Payatas collapsed. About 20 percent of the barangays have opened a materials recovery facility, even if implementation is still imperfect. Awareness across the board is higher, there’s less indiscriminate dumping into rivers and onto mountains of garbage. “It’s a lot better than 14 years ago,” he says. “In terms of the ideal, we’re not even halfway there.”

He says the goal is for a zero-garbage Manila, and it won’t get there “until all garbage has value.” When everything that can be thrown away has a second or third life as compost, pig feed, cement-block filler, or is recycled into another incarnation of itself, it will change the landscape of the city.

To imagine the garbage law fully implemented is to imagine a better city. Grate says that if every barangay carried out the Ecological Solid Waste Act, “we would have a thousand materials recovery facilities, with gardens and composting areas.” There would be 10,000 eco-aides — former waste-pickers who would have stable salaries and better working conditions. There would be no more waste in the waters and canals, and no more garbage trucks driving around leaking black leachate. There would be more money in the community for roads and schools, less flooding due to clogged canals and fewer diseases like dengue fever, as well as fewer rats and stray cats.

And Payatas? “In an ideal world,” Grate says, “Payatas wouldn’t even exist.”