The History Behind Berlin’s Cheap Rents – Next City

The History Behind Berlin’s Cheap Rents 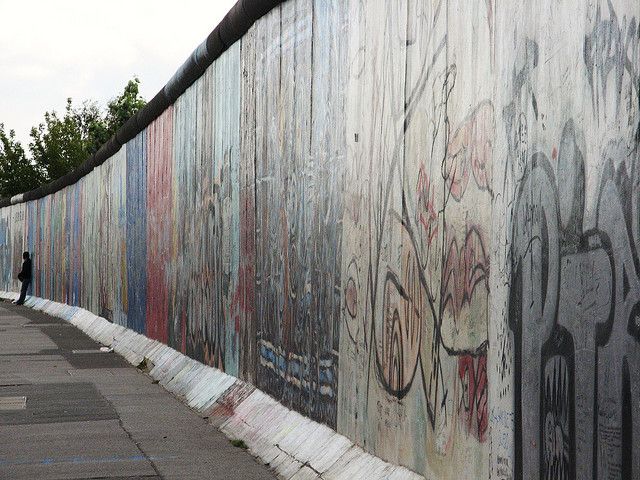 The fall of the Berlin Wall was not enough to offset the negative shock of the Iron Curtain. Credit: Jo McCunn on Flickr

As soon as one begins trying to understand why rents are currently rising so sharply in Berlin, there’s one question that immediately and unavoidably comes to mind: Why have the rents historically been so low in the first place?

And it’s a touchy topic here. Bring up the fact that Berlin’s rent prices have, until now, been scores cheaper than in almost any major comparable Western/European city on average, and Berliners will batter you with a slew of reasons why it’s an unfair card to pull out.

And actually, they’re kind of right to do so. It’s an easy card to use when dismissing their complaints around the issue of rising rents, and a frequently used one at that — but it’s also a slightly problematic one.

To understand why, though, involves first understanding a bit about how Berlin’s complex and unique post–World War II history helped, in part, to lead to Berlin’s mass deindustrialization, and how that is influencing the current climate today.

This may be common knowledge for some Berliners and history buffs, but for those of us who don’t know the story in detail, it’s too important to skip over.

A few days ago Dr. Nikolaus Wolf, professor and director of the Department of Economic History at Humboldt-Universität zu Berlin, took the time to sit down and give me an abridged summary of the economic historian’s perspective.

Here’s what I learned:

In the late 19th century and through the 1930s, Berlin’s economy looked nearly like an empirical diagram of a theoretical city structure, with a clear center of banking and finance peaking up in the center and rings of industry spreading outward.

Come the 1940s, of course, this diagram changed dramatically due to a number of blows.

First there was the war, which destroyed a lot of infrastructure right off the bat. But more importantly, the city was then chopped in half by the Iron Curtain — the line dividing the Soviet-occupied East from the West (replaced in 1961 with the blatant physical division of the Berlin Wall). Then there was currency reform in western Germany. The Deutsche Mark was introduced, and the Western Allies decided also to introduce it in West Berlin, which divided Berlin even further economically and provided a massive incentive for businesses to migrate to the western part of the city.

In an effort to stop this, the Soviets blocked the entry and exit points to West Berlin — railways, roads, canals and so on, all but three air channels agreed upon in the Potsdamer Protocol (this is known today as the Berlin Blockade, the phenomenon that led to the Airlift). This essentially cut the western part of the city off from its hinterlands and turned it into an isolated economic island.

Now, all this time there was a looming risk that the Soviets would take over control of the entire city, which, for business owners, meant a looming risk of expropriation, which is “kind of the worst thing that can happen to an entrepreneur,” as Wolf put it.

So what did they do? They got the hell out of Dodge. And by “they,” I mean basically, well, everyone. Deutsche Bank, Commerz Bank and Dresdner Bank all packed up and moved their headquarters out of the city to western Germany. So did insurance giants like Allianz, printing companies like Scherl and the huge industrial employers like AEG and its competitor Siemens, which alone employed upwards of 50,000 in Berlin at the time. The biggest airport in Germany moved to Frankfurt and took Lufthansa with it as well. And those are just the big guys; the smaller guys moved out, too.

“So you can say this is kind of a series of negative shocks and this, in the early 1950s, creates a problem of mass unemployment even when in West Germany you already have the economic miracle underway. The West German economy is already starting to take off and West Berlin is stuck with this problem,” Wolf said.

This was the situation all through the time of the Berlin Wall, until 1989.

Then the wall fell. Berlin became the capital of Germany again. Everyone expected a massive economic boom.

But the boom didn’t come.

“What everyone expected to find is that this city would really now be taking off and booming after unification because you remove all these obstacles for economic development. But this doesn’t materialize,” Wolf said.

Some claim this was because the government cut down on the subsidies that propped up the West Berlin economy throughout the Cold War. But in reality the subsidies dwindled very slowly and reluctantly. In fact, even today Berlin is an absolute anomaly as a capital city in the Western world in that the city budget still remains so dependent on federal transfers that it actually receives more from the system than it pays into it.

A more reasonable explanation, however, is the fact that every one of the companies that left the city spent decades sinking money into new infrastructure elsewhere. At the same time, in the 1980s and 1990s the technological revolution was taking place and in the computer age it was becoming less and less necessary to be headquartered in a certain location in order to deliver the goods to the people there.

“When the wall came down they just had very little incentive to move back. For Siemens and AEG, for example, there was absolutely no incentive to come back, and not one of the big banks or the insurance companies actually moved back. Nearly no one did,” said Wolf.

It goes more or less without saying, then, that with an economy stuck in such a unique rut for so long, the housing prices remained similarly uniquely low as well. There was little incentive to build and invest in a city that wasn’t growing economically. Which is precisely what has helped make it so attractive to many, and such fertile ground for investors now that the economy is finally beginning to recover.

This story was originally published on Lab|log at bmwguggenheimlab.org © 2012 The Solomon R. Guggenheim Museum, New York. Used by permission.