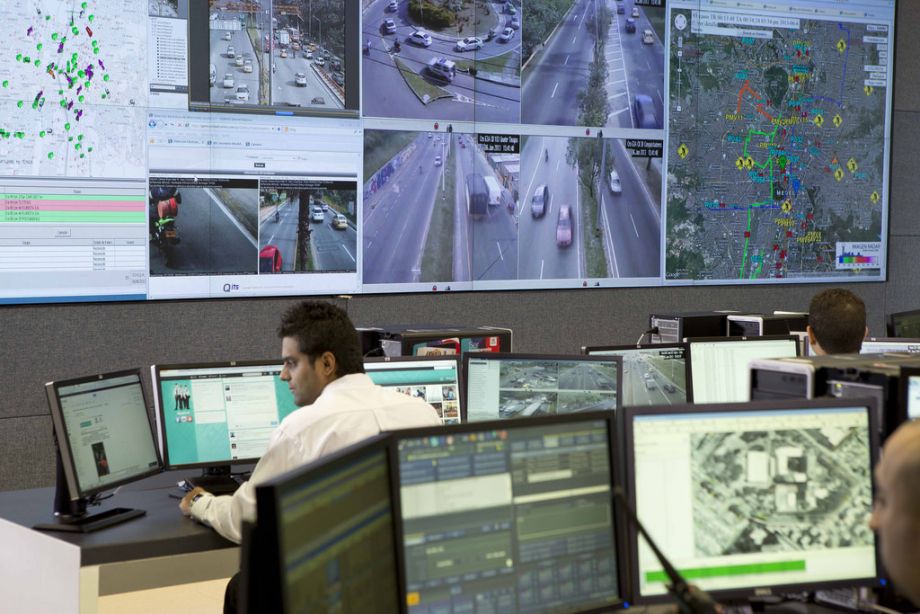 Medellin’s traffic Control Center allows agents to monitor cars throughout the city from a single room.

A drive around Medellin can feel like being in The French Connection. With scores of motorbikes weaving through fast-moving cars, pedestrians crossing in the midst of traffic and drivers who think nothing of putting two wheels up on the pavement, the quest for safer and more efficient roads appears on the surface to be a pipe dream.

But recently the city has turned a corner. Five years ago, Medellin invested millions of dollars in a high-tech road monitoring system that appears to have drastically and single-handedly changed the city’s traffic dynamic.

To be sure, the city still has major traffic problems. Last year, Medellin saw an average of 232 collisions per day (not including Sundays) and 303 drivers killed on its roads, according to statistics provided to Next City by the office of the Secretary of Mobility. While that gives the city a slightly lower per capita death rate than the countrywide average, it is more than double the number of traffic deaths seen in comparatively sized Chicago.

It’s not just the thousands of collisions and hundreds of deaths each year that present a problem. The city is so congested that it has introduced rush-hour road-space rationing. Aggressive driving only makes this congestion worse. That’s why the city developed the centralized “Medellin Intelligent Mobility System.” Initiated in 2009 and under continuous development, since the system came online the city has seen a significant reduction in road deaths, accident-response times and congestion.

“This is a supremely important system to insure the people of Medellin are mobile in a secure, safe and modern manner,” says Medellin’s Secretary for Mobility Dr. Omar Hoyos. “It means more citizens educated, more citizens safe and a culture of looking after the city.”

The system, which has so far cost $17 million and is projected to require a total investment of $34 million by 2025, is comprised of two nerve centers from which traffic is monitored by a network of cameras and closed-circuit video feeds. Drivers’ information panels, engagement with residents through social networks and a planned bus-monitoring system round out the multi-pronged network.

The first of these two nerve centers is the Control Center, where a team of 40 people collect and analyze a continuous stream of real-time data from the city’s roadways. Within the Control Center is the Operation Room. Here, shifts of six to eight agents, each with three or four monitors clustered around them, track the city’s traffic on a bank of screens that takes up an entire wall. To identify problems, the Control Center uses a range of sensors that alert to any traffic abnormalities or pattern shifts; agents then evaluate the situation and decide whether they need to take action.

The Operation Room is a hive of activity, as agents collate information and implement responses to traffic flow problems. Such problems are disseminated to the city’s drivers via Facebook and Twitter. The agency’s Twitter account has more than 70,000 followers.

“Before the Control Center we had a very basic monitoring system based on security cameras, but none of this software,” says the Control Center’s director Roberto Urrea. “It allows us to have fewer people observing many more incidents and responding more rapidly.”

The system has shown signs of success, with response times to incidents dropping 12 percent between 2010 and 2013, from an average of 20 minutes and 39 seconds to 18 minutes and 10 seconds. According to Urrea, this has reduced the danger of secondary collisions and reduced congestion caused by incidents.

Police officers work out of a room next door to the Photo-Detection Center.

The second nerve center is the Photo-Detection Center, which compliments the work of on-the-ground traffic police, acting as a first set of eyes to identify traffic infractions, with agents using sensors and 40 cameras to monitor 70 traffic hotspots. According to Natalia Londoño Guerra, the operations manager of the Photo-Detection Center, the equipment helps to identify 5,000 to 6,000 potential offenses each day, of which around 1,200 are corroborated as infractions by a team of police officers who work out of an office next door.

Centralized traffic control systems like this one are popping up in cities around the world, most notably in Rio de Janeiro, where an I.B.M.-built command center monitors traffic (as well as crime, weather, and dozens of other urban concerns) 24 hours a day. That project has drawn a mix of praise and criticism, with naysayers arguing that Rio’s underlying infrastructural problems won’t simply be solved with dazzling arrays of flat-screen TVs.

But officials in Medellin say that the effectiveness of their center is measurable, with 40,000 incidents detected each month in addition to the 15,000 detected by traffic police both before and since the center was launched. According to Londoño, the center has led to a marked improvement in the driving culture of the city, with only three of every 1,000 vehicles committing an infraction, compared to two of every 100 when the center first began operations.

“This has contributed a lot to the city because now the people understand, through the use of this technology, they must respect the rules of the roads,” says Londoño. “It is in part so effective because it has hit drivers in their pockets.”

But according to Londoño, the effect has not just been felt around the hotspots being monitored, but throughout the city, with a significant drop in accidents resulting from drivers exceeding speed limits. The system has also spurred a decline in the culture of invading pedestrian space, such as idling in crosswalks at red lights. And the entire system is set to expand. Thirty-two more cameras will soon be installed, bringing the Control Center’s total to 80. The Photo-Detection Center, meanwhile, is equipped to handle up to 200 cameras; that number is also projected to grow this year.

What’s more, the whole system is integrated into the city’s other traffic programs, such as the expansion of the metro line and implementation of bus systems linking areas of the city not currently served by the metro, which Secretary for Mobility Hoyos says is key to effecting change in the driving culture, not just from a safety perspective, but also an environmental one.