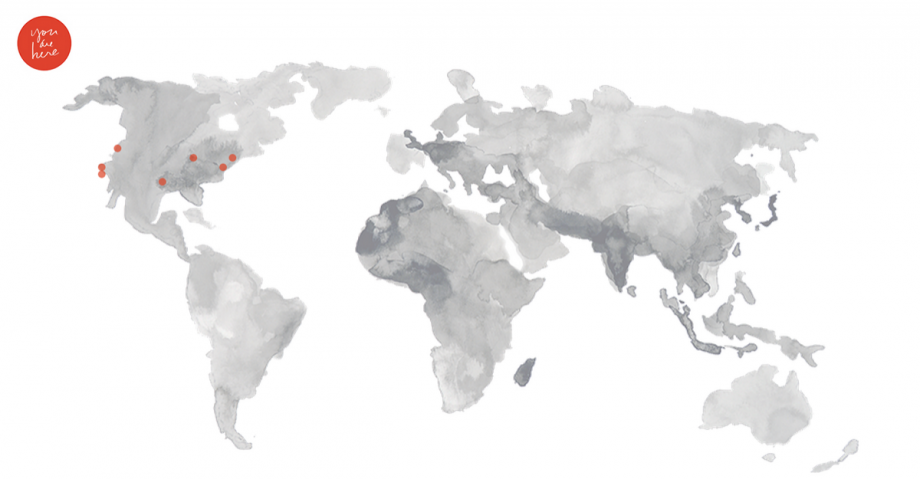 “You Are Here” is a new project from MIT Media Lab’s Social Computing Group that sets itself apart from today’s bevy of online mapping projects by sheer scale. The project’s ambition is massive: 100 maps revealing details of 100 different cities. In case you, like me, didn’t go to MIT — yes, that’s 10,000 maps. So far the group has produced nine: Maps of bike accidents in its home turf of Cambridge as well as in Austin, Portland, Chicago, Los Angeles and San Francisco, as well as maps of the “walkingsheds” of local coffee shops in Cambridge and, as of this morning, San Francisco and Brooklyn. That leaves just 9,991 to go.

At the current pace of one or two new maps a day, it will be about 2030 before the project wraps. Sepandar “Sep” Kamvar, the computer scientist and artist who leads the social computing team, admits they will probably need to pick up the pace. 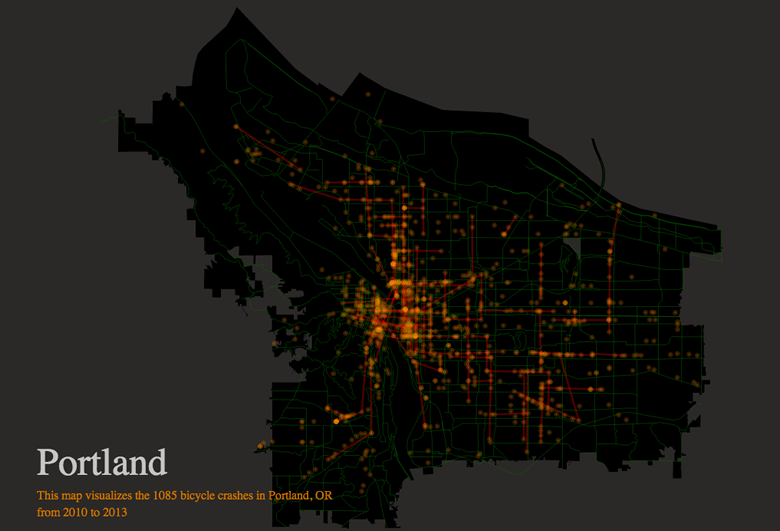 So why, I gently ask the professor, bother? The question doesn’t come at a surprise, but Kamvar says a complete answer spans multiple levels. For one thing, Kamvar says, “just a map alone does do something.” It can “make the invisible visible” — that is, nudging residents toward an awareness of something about their city they didn’t know before. Bike accident maps prompt conversations about separated bike lanes. Maps of trees highlight parts of some cities that are indisputably but redeemably barren.

But “You Are Here” is about more than just awareness of on-the-ground facts of urban life. It is also, Kamvar says, about an awareness that “software can shape cities” and, in fact, is doing so while we watch.

Take the food truck renaissance that has taken hold in San Francisco. For some time, getting a license to operate a mobile food purveyor was a difficult and expensive process, with fees in the neighborhood of $10,000 per truck. One way to understand the rise of non-stationary restaurants is to look at it through the lens of technology, social tools in particular. (Kamvar, it’s worth nothing, co-authored a 2003 paper on peer-to-peer networking that is considered one of the most influential in the field.) “It turns out it was because of Twitter,” he says. With Twitter, launched in 2006, unlicensed food trucks didn’t need a city-ordained spot from which to operate. They could move around the city, evading enforcement but still letting customers know where they’ll be.

It didn’t stop there, though. Licensed food truck operators, Kamvar says, took a look at the cache of engaged Twitter followers their illegal counterparts were building and said, “You know what? This is a food truck customer database, basically.” The licensed food trucks then “followed” the unlicensed trucks’ followers and “a thriving community around food trucks was formed.” That community made it more desirable to run a truck. Even if that dynamic acted itself out mostly over the Internet, it still put actual Indian burrito and waffle and fancy grilled cheese trucks on the city’s roads and in its alleyways, remaking San Francisco’s street life in the process. “Quantitative changes,” Kamvar says, “tend to lead to qualitative change.”

That’s social computing, Kamvar says, and the moment for it is particularly ripe. Frank Lloyd Wright may have argued in the 1920s that, in large part because of increased connectivity provided by the telephone, “the big city is no longer modern.” But the Internet, Kamvar argues, has seemed to cause almost the opposite to happen. The Internet makes it easier to make and spread things, which allows companies to stay small and independent. At the same time, small companies have a pressing need to be in close contact with others like them, better for the sharing of ideas and employees. Partly as a result, “we’re seeing the return of the city in a very strong way.”

If you accept the premise that software is shaping cities as we watch, the question for many becomes how you thoughtfully engineer the technology to guide that path in the direction you want it to go. (As for the particular policy goals aimed for, Kamvar describes them as commonly held wants: Things like more trees, longer lives, more economic activity.) Kamvar’s Social Computing Group is made up of grad students and research scientists with expertise in computer science, art, architecture and education. They’re guided by a three-part framework that Kamvar distills as “pictures, patterns and processes.”

Pictures are representations of the world as it is, like the maps of “You Are Here.” Patterns are one-off descriptions of the physical change the computing is meant to affect in the world. And processes are the structures to widely reproduce those changes. (Kamvar admits that there’s a fourth, even more esoteric part of the work: Creating a programming language from the ground up with a focus on facilitating social interactions. It’s called Dog, though Kamvar reports that bringing it to life is probably a long way off.)

If you buy into that ambition, then crafting 10,000 different city maps seems less crazy than a necessary step toward understanding the social patterns that, in turn, inform the software you will build to make those changes more mindful.

“That’s the plan, at least,” Kamvar says, and though his team members have started with cities they know intimately, they’re eyeing an expansion to cities that stand out by virtue of having large populations, are centers of culture, industry or government, or are simply “places that people want to map.” The team has maps lined up — and it’s open to suggestions — though Kamvar won’t tell me which we’ll see next other than to say they’ll likely deal with topics like health, greenery, entrepreneurship, births and deaths. Maps, in other words, that “are markers of human life.”