The Future of Public Art in Five Phases – Next City

The Future of Public Art in Five Phases 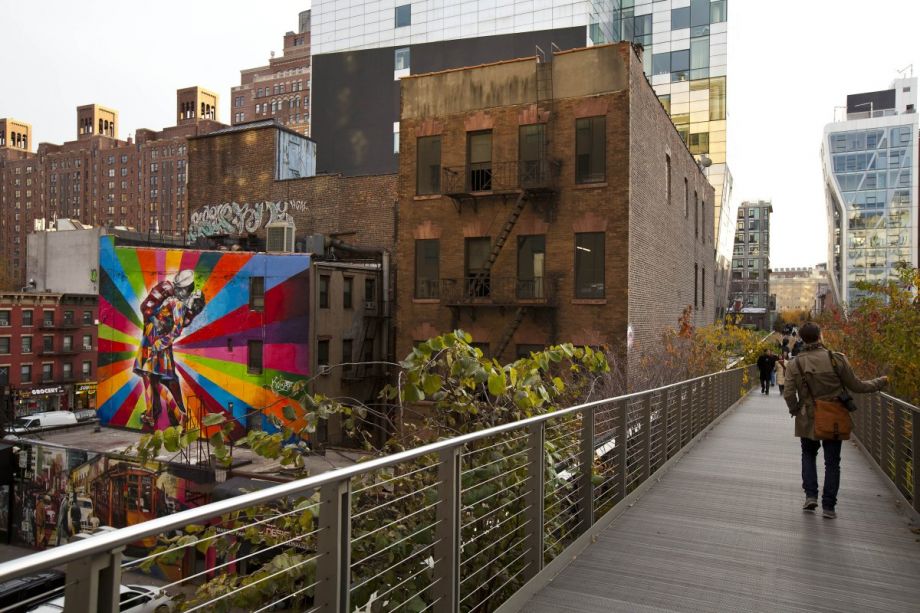 Editor’s Note: The following is an excerpt from The Future of Public Space, the second volume in the SOM Thinkers series produced by Skidmore, Owings & Merrill (SOM) and published by Metropolis Books. To celebrate its release, SOM has partnered with NextCity to host panel discussions in Washington D.C., Chicago and Los Angeles which will further the book’s exploration of how different types of public space — urban and rural, real and virtual — impact our everyday experiences in an increasingly privatized world. Visit som.com to learn more about this discussion series.

In the United States, the case for funding public art has always been about the larger questions that surround the idea of value and of the public good. The continuous, uneasy shifting of public art rhetoric can consequently be seen as where a recurrent artistic dialectic is played out in its most monumental form: aesthetics have been drafted into service to respond to various economic-political conflicts, yet also continuously find themselves at the mercy of economic-political shifts that they are not in control of.

Between 1940 and 1980, the economic geographic story in the US was one of regional economic convergence. But “starting in the early 1980s, the long trend toward regional equality abruptly switched.” Globalization and corporate consolidation meant that “a few elite cities have surged ahead of the rest of the country in their wealth and income,” leaving stagnation elsewhere.

Despite the gentrification that has made New York one of the most unaffordable places to live, it represents the winning side of the equation. Since the turn of the millennium, the Big Apple sucked in an increasing share of the United States new Creative Economy jobs.

The metropolis also used its position as cultural hub to spectacularly absorb larger and larger percentages of tourism flows. “In this recession, the country lost 6 percent of private-sector jobs and got about a quarter back,” Bloomberg said in 2011. “New York City lost 0.3 percent and got them all back. Why? Because we have the option to use tourism to replace growth.”

What does this mean, however, for the languishing rest of the country? The signature public arts theory of recent years is “creative placemaking,” formulated for the NEA in a 2010 white paper by Ann Markusen and Anne Gadwa, then adopted across the country with “unprecedented speed and coordination.”

In their introduction, the authors make clear the economic prognosis undergirding their vision:

For two decades, American cities, suburbs, and small towns have struggled with structural change and residential uprooting. The causes are powerful: an integrating world economy, accelerating technological change, and Americans’ proclivity to move. These forces unsettle communities and diminish returns on past investments in public infrastructure and in local networks and know-how.

Postulating that attempts to retain employers are futile, they then offer the arts as a solution:

Yet revitalization has come from an unexpected quarter. Mostly under the radar, unusual partners have made significant arts and cultural investments, leveraging resources from many funding sources. They create and provide jobs, nurture local businesses, generate spin-offs, revitalize local economies, and stabilize neighborhoods. They reinforce the nation’s global leadership in cultural industries, a major source of jobs.

In terms of strategy, “creative placemaking” is substantially eclectic (it is “asset-based,” in the lingo, looking to activate local resources first of all). It touts initiatives from Providence, Rhode Island’s WaterFire festival of river-bourn urban bonfires, to Paducah, Kentucky’s Artist Relocation Program, which lured artists to a blighted historic neighborhood with the promise of property ownership.

Observers note that “creative placemaking” draws on earlier theories of the “creative class” and “creative economy.” Yet, while it is far from consistent on this score, what appears distinctive about the new rhetoric is the degree to which it suggests using art not to attract or retain desirable residents or employers, but to replace industry via small-scale, local cultural initiative.

One notable feature of the post-2008 world was that economic austerity policies, once sadistically directed at Third World countries as part of their debt crises, came to be applied to the economies of the debt-ridden First World itself. It may be worth noting, then, that cultivating local tourist attractions, packaging local traditions, and selling handicrafts has long been the preferred development advice for Third World countries that lack industries competitive with more sophisticated foreign rivals.

If economic growth continues to be captured by the wealthiest layer of society, then the cities or regions that will continue to grow will be the ones that manage to transform themselves to cater to this layer. Yet because the spoils of this economy are so unevenly shared, and concentrated in a minority, growth must almost by definition be uneven and experienced by a minority of locations. It cannot be that metropolitan hubs like New York will suck up larger quantities of this attention at the same time that second- and third-tier cities all simultaneously transform themselves into vital sites of cultural tourism.

Thus, already, Markusen and Gadwa have both distanced themselves from the promises of their original paper. Other observers have stressed that “creative placemaking” initiatives function as part of a complex web of economic and governmental forces, and can only be held accountable for the very limited types of good that those small-scale public art projects can bring.

The clearest thinking about the subject comes from Mark Stern. Looking at the city of Philadelphia specifically, Stern mapped both poor and better-off neighborhoods that featured concentrations of cultural resources, and was even able to demonstrate the real benefits generated in terms of improved measures of communal well-being.

Yet, despite this, Stern noted that measured over time, “cultural resources in the city are increasingly clustered in the better-off neighborhoods,” particularly as a result of “a decline in cultural assets in Philadelphia’s low-income communities.” Put bluntly: organizations in poorer, largely African-American communities found it harder to sustain the level of cultural investment required to realize the promises of “creative placemaking.”

Stern sees this, finally, as a problem stemming from the limits of public art funding as urban policy itself:

Ultimately, creative placemaking initiatives are about making grants to organizations. Even when these initiatives require collaborations between multiple partners, they are likely to include only a fraction of the “cultural assets” in a particular neighborhood. The gap between culture’s impacts—based on the aggregate efforts of dozens of different organizations, informal groups, and individuals—and funding mechanisms—which identify specific organizations—will continue to pose a challenge to those who wish to link creative placemaking to a specific set of social benefits.

It is almost as if, when thought through rigorously, the question of “creative placemaking” pushes it up against the limits of its original frame as a strategy of leveraging modest investments in culture in the absence of economic growth. Realizing the promises of public art leads us back to the need for large-scale investment, and the economic redistribution between people and regions that this would entail.

Without more evenly distributed growth, whatever the fate of many individual worthy projects, the overall future of public art looks bipolar—because history has shown that public art’s meaning and prospects are always overdetermined by the tensions of the society that produces it, and our society has become wildly economically bipolar.

At one extreme, public art will likely be a symbol of the city as luxury commodity. At the other, it will be testimony to inadequate and under-resourced government policy. Or society itself will become more equal, and in the process create a new symbolism.

Ben Davis is an art critic living and working in New York City. He is the author of 9.5 Theses on Art and Class (Haymarket, 2013). He is currently National Art Critic for artnet News, and was formerly executive editor of Artinfo.com and an editor of The Elements of Architecture, the catalogue of the 2014 Venice Architecture Biennale. His writings have appeared in Adbusters, The Brooklyn Rail, e-Flux Journal, Frieze, New York, The New York Times, Slate.com, The Village Voice, and many other venues.