The Fukushima Meltdown Made Tokyo a Much Greener City – Next City

The Fukushima Meltdown Made Tokyo a Much Greener City 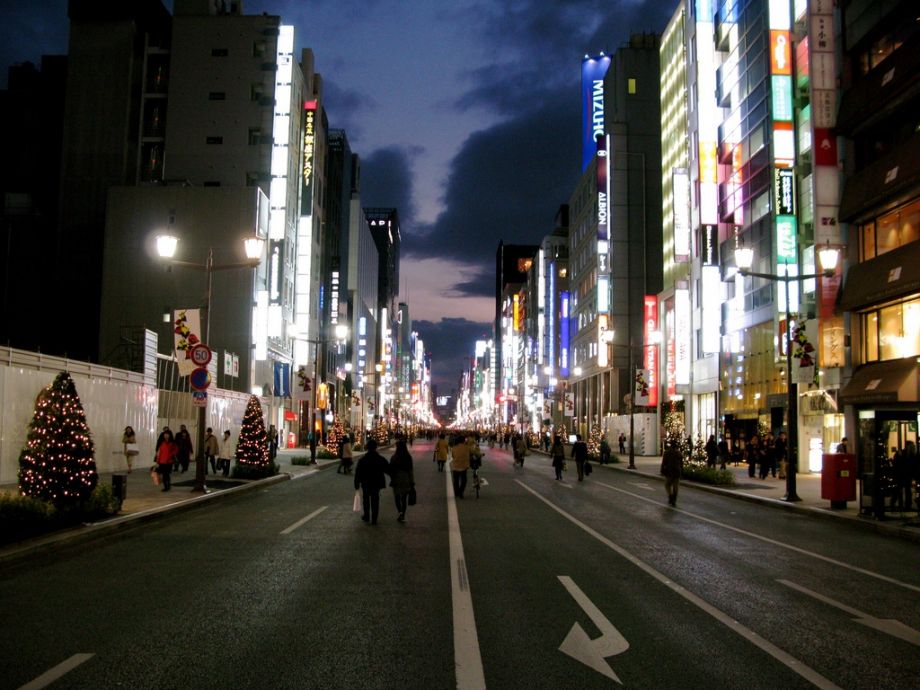 The Ginza section of Tokyo. Credit: David Spencer on Flickr

In March 2011, much of Tokyo went black. The kaleidoscopic glow from the neon signs on the streets of Ginza, Shinjuku and Shibuya disappeared during a period of rolling blackouts implemented by Tokyo Electric Power Company (TEPCO) to ease electricity usage in the capital following the crisis at the Fukushima nuclear reactor.

Tokyo, known for its all-night Blade Runner glow, seemed to briefly lose its identity. Naked without its neons, the city used this opportunity to develop a burgeoning appreciation for energy resilience. Residents emerged from the blackouts with a fresh understanding of their city’s electrical capacity, more like a pond that could dry up at anytime than an endlessly flowing river. As people made their way through darkened neighborhoods, the importance of having a resilient source of energy suddenly became apparent in this city of 35.6 million, the largest metropolitan area in the world.

Cities account for 71 percent of global energy-related carbon dioxide emissions, according to a 2008 International Energy Agency report. But most of these emissions don’t come from tailpipes and power plants — instead, most emissions are quietly generated by the buildings inside cities as they fill the cubic volumes of their rooms with cold air, heat and light. As urbanization continues apace, the 71 percent share of carbon emissions emitted by cities will surely increase. Already, Tokyo consumes more of the energy produced by Japan than the rest of the country put together.

But the ongoing crisis at Fukushima — a disaster that literally can’t be contained — has forced Tokyo to seriously reconsider how it consumes energy. While the government struggles to find more supply, the Tokyo Metropolitan Government (TMG) is targeting demand. You’d assume that with over 35 million residents squashed into 13,500 square kilometers, reducing the demand for energy in Tokyo would be difficult. But the TMG has been surprisingly successful, perhaps, at least in part, because there are so many existing inefficiencies that can be easily improved.

The Fukushima disaster created an opportunity for the government to push policies mandating energy conservation.

In the months following the tsunami, nuclear reactors across the country were taken offline, and residents experienced a new kind of spatial jamais vu as familiar spaces became alien. Shinjuku’s bright urban canyons went dark as neon lights flickered off, and by day, the normally air-conditioned offices of Nihombashi were transformed into furnaces in Tokyo’s humid summer. The result was a craving for conservation, providing a window of opportunity for the TMG to encourage existing policies that were heretofore considered too difficult or commercially risky. The city focused its scope on 1,400 of Tokyo’s large-scale offices and industrial facilities, requiring them to declare and cut their carbon emissions in a cap-and-trade program. It was the world’s first program limiting the emissions of existing city buildings specifically. These 1,400 structures – office high-rises, public buildings, commercial facilities, industrial factories – are together responsible for a whopping 40 percent of Tokyo’s total carbon emissions.

Under the new policies they will be required to lower their emissions levels (based on an average of three chosen years from 2002 to 2007) first by six to eight percent, and by 17 percent by 2020. Those who don’t meet the limit will be fined ¥500,000, charged a fee (to make up 1.3 times the reduction shortfall) and perhaps most crucially, be publicly identified as having failed, shaming their owners. Those who meet the limit will receive public praise and certification as energy efficient buildings. While previous programs were voluntary (and not particularly successful) the cap-and-trade initiative has had a success rate of 93 percent. In September the program won the inaugural C40 & Siemens City Climate Leadership Award. According to Yuki Arata, director of the Tokyo program, stakeholders were initially against the initiative, but eventually “we achieved 23 percent CO2 reduction,” he said in a speech at the awards ceremony.

It’s not just about percentages, however. Energy efficiency buildings must be livable, too. In June of 2011, months after the earthquake, tsunami and nuclear meltdown, Dana Buntrock, professor of architecture at Berkeley, who has been studying Japanese construction since the 1980s, visited Tokyo to hold a conference on the experiential dimension of energy efficiency – the “social implications to energy,” as she put it. Writing via email from California, Buntrock points out that, perhaps surprisingly, “Most structures [in Tokyo] are built without any major energy-saving features. When it comes to simple, inexpensive technology like insulation and thermal bridging, Japan’s buildings resemble ones found in the U.S. and Europe prior to 1973.” According to Buntrock, the biggest hurdle “is public and professional awareness,” as architects and building owners struggle to understand how spending more not only saves energy and money in the long term, but also makes the space more comfortable today.

Regardless of the kind of shortfalls highlighted by Buntrock, by the end of 2011 Tokyo had seen a reduction of almost as much carbon dioxide as Ghana or Uruguay emits in a year. This reduction was made primarily through management of each building’s air-conditioning and ventilation; equipment was upgraded and temperatures and times of use were monitored. Lights were replaced by high-luminance guide lights and LEDs, or fitted with motion sensors to automatically switch off when not needed. Water use was tracked and limited by, for instance, making hot water available only during winter. According to Buntrock, however, there is still much work to be done. Japanese architects, she feels, still need “a broader awareness of the best tools and techniques.”

The decade ahead will require more than just careful monitoring of how Tokyo uses air-conditioners. In an interview with the Japan Times in September, Joichi Ito, director of the MIT Media Lab, said the success of future cities will depend on their ability to integrate information technology into their systems and frameworks. This is the broad new world of tools and techniques: utilizing environmental data, metrics and user-generated information to help further bring down emissions. Truly smart buildings are a ways off, but they’re an important goal for Tokyo to fix its eyes upon.