The Front Lines of the Blight Fight: Part II – Next City

The Front Lines of the Blight Fight: Part II 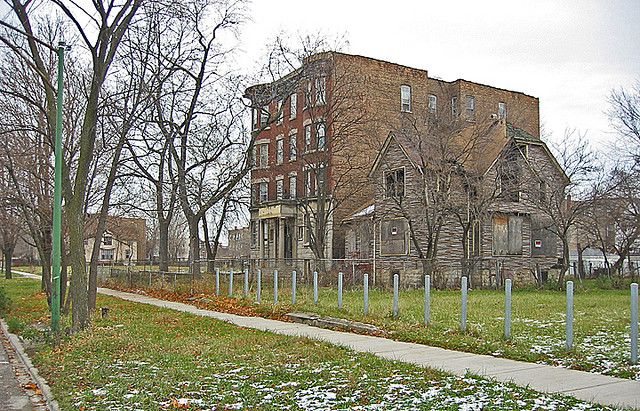 For a recap of day one, please click here.

It was no accident that the Reclaiming Vacant Properties conference was held in Cleveland, a city that “looked like a punch drunk fighter” after the subprime lending tsunami took its toll, Chicago journalist Alex Kotlowitz noted in his keynote address to open the second day of the conference. Kotlowitz revisited Cleveland, the focus of his New York Times Magazine cover article “All Boarded Up,” which he wrote a year ago. Despite a slowdown in foreclosure filings, Cleveland and Cuyahoga County’s are about to top 11,000 for a fifth straight year. He chose Cleveland because he was a witness to a city “pushing back.”

Kotlowitz was inspired by the likes of Cleveland Housing Court Judge Raymond Pianka and his compassion for those foreclosed upon. “He asked each of them, ‘how did you get into this predicament?’” Eventually, Pianka tried banks in absentia and fined them when they didn’t appear on contempt charges. Kotlowitz urged the 1,000 attendees to “give voice to what you see. It’s important that you tell the stories; the very act of telling stories is an act of hope. It’s an acknowledgement that people are pushing back.”

During the Q&A, I asked Kotlowitz why more relief and response isn’t forthcoming from the federal government. “I don’t think there’s a sense of the urgency in Washington,” he said. “I think what efforts are taking place are local.”

That said, new federal initiatives were the topic of the morning session, “Place-based Policies: Vacant Properties in the New Federal Policy Agenda.”

“With the Neighborhood Revitalization Initiative announced (two weeks ago), we have a federal government that wants to fund through small competitive grants, not large scale programs,” said moderator Jeremie Greer of Local Initiatives Support Corporation.

The Sustainable Communities grants, announced during the conference, will provide, perhaps for the first time, millions of dollars for regions to draw up and implement a plan coordinating land-use, transit and affordable housing. In addition, $1 billion for a third round of Neighborhood Stabilization Program funds were announced last week as cities continue to demolish the most blighted properties. NSP III bill sponsors sought $2 billion, but opposition lawmakers cut it in half, questioning its usefulness. It’s indicative of the fight ahead for the Livable Communities Act and others.

“The new federal programs may overcome the silos, but what’s missing is a champion in Congress whose name isn’t Chris Dodd,” said James Brooks of League of American Cities. “Don’t put money on Congress passing Sustainable Communities legislation. I don’t see the push from Congress to get this to scale.”

Absent a cohesive urban revitalization strategy from Washington, states, regions and metropolitan areas have been left to craft their own solutions. In Memphis, Tennessee the private sector and community development corporations are teaming up. In Michigan, home values declined so precipitously (52%) that 24 cities formed a foreclosure response team to acquire 6,250 properties with a collective $224 million in NSP II funds.

“Coordinated planning with NSP is difficult,” said Jane DeMarines, Council of State Community Development Agencies, the pass through for state NSP awards. “There’s money, but it’s not enough to have a comprehensive development strategy if a city only gets enough to redevelop a few houses.”

Plenty of good grassroots efforts are out there, DeMarines said, from the “Creative Core,” chambers of commerce from a 12 counties in the Syracuse region working on a place making initiative to Chattanooga, once the most polluted city in the country, now turning around its fortunes with an urban revitalization plan.

“Place making is about tangibles,” Brooks agreed. “Chattanooga turned Walnut Street Bridge into a pedestrian bridge, it has an arborist working on reforestation. It happened on the scale of 40 years.”

Buffalo’s People United for Sustainable Housing (PUSH) has relied on bold gestures (like putting the governor’s face on foreclosed properties) and risk-taking in the form of purchasing vacant properties to create 24 urban gardens and a 1.5 acre urban farm. The gutsy nonprofit is led by Aaron Bartley, a former community organizer, and a board president who was a line cook. The group started a small green jobs training center and recently built its first Net Zero house. If it were not for groups like this, who knows what predicament our cities would be facing?

The third and final day of the Reclaiming Vacant Properties conference had an almost festive atmosphere that you find at the end of a long conversation about weighty issues, such as, how are cities faring and what will make them vital again? (Perhaps it was the visits to the Rock & Roll Hall of Fame and the E. 4th Street District, an adaptive reuse success story and home to Iron Chef Michael Symon, local foodie darlings Greenhouse Tavern and a bowling alley – very Cleveland).

The morning leading up to the keynote luncheon by HUD Secretary Shaun Donovan began and ended (for me) with sessions that exemplify the beauty and bounty of urban land reuse. They provided examples of what Cleveland Mayor Frank Jackson calls the “self-help economy”: growing food, gardens that act as healing spaces, and one super cool bi-racial couple in Flint, Michigan who parlayed a karate studio into urban farming under the pretext of a self-defense regimen.

In the “Activating Vacant Land and Preserving Urban Green Space” session Miriam Avins highlighted the important work of Baltimore Green Space, the nonprofit she heads and which is systematically conveying publicly owned land already used as community space (through a self-help nuisance abatement) to land trusts for permanent preservation. The results are stunning: The Duncan Street Miracle Garden is a 20-year-old organic community garden on what was a site of trash dumping and violent crime. Today, Avins says, while flipping through slides of lavender coreopsis beds in the shape of a cross and rows of greens against a backdrop of low-rise public housing, 50% of the food produced at the garden goes back to the community through food pantries, soup kitchens and the gardeners.

Feeling buoyed, I dip out and catch the tail end of the “Vacant Properties Clinic: Diagnosing Problems and Finding Practical Treatments.” It’s the Q&A and the panel has been asked to respond to the issue of finding the responsible party on Real Estate Owed property.

“The problem with county records is the company who owns the lien could be a multinational,” says Jennifer Leonard at the Center for Community Progress. “By the time a citation hits their desk, it could be three months, and who knows if it’s going to the right person.”

One possible solution is to tap the powerful industry database of Mortgage Electronic Recording System (MERS) which assigns a number to every loan that stays with that loan regardless of who buys it. The database makes available the individual within the multinational who is responsible for that loan and their contact information.

I ask the panel how a city could encourage block clubs, as we’ve seen in Cleveland, tp do more guerilla gardening on tax delinquent property. David Park says his employer, the Kansas City, MO government, has an “adopt-a-lot” policy that will pay neighbors who are interested in mowing or gardening on a vacant lot next door out of their general maintenance fund.

Dora and Jacky “grandmaster” King are taking a streetfight to the vacancy issue with the Harvesting Earth Farm in Flint. “We’re trying to build a local place-based economy that can’t pick up and leave like the auto industry,” Jacky, an 8th degree black belt in Karate said during the “Beyond Community Gardening: Building a Local Food Economy” session. “It’s a holistic approach on how to defend yourself.” With support from the Mott Foundation, Dora and Jacky set up a homesteading operation – their house is across the street from their city farm where they spread the gospel on growing and eating fresh food, working with kids on building their bodies and self-esteem. “You have to be part of your community before you can change things,” Dora says.

“Land isn’t something you can grow,” Jacky adds. “They took all of our jobs, but the (Genessee County) land bank has land for $1. Now we have chickens, bees, goats and a tractor. We have distribution and value-added products. We have to recreate our economy and leave seeds to the next generation.”

At the keynote luncheon, Shaun Donovan, secretary of the U.S. Department of Housing and Urban Development, announced a $4.25 million grant to the Northeast Ohio Areawide Coordinating Agency (NOACA) to promote the creation of a regional smart growth plan. It is one of 45 Sustainable Communities Regional Planning grants issued by the Obama administration, totaling $100 million. One of the primary reasons NOACA was approved for a grant, Donovan said, was because it is a multi-county, multi-stakeholder agency that stands to impact thousands.

“It’s the biggest federal planning investment in a generation,” Donovan said. “We’re going to invest in this generation and the next to have more transportation choices, energy efficiency and jobs.”

“We’re going to turn neighborhoods around because of you who are committed to the cities that make this country great,” he continued. “It’s appropriate that we’re here in Cleveland. Ohio has felt the pain longer with population and job loss. The problems we face keeping people in their homes we will root out and stop. We cannot stop every foreclosure, but we plan to partner with state’s attorney general to help servicers get it right.”

Donovan pointed to efforts like the Cuyahoga County land bank and HUD’s new agreement to give “First Look” priority to the land bank before tax delinquent properties face foreclosure.

“We should be creating wholesale strategies,” he added, pointing to Montgomery County and Huber Heights, a suburb of Dayton that faced 30% decline in housing values with 1-2 vacant houses on every block. The county targeted all of its NSP funds to acquire and rehab 35 homes to high energy efficiency standard. Property values have stabilized.

“As serious as the challenge is you face, you have a federal partner ready to help you make tough choices ahead.”

“We need to focus on vacant and abandoned properties not just as a problem, but as a resource,” said Dan Kildee, president of the Center for Community Progress, “Vacant houses can be turned back into homes. Obsolete factories can become incubators for emerging technologies. Even older cities that are losing population can maintain strong downtowns and neighborhoods and also replace blighted areas with green space.”