The Front Lines of the Blight Fight – Next City

The Front Lines of the Blight Fight 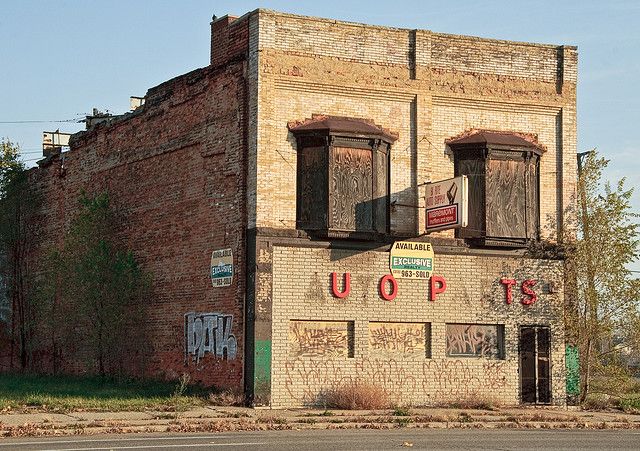 One thousand practitioners gathered in Cleveland this week at the Reclaiming Vacant Properties conference to share what metro areas still reeling from the foreclosure crisis and the recession are doing to turn around a glut of boarded up buildings and vacated land. The latest statistics put vacated properties in the U.S. at five million acres, the size of a small country, U.S. EPA’s Joseph Dufficy said during a session titled, “Decision Making for Alternative Site Reuse.”

Many cities in the Midwest, including Toledo, Cleveland, Youngstown, Detroit, Pittsburgh, are struggling with double-digit vacancy rates. But there are innovative solutions taking hold: The Toledo Botanical Garden, for example, through its Toledo GROWS program, is raising 2,500 tilapia in an aquaculture system, devised vertical grow systems for seniors that rise above concrete or contaminated lots, and worked with an urban church to build a greenhouse that offers employment to at-risk youth. “The Greenhouse Project is a (Department of Justice) Weed and Seed project,” explained Toledo GROWS’ Michael Szuberla. “Felton Earls at Harvard found that strong interactions between adults and youth result in communities that are less affected by crime. We argued to DOJ that gardening is a crime-prevention program.”

Comprehensive plans and coalitions pushing for new place-based strategies for vacant land reuse were the focus of a session titled, “Re-Imagining America’s Older Industrial Cities.” “We’re talking about cities that are smaller but stronger,” said Presley Gillespie of Youngstown Neighborhood Development Corporation. “We’re taking over 150 vacant lots in our south side neighborhood of Idora and committing them to urban agriculture. We’re taking a page from Cleveland. We’ll have a six-acre plot where we plan to demolish vacant properties and turn it into a community garden that will serve 150 families.”

Day one also covered issues of who holds title to real estate owned (REO) properties, moving land acquisition to scale through county land banks, devising strategies to fill in the gaps on local food distribution and creating plans for large catalytic projects such as restoring land in historic waterways. Some argued the vacant land efforts still lack the capacity to address the scale of the problem, even as the crisis response is bringing more capacity online.

U.S. EPA Region 5’s Brooke Furio offered Cincinnati’s Lick Run, a culverted historic waterway, as a test site for creating market demand for vacant land as new riverfront property. If it works, it would rank with the wetland park at Philadelphia’s Saylor Grove as a vacant land scheme that doubles as a watershed-scale problem. Arguably, this is the Holy Grail (or white whale) of vacant land advocates: replacing a combined sewer/sanitary pipe with a natural system, or, as it’s known in the business, with green rather than grey infrastructure.

“(Green) is more complex and complicated than a pipe,” Furio said. “You have to get a lot of people to the table and it’s messy. But the pipe comes with a lifespan. It’s another liability on the community.” The community in question has depopulated and as a result the city’s bond agent, Moody’s, made it clear it could downgrade the city’s rating if it spent hundreds of millions of dollars on an underground storage pipe without the tax base to pay it off. “The city realized they had to build something beyond a pipe. They began to see this as a way to increase habitat, clean up brownfields and reduce the supply of vacant land.”

The conference kicked off with tours of Cleveland’s vacant land reuse efforts, which earned attention for creating a common language and roadmap for change for a multi-party initiative known as ReImagine a More Sustainable Cleveland. In Cleveland neighborhoods like Hough, which has struggled with chronic poverty since it burned during the riots of the 1960s, are experimenting with the help of a suite of urban agriculture ordinances that allow chicken coops and beehives in backyards and farming as a primary use, including farm stands, in residential areas. It’s a shot in the arm for Mansfield Fraser, proprietor of the vineyard at Chateau Hough, for CityGrowers, who rented a plot on a defunct school demolished and converted into a 2-acre urban farm, and for Tim Smith, who is chasing his dream of a commercial greenhouse on an empty parking lot of a church. Urban agriculture has implications for those trapped in food deserts and young college grads looking to start a business alike.

“We’re not going to achieve the ideal pattern of dense neighborhoods with pristine green spaces,” Cleveland Planning Director Bob Brown said. “Cities like ours have limited resources. We’re not in the business of deciding which areas to turn out the lights, we’re going to target where the market decides to go.”