The End of Government-Sponsored Sprawl? – Next City

The End of Government-Sponsored Sprawl? 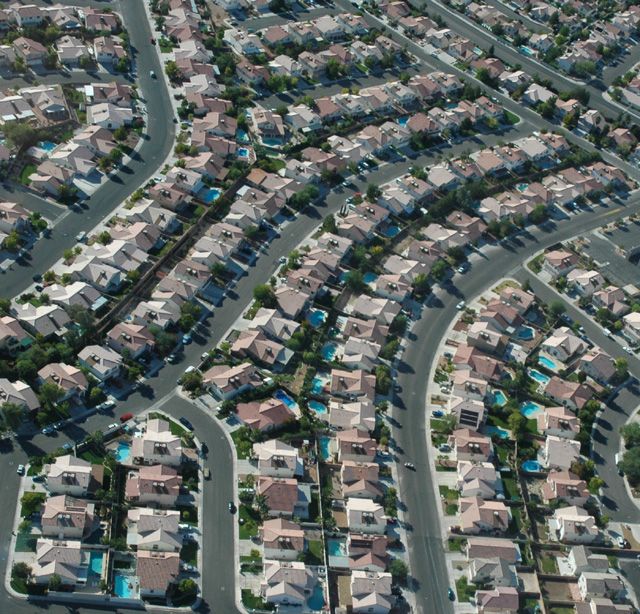 A suburb of Las Vegas. ulybug

About four years ago, libertarian journalist John Stossel — who famously got punched in the face by a professional wrestler for asking if professional wrestling was fake — took on the topic of suburban sprawl with his typical gusto, and for some reason it is just making the rounds on the blogosphere. In the text version – dated May 9, 2006 — of what was apparently a 20/20 segment titled “Myths, Lies, and Nasty Behavior” he put “Urban Sprawl Is Ruining America” down as a “myth.” “Suburban sprawl is evil,” he wrote, assuming the voice of someone not as sharp or grammatically adept as he is, “The unplanned growth, cookie cutter developments is [sic] gobbling up all the space and ruining America. Right? Wrong.” He goes on to create a straw man version of the anti-sprawl argument: that critics of sprawl are primarily upset about an impending loss of open space. This he handily defeats by pointing out, without even having to cite his source, that 95 percent of the United States is completely undeveloped.

He ultimately concludes that “smart growth is dumb,” “[destroys] the lives of poor people”, and further, that people like living in the suburbs, so why should we stop them? Many bloggers have pointed out how ironic it is that a so-called libertarian would defend suburbia on the grounds of free market ideals, when it is the most regulation-laden landscape on the planet. Austin Bramwell, writing for the American Conservative, points out that sprawl is “mandated by a vast and seemingly intractable network of government regulations, from building codes to street design regulations. If Stossel wants to expand Americans’ lifestyle choices, he should attack the very thing he was defending.” At the other end of the political spectrum, Matthew Yglesias at Think Progress takes the reader on a tour of suburban Phoenix zoning ordinances, and shows how they permit only sprawling development, thanks to rigid building codes and lot coverage/usage laws.

Fortunately for those of us who don’t believe that Thomas Jefferson’s vision of democracy was firmly grounded in regulating street width, setbacks and lot coverage, there’s Senator Chris Dodd (D-CT). Earlier this month – soon after announcing that he’d retire in January 2011 – he pledged to do his best to pass the Livable Communities Act, a $4 billion bill that aims to establish an Office of Sustainable Housing and Communities at HUD and an Interagency Council on Sustainable Communities at the White House, and help empower the federal government to fund smart growth projects at regional and local levels. It was introduced by Dodd last year, and is still in committee, and was recently introduced in the House by Congressman Ed Perlmutter (D-CO) with 20 co-sponsors. Included in the bill is a provision to “implement local zoning and other code changes necessary to implement a comprehensive regional plan and promote sustainable development,” which would hopefully help fund some projects to help curb sprawl, instead of helping it spread, which is what the federal government has been doing for years, many argue.

To the John Stossels of the world, it probably sounds like the bill just introduces more bureaucracy to Washington with new departments at HUD and in the White House, and more to local governments through its inclusion of regional planning authorities in the grant awarding process. At the federal level, that’s hard to argue with, and which side you take on an argument of that nature mainly comes down to ideology. On the local level, however, regional planning authorities are precisely the organizations that could help cut through local governments’ red tape and arbitrary boundaries that often present obstacles to effective local planning. One of the criteria for being awarded a “Sustainability Challenge Grant” – the larger, capital-projects-oriented of the two proposed grant programs – is “[identifying] original and innovative ideas to overcoming regional problems, including local land use and zoning (or other code) obstacles to carrying out the comprehensive regional plan”. So, it might create some bureaucracy at the federal level, but it also creates the tools – and more importantly, the funds – to overcome it at the local level.

I had the chance to speak with Kate Rube, the Policy Director at Smart Growth America, a non-profit advocacy group based in Washington D.C., and she helped explain what the bill is all about. Kate explains that the main problem the bill seeks to overcome is that “all the land use planning that happens in this country, happens at the local level. All the decisions about zoning, and land use codes, and regulations about what can be built where, that’s all at the local level. One of the problems is that [many] transportation investment decisions are made at the regional level.” The bill aims to help integrate all housing, transportation, and environmental policies on a regional level, with money from the federal government as a nudge in the right direction. As Rube points out, “the way that the federal government and many local governments deal with different issues is in silos…you have a housing plan, and totally separately with a completely separate group of people you have a transportation plan, and then completely separately with another group of people you have an environmental plan, all for the same region. And what this bill is largely about is recognizing the important connections between those issues.” And, Kate elaborated, when we don’t have an integrated approach to this type of planning, we waste resources and do a disservice to our communities.

In order to overcome this compartmentalized, inefficient approach to regional planning, the bill offers grants to local and regional authorities both for, let’s say, updating their regional plans to support Transit Oriented Development, or for funding new transit projects they might not have been able to afford otherwise. The bill creates a system of competitive, merit-based spending, instead of the pork barrel spending on roads that almost led to the creation of the now-infamous Bridge to Nowhere. “The idea is to really incentivize good performance,” says Rube, “and that is definitely unique about this program. There aren’t a lot of major competitive grant programs at the federal level.”

Of course, given some legislators’ cargo cult approach to lawmaking, this aspect of the bill has already become an issue. Senators from rural states have begun suspect that they would not be getting enough money for their constituencies from the bill. It’s ironic that it will most likely be lawmakers from Red States – and confused libertarians like Stossel – who might ultimately oppose the free market-style competition built into the Livable Communities Bill. Rube points out “there’s nothing in this bill that says ‘this is money for urban areas or metropolitan areas.’ This is money to support integrated regional planning that results in sustainable communities, and there’s nothing about that type of approach that’s inherent to urban areas.”

Obviously, should this bill get the attention of the mainstream media, Glenn Beck will most likely tell you that the federal government will soon be bulldozing your ranch house and replacing it with a housing project/methodone clinic/Obama Youth Training Center. But Rube points out that these types of bills are rarely controversial, and often get attached to other big-ticket bills as riders, and get passed in that fashion. Should Congress get back to the business of making and passing laws soon (Update: Whoa!), there’s actually a chance the bill could pass. Dodd is the chair of the Senate Committee on Banking, Housing, and Urban Affairs – the committee that the bill will have to be voted out of – which is a good sign (bad sign: Richard “Blanket Hold” Shelby (R-AL) is also on the committee). The House bill also has the support of Barney Frank (D-MA) who is the Chairman of the House Financial Services Committee, another good sign.

Should the bill pass, it will be a great step towards implementing sustainable, smart planning across our sprawling nation. Even if it doesn’t, the Department of Housing and Urban Development has already set up a pilot-program of the Office of Sustainable Housing and Communities, which is included in the bill. They can move ahead without Congressional approval, but the bill’s passage will make the office more permanent. Still, there’s plenty of work to be done, and the $4 billion set aside for the Livable Communities Act is a drop in the bucket when you compare it to all the other transportation and infrastructure money that gets allocated at the federal level.

Next week, we’ll take a look at the larger forces in federal transportation spending policy that promote sprawl.