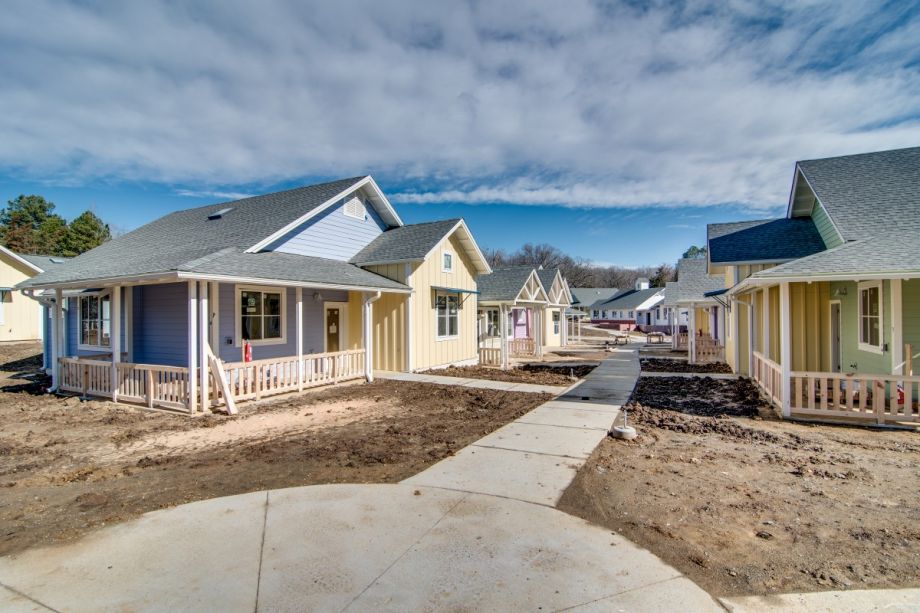 Village Hearth is a co-housing community for LGBT seniors at the edge of Durham, North Carolina. The homes are nearly ready to move into, but “Around the time we’re closing, it may be the time that no one should be going anywhere,” says Pat McAualay, who with her wife Margaret Roesch, have spent the last half-decade planning for, financing, and developing the community. (Photo courtesy Pat McAualay)

Pat McAualay and Margaret Roesch were supposed to be celebrating.

The couple, both retirees from Durham, North Carolina, have spent more than half of the last decade planning for, financing, and developing a new co-housing community for a group of fellow LGBT seniors, as Next City reported last year. Along with a few dozen other buyers, they were planning to close on their new homes at the end of April. So far, McAulay says, the construction of the homes at Village Hearth remains on schedule. But a recent malware attack in Durham has shut down the Register of Deeds, putting real estate transactions on pause. And the coronavirus outbreak has thrown their plans into question — limiting their ability to show the four remaining available properties to potential neighbors, and potentially preventing people who have already quit their jobs, ended existing leases, or sold their other homes from moving in.

“Around the time we’re closing, it may be the time that no one should be going anywhere,” McAulay says. “So all of these carefully laid plans may go out the window.”

And, she adds, “The loan is going to come due whether we’re ready or not.”

The COVID-19 pandemic has thrown every aspect of society into disarray. But for seniors, who can be particularly vulnerable to the disease, the outbreak presents particularly thorny challenges to staying healthy and well-stocked with supplies while maintaining a sense of community with neighbors and families. In co-housing communities like Village Hearth, community rituals are central, with residents’ homes placed closed together and designed around common spaces. Often, co-housing residents come together for meals in a common kitchen. Village Hearth would be the perfect place to ride out the pandemic shutdown, McAulay says.

“We’re really wishing we were there already,” she says.

Around the country, co-housing communities like Village Hearth — not all of which cater exclusively to retirees — are sharing tips on how to stay both safe and connected during the outbreak. In webchats hosted by the Co-Housing Association of the United States, residents have talked about suspending events and common meals, disinfecting common areas, limiting outside visitors, and holding community meetings via Zoom and other video conferencing tools in order to prevent potential local outbreaks. They also say they’re moving other social rituals and religious services online, and hosting virtual game nights with house rules, like docking points for players who touch their faces.

For Christopher Ross and Allan Keech, another Village Hearth couple, the chance to age among a community of peers — to avoid isolation — was the primary draw of co-housing. And isolation is now the very thing that the pandemic response requires. But Ross says for now, they are keeping up their morning walking ritual, and taking advantage of the seniors-only policy during the first hour of business at their local Whole Foods. They’re hoping move-in dates won’t be affected, and that they can have porch-to-porch conversations at Village Hearth even if they have to keep socially distancing.

“Personally, I am trying to think of this period as a gift of time in which to deepen my meditation practice and plow through the books sitting in my to-read pile,” Ross says.

In other communities, like the Silver Palm Place mobile-home park in Miami-Dade County, the outbreak adds an extra layer of uncertainty to an already challenging living situation. Last year, in response to a rent increase imposed by a company that bought the park from the previous owners, residents formed a homeowners’ association to organize efforts to negotiate with their new landlords. They’ve been paying the increased rent under official protest for the last year, says Angel Mendoza, a resident of the park. And now they’re worried that after dragging their feet in response to the residents’ legal protest for the last year, the company is going to try to raise rents again. The company has already asked for residents to start paying rent online, rather than by check — a challenge for many of the park’s elderly residents, Mendoza says.

“If this first increase is putting our people in real dire problems financially, a second one will completely — that’s it,” Mendoza says. “We’ll probably see some evictions or have to take some cases to court.”

Among the retirees living at Silver Palm Place, Mendoza is on the younger side. In the first week of March, he and his wife traveled to Puerto Rico, where they own an apartment, to do some repairs on their property and get it ready for hurricane season. They were planning to return to Florida on March 14. But Mendoza, who has COPD and asthma and underwent an operation for prostate cancer last fall, says it quickly became clear that they shouldn’t travel. The island is under a curfew from 9 p.m. to 5 a.m., and Mendoza says there are long lines to get into supermarkets.

“There’s a lot of mixed messages going on,” Mendoza says. “I just received an email saying that the president wants to open the country by Easter no matter what the medical community says. It’s very crazy to hear these messages, but one thing is real: There’s a lot of dead people and the curves are starting to go up.”

For now, Mendoza says, the apartment suits their needs, and he is able to keep in touch with his three sons in Miami and Tallahassee. He and his wife stand in the doorway and talk with a neighbor across the way. He says he heard from his neighbors at Silver Palm Place that the main office is shut down, and residents are generally following social-distancing protocols and staying in their own homes.

The outbreak presents competing challenges — to stay apart, and to stay connected. For Pat McAulay, a regular singalong hosted online by Melissa Etheridge has become something of an anchor in the daily schedule. And she and other soon-to-be Village Hearth residents near and far are finding ways to socialize amid the shutdown of public life.

“Thursday night we had a happy hour with our buddies who live half a mile down the road by Zoom or FaceTime or whatever,” McAulay says. “And by Friday and Saturday, local people were coming by one by one, and they sat out in our front yard while we sat on our patio to visit. So we’re getting local support here and a ton of people are calling to check in. We are a community and it’s still coming through, even though we’re distant.”