The Casualties of Phnom Penh’s Real Estate Boom – Next City 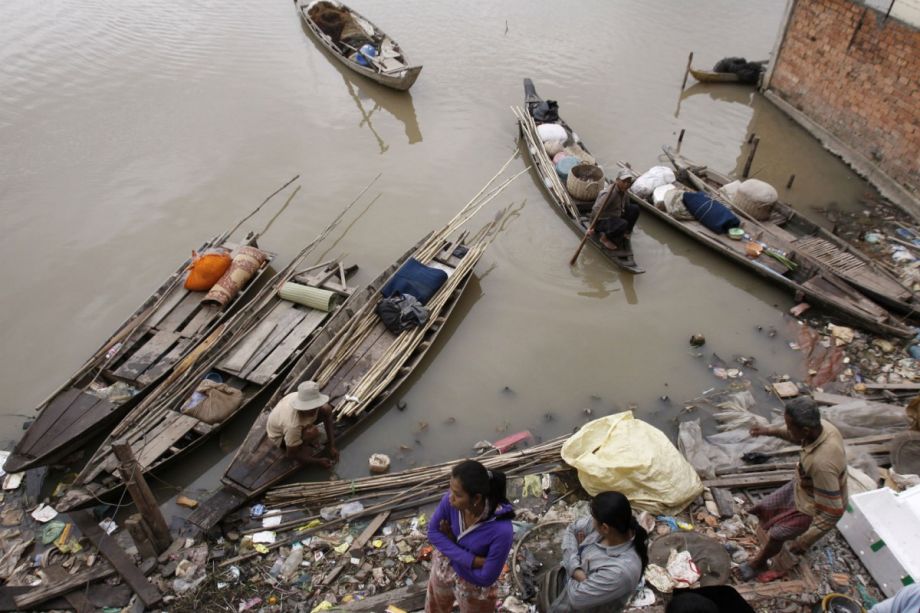 Approximately 4,000 families were evicted from their homes when the city of Phnom Penh leased the Boeung Kak Lake and its environs. The lake is now completely filled with sand. Credit: AP Photo/Heng Sinith

On February 14, security forces stormed Borei Keila, a commercial and residential development site located in the heart of Phnom Penh. Wielding batons, they forcefully removed families who were occupying an unfinished building. The squatters responded with a barrage of rocks. Security forces reciprocated. At least seven people were seriously injured.

Phan Imex, a politically connected company that was awarded a contract to develop the 4.6-hectare site in 2003, had promised to build ten apartment buildings for Borei Keila’s original 1,776 families in exchange for rights to develop 2.6 hectares of their land. Only eight buildings were completed at the site, however, leaving 300 families in the lurch. Some of these families eventually accepted land on the extreme outskirts of the city as compensation — areas lacking basic amenities like electricity and running water, as well as services such as hospitals and schools. The remaining families, who moved into tents and construction sites at Borei Keila, saw their makeshift homes bulldozed amidst a barrage of tear gas and rubber bullets in January 2012. To draw attention to their continued struggle, 30 people reoccupied Borei Keila on February 12. After the latest eviction, a fence was erected around the site and the remaining families were rendered homeless.

“We are just demanding our right to live in a home, because it has been two years now and still there is no resolution,” one woman told The Cambodia Daily in the wake of the most recent crackdown. “In Cambodia, there is no justice for victims.”

Sadly, this is not an isolated incident. As Phnom Penh mushrooms, the city’s urban poor are being removed from their homes with little or no compensation to make way for commercial and residential developments. The trend is being repeated elsewhere in the country as well, with entire villages forcefully relocated for the sake of foreign-backed sugarcane and rubber plantations. According to Cambodian human rights group LICADHO, more than 400,000 Cambodians have been affected by such land concessions since 2003.

At the center of this issue is the fact that few Cambodians possess adequate land titles. When the ultra-Maoist Khmer Rouge swept into power in 1975, they abolished private property, destroyed existing land records and forcefully emptied Phnom Penh of its residents. The Khmer Rouge’s bloody agrarian experiment ended when the Vietnamese army invaded Cambodia in late 1978. Soon after, people began trickling back to Phnom Penh, a city that had turned into something of a ghost town. Many squatted in the shells of existing buildings while others built makeshift homes on abandoned plots of land. These settlements turned into communities, and for the first time in years, people’s lives began to take on a semblance of normalcy that would be shattered when evictions began in the wake of an economic boom that seized Cambodia in the early 2000s. Such evictions intensified after a 2008 election that saw the ruling Cambodian People’s Party (CPP) win a sweeping majority.

“After the election, the ruling party basically thought they could get away with anything,” says Ou Virak, president of the Phnom Penh-based Cambodian Centre for Human Rights (CCHR). “They grabbed land, then split the proceeds amongst the ruling elite… Such evictions are almost always illegal.”

According to Article 30 of Cambodia’s 2001 Land Law, “Any person who, for no less than five years prior to the promulgation of this law, enjoyed peaceful, uncontested possession of immovable property that can lawfully be privately possessed, has the right to request a definitive title of ownership.” The majority of Borei Keila’s residents, for example, occupied the area in and around 1992. Until recently, however, few of the country’s poor have sought such documentation. Article 5 of the Land Law, moreover, states that “No person may be deprived of his ownership, unless it is in the public interest. An ownership deprivation shall be carried out in accordance with the forms and procedures provided by law and regulations and after the payment of fair and just compensation in advance.” To circumvent this, the Cambodian government will often accuse people without land titles of living on state public land.

According to Virak, the largest forced evictions in Phnom Penh have been matters of land speculation, not “public interest.” Possessing adequate land titles, moreover, is no guarantee against eviction. “If you look at the three biggest evictions in the past seven years, almost all of them are related to land speculation,” Virak says. “These have affected nearly 7,000 families, and all of these places are still empty plots.”

Perhaps the most visible of these eviction sites is Boeung Kak Lake. In 2007, the city of Phnom Penh leased the 90-hectare lake and its environs to a firm owned by a ruling party senator. As the company began filling the lake with sand toward the end of 2008, the area’s 4,000 or so families were given a choice to accept new land on the outskirts of the city or a paltry cash settlement. Some 3,000 relented. But others remained to fight, and continued demonstrations and subsequent violent crackdowns have led to international pressure. As of today, all but 60 families have received compensation packages or land titles in the area. The lake, however, is now completely filled with sand, putting a major strain on the city’s ability to deal with storm water. And despite computer-rendered images of glitzy shopping malls and condominiums distributed by the development firm, Eang Vuthy, executive director of local rights group Equitable Cambodia, says that there are no plans to build at the site.

“People are still going into the street and protesting this issue,” Vuthy adds. “With the situation like this, even if they did want to develop the site, no one would be willing to make a big investment in the area.”

Evictions, however, can sometimes be justified. As a rapidly growing city, Phnom Penh is finding that it needs to expand its roads, railways and airport. Groups like Equitable Cambodia are now trying to act as intermediaries between local developers, international donors and the Cambodian government to ensure that communities living in such areas receive fair compensation. It remains to be seen if such efforts will be successful.

By targeting the city’s urban poor, and by failing to provide them with adequate compensation for their land, authorities and business tycoons are essentially further impoverishing the most vulnerable segment of Cambodian society while enriching themselves. In a country with no real social services, moreover, local and international NGOs are left to pick up the pieces.

“We’re monitoring at least 700 families from Boeung Kak,” Vuthy says. “Many of the people who accepted land at resettlement areas are now coming back to the city because they can’t find jobs, and because there’s not enough infrastructure and public services where they live. Some have become poorer, and some are now even homeless… The government doesn’t have the capacity, the resources, or political will to help such people.”

According to Virak, evictions will continue. He does, however, believe that a growing wave of popular dissent in the country means that the worst of them are now over. To ease such tensions, the Cambodian government is also now issuing land titles across Phnom Penh.

“The people who aren’t getting titles now are afraid that they’ll be next,” Virak says. “But even amongst those who have land titles, few believe that their tenureship is secure. Most people are sitting and waiting and fearing the worst. Because of that, people don’t make long-term investments in their homes, and that’s now how you build a vibrant city.”