The Case for DIY Rides As Good for Cabbies – Next City

The Case for DIY Rides As Good for Cabbies 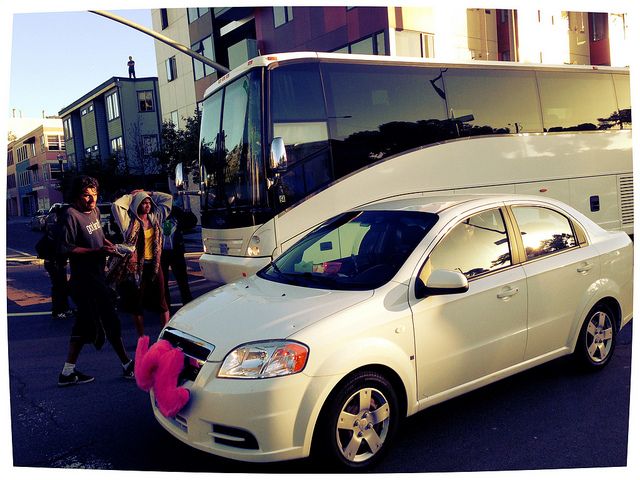 Last night in Seattle’s Capitol Hill neighborhood, the ride sharing company Lyft held its second-ever “Support the ‘Stache” community meeting, the first coming in Los Angeles in July. (The event’s name is a reference to the gargantuan fuchsia mustaches affixed to the front of Lyft cars.) Held in a gallery space, the event brought together Lyft drivers and passengers in celebration of how, per the invitation, “peer-to-peer transportation makes Seattle safer, more affordable, and more connected.”

There was a political reason for last night’s storytelling session, too. Lyft works by pairing, via an app, everyday drivers with riders eager to hitch along, with passengers encouraged to give a donation in exchange for the service. Next Tuesday, the Seattle City Council is set to hear the results of a field study it has been conducting since June on people’s experiences taking non-traditional for-hire car services like Lyft, Sidecar and UberX.

The council isn’t expected to pass any regulations on the industry until Phase Two of the study, which will consider how regulation would affect stakeholders. But the moment is ripe for Lyft to attempt to define how the public feels about what it is doing to Seattle’s transportation landscape.

That’s what makes comments captured by GeekWire’s Taylor Soper so interesting. Lyft is pitching itself as a social enhancement; one participant quoted in the company’s glossy YouTube highlight reel from the Los Angeles event talks about how hitching rides makes “cities feel smaller.”

But Soper also gets co-founder John Zimmer talking about the company’s pitch on why Lyft isn’t such a bad thing for the taxi services that are vocally opposed to ride share:

‘This is not a zero-sum game where having this new service is bad for the old service,’ he told GeekWire. ‘Having all of these services makes it easier for you to not need a car. Then, if you don’t have a car, you will use all of these services even more… All of us need to adapt and I think as long as we’re all being respectful of each other, competition can be a good thing and new industries can be a good thing.’

It’s a complicated argument for Zimmer to make. Certainly, Silicon Valley loves talk of “nonzero,” and the argument that competition can be win-win all around. But here it meets an industry that is seeing Lyft — slogan: “Your friend with a car” — less as an up-with-people social movement than a ready-made tech world giant that doesn’t care about crushing incumbents.

Lyft just celebrated a million rides and is now in 10 cities. It prompted a city council study just a month after it launch in Seattle. Cab industry interests point out that these “start-ups” are well funded. Lyft has more than $80 million in venture capital money, and Uber was valued after its latest round of funding at $3.5 million.

The D.C. taxi commission recently shared the testimony from one a local driver during that city’s own ride share debate. “When [Uber CEO Travis] Kalanick comes to town with $58 million of Wall Street money in his back pocket,” it complains, “he can command a lot of attention.”

So that’s the landscape in which Zimmer is making his “good for drivers” argument. Even the fact that driving is going down, especially among younger people, is a mixed bag. On the one hand, it suggests that people are indeed getting more comfortable with shared modes of transportation. But the Lyfts and Sidecars and UberXs of the world are so new, and so limited in scope, that it’s easy to argue that personal car ownership would be sloping downwards anyway.

The other notion floating around in transportation circles is that ultimately, ride share will be good for taxicabs because it will force them to make necessary changes they’ve resisted, like putting credit card readers in all vehicles or adopting e-hail. Even if few individual drivers want to make those changes, being forced to across the board by the competition might be a good thing in the end for everyone.

That’s the pitch, at least. Companies like Lyft are trying to negotiate whether to make the taxicab industry their ally or enemy, and are doing a little of both. It’s easiest if they can get drivers on their side, and that’s why we see framings like Zimmer’s in Seattle last night. That doesn’t mean they won’t aggressively go after cabbies should it come to that. But we’re still in that window where it makes sense for a company like Lyft to try to be everyone’s friend.