The Cars May Not Need the Parking, But All Those Other Vehicles Do – Next City

The Cars May Not Need the Parking, But All Those Other Vehicles Do 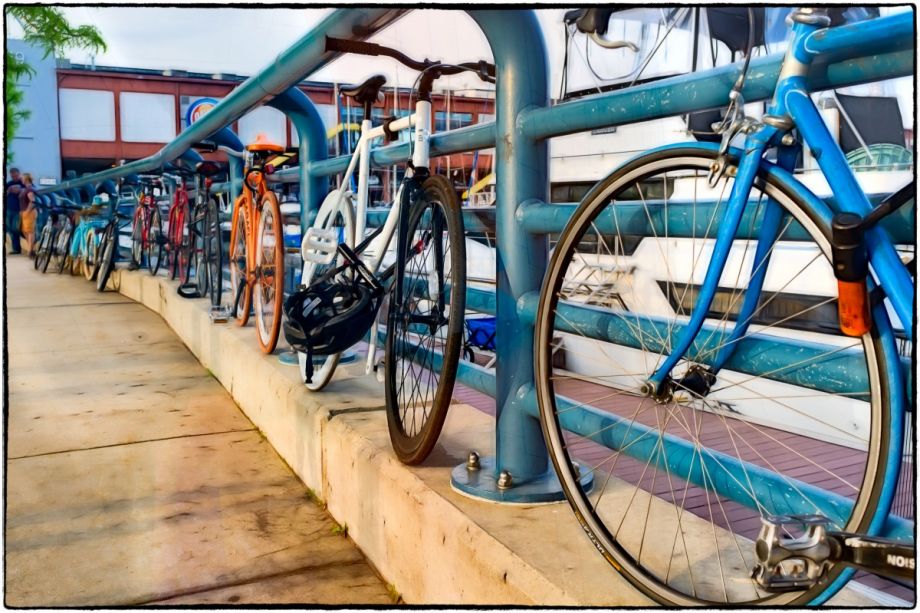 Welcome to “The Mobile City,” our weekly roundup of new and newsworthy transportation projects worldwide.

“Micromobility” is catching on with American urbanites. A report released by the North American Bike Share Association (NABSA) last month found that shared bikes and scooters provided 157 million trips on 194,000 vehicles in 2019, figures that should rise significantly when NABSA gets around to assessing the state of the industry in 2020 sometime next summer. Add to that the as-yet-unmeasured number of trips taken on privately owned micromobility vehicles and the impact on cities becomes becomes even greater. Bikes, e-bikes, scooters and e-scooters offer a low-carbon, high-efficiency, healthier-for-the-user alternative to travel by car, and in dense urban environments, they have the added advantage of taking up very little space on the streets. But the question of where to put them when they’re not in use is also becoming more important. Transportation advocates are warning that without more parking for bikes and scooters, the growth of micromobility could stall, and in New York, the advocates have even quantified the lost potential.

We don’t know what role micromobility will play in the evolution of National Landing, but it looks like macromobility will be key to the area’s future growth. What’s National Landing? It’s the name Northern Virginia economic development officials coined for the areas formerly known as Crystal City, Pentagon City and Potomac Yard, including Ronald Reagan Washington National Airport. About two years from now, Amazon HQ2 should open in Crystal City, while at the other end of the district, a new million-square-foot Virginia Tech graduate campus will serve as the anchor of a commercial development at Potomac Yard. The National Landing BID just released a progress report on the eight transportation projects designed to turn the 1970s edge city into an actual downtown, including a bridge that will make National Airport the first major airport in the country you can walk to from nearby residences.

National Landing’s transportation projects were all included in a 2018 agreement between Arlington County, the City of Alexandria and the Commonwealth of Virginia aimed at getting the area ready to receive Amazon. That many of them will be completed within four years testifies to the speed with which the projects passed through the review phase. There was a time when many more projects got built in such short time, and critics of the federal environmental review and alternatives analysis process point to the reviews as a major contributor to the higher cost of infrastructure construction in the U.S. compared to Europe. Starting next year, two states will be able to bypass the federal reviews under a pilot program Congress approved in 2015.

Last week, this column reported on a column that recommended that communities reduce mandatory parking minimums in order to reduce the cost of housing (“The Mobile City,” Dec. 30).

This week brings with it two articles that argue that communities need to build more parking to cope with the growth of micromobility. The good news here: It won’t take all that much land to provide it.

In an essay in Smart Cities Dive, two micromobility executives — Shabazz Stuart, co-founder and CEO of Oonee, a builder of bike parking facilities, and Carl Vernersson, chief financial officer at shared-scooter operator Voi Technologies — argue that lack of sufficient parking for scooters and bikes could choke off the rapid rise in micromobility use.

“The lack of secure parking is a significant barrier preventing people from purchasing or using their own micromobility vehicles, especially in dense cities where few residents have access to a garage or other safe storage,” they wrote. “This infrastructure shortcoming has a disproportionate impact on lower-income communities: up to half of all bicycle commuters in the U.S. come from households making less than $25,000 a year — meaning a decent e-bike could exceed a month’s take-home pay.”

Stuart and Vernersson offer several possible solutions to the problem. One is following the lead of cities that turned curbside parking spaces into outdoor dining rooms during the COVID pandemic and setting aside on-street spaces for bike and scooter parking. Scooter-sharing companies are already experimenting with having riders lock their scooters to a bike rack or pole at the end of their trips and using electronic geofencing to designate spaces where scooters may be stored and ridden.

Bike theft is also a problem in New York City, according to a report by Transportation Alternatives. A Streetsblog NYC report on the study also cites a New York TImes report stating that the lack of adequate secure bike parking during a boom in bike use has led to a 27 percent increase in bike theft. The report notes that where the city has 1.5 parking spaces for every car registered in the city, it has only one parking space for every 116 estimated bicycles.

The report also faults the administration of Mayor Bill di Blasio for failing to meet even its own modest goals for adding bike racks and corrals to city streets. The 1,500-rack-per-year goal is below the goals set by his predecessors.

The lack of parking, the report says, contributes to a vicious cycle: as 95 percent of cyclists say bike parking is important to them, the lack of same depresses bicycle use below what it otherwise would be. And the report also notes that the depressing effect is greater among low-income riders and riders of color.

And it also hurts local businesses: while the study found that drivers spend more than bike riders in local stores, when one factors in the greater number of bikes that can fit into a single car parking space, a parking space filled with bikes produces more retail revenue than the single car does.

The report recommends several strategies for fixing this problem and increasing bike use, including rapidly expanding bike infrastructure in low-income, Black and Hispanic neighborhoods. Another of the strategies: forging partnerships with private companies like Oonee to build more bike parking facilities.

Amazon is Coming to Northern Virginia, and the Locals are Creating a Downtown to Welcome It

Right now, very few Washingtonians refer to Crystal City as a “downtown.” Chances are that if they use that term to refer to any place in Northern Virginia, they slap the label on Rosslyn, the mid-rise clump of office towers across the Potomac from Georgetown.

The effort starts with a few built-in advantages. Two of the three communities that together make up National Landing — Crystal City and Pentagon City — already consist of mid-rise and taller office and apartment buildings, and the planned development at Potomac Yard will be similarly walkable. But there are some connections that could be improved, and the projects described in the “Mobility Next” report aim to improve those connections.

A total of nine transit, road and pedestrian projects are included in the package. On the transit front, a new entrance to Crystal City Metro station will connect it directly to Crystal Drive, the neighborhood’s main shopping street. The existing Transitway high-capacity busway, which connects Potomac Yard and Crystal City, will be extended further north to Pentagon City. A new Metro station at Potomac Yard will serve Virginia Tech University’s planned million-square-foot “innovation campus” combining educational facilities, offices and student housing. A new Virginia Railway Express station will also serve Crystal City, and a second Long Bridge next to the existing one across the Potomac will allow for more frequent regional rail service as well as open up the possibility of through-running Maryland and Virginia regional rail trains. This in turn would increase the number of Greater Washington residents who would live within an hour’s commute of Crystal City.

On the road front, Army-Navy Drive will be rebuilt as a “complete street” and U.S. Route 1, which runs through the area as a quasi-freeway, will be transformed into a pedestrian- and bike-friendly boulevard. Already completed is a project that converted Potomac Avenue into a protected bike route between Crystal Drive and Four Mile Run, and smaller projects will add 5.5 miles of bike and scooter lanes to the 8.5 already in place.

Pedestrians will see upgraded and beautified sidewalks, and in what may be the most novel of the projects, a bridge called the “CC2DCA Intermodal Connector” will span the one-third mile from Crystal Drive to Reagan National Airport, passing the VRE station along the way. This would make it possible for Crystal City residents to walk to National Airport to catch their flights; this columnist is not aware of any other major U.S. airport with walk-up access.

Alll of the mass transit projects save the second Long Bridge will be completed between 2022 and 2024. The Army-Navy Drive reconfiguration will also be completed in 2024. The Route 1 and pedestrian bridge projects should open in 2028, followed by the second Long Bridge two years after that. Total cost of the projects: $4 billion, Arlington County, the Commonwealth of Virginia and the Northern Virginia Transportation Authority are picking up much of the tab; other funders include Amtrak, the U.S. Department of Transportation, the City of Alexandria and private developers working on construction projects that will benefit from the improved connectivity. The one project whose funding has yet to be nailed down is the Route 1 transformation.

Progressive Railroading reports that a pilot project approved as part of the last major infrastructure bill passed by Congress will finally become reality this year.

According to the report, the Federal Railroad Admininstration, Federal Transit Administration and Federal Highway Administration will issue a final rule effective Jan. 27 that sets up the ground rules for a program that will let up to two states use only state environmental laws in reviewing infrastructure projects, bypassing the National Environmental Policy Act’s requirements.

The rule is designed to speed up the review process for certain infrastructure projects, which some critics of regulation say add cost as well as time to the projects. Not all projects will be eligible for the bypass, and the final rule explains what types of projects would qualify. Congress authorized the pilot project as part of the Fixing America’s Surface Transportation (FAST) Act, passed in 2015.

Know of a project that should be featured in this column? Send a Tweet with links to @MarketStEl using the hashtag #mobilecity.