The Canadian Company Drowning in Phnom Penh’s Garbage – Next City 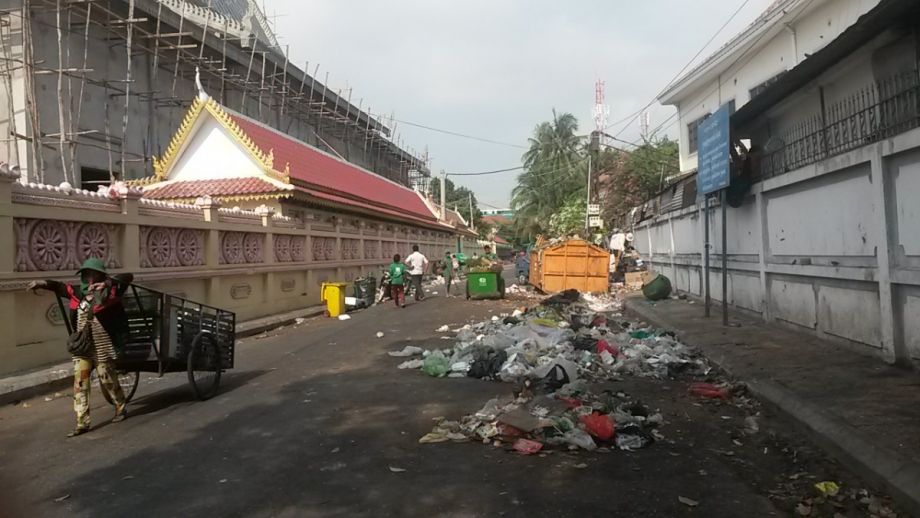 The amount of garbage in Phnom Penh is said to have nearly doubled since 2002. Photo credit: Daniel Otis

The pile of trash is only getting bigger. Torn plastic bags, broken styrofoam containers and scraps of rotting food roast in the tropical sun; the smell of the fly-swarmed mess is nauseating. Residents shake their heads: this should have been picked up yesterday. Then, one night, a battered green garbage truck with the word “CINTRI” painted on the side finally chugs its way down the street, trailed by swarm of shirtless young men in flip-flops who shovel rubbish into the back.

In 2002, CINTRI, a branch of Canadian firm Cintec Environment Inc., was granted an exclusive 50-year contract to collect commercial and residential waste in Phnom Penh and keep the city’s main streets clean. The exact details of the company’s agreement with city hall have never been made public, but since the deal was inked, Phnom Penh’s population has swelled from just over one million to two million people. The population boom and its attendant urban sprawl seem to have caught CINTRI off-guard.

“The company is not making money,” CINTRI president Hor Kimsay told the The Phnom Penh Post in February. “About 20 per cent of all people who should pay [for trash collection] never pay.”

The company’s failure to collect payment from city residents has led to crazy fee irregularities as CINTRI is forced to offer large discounts to people who refuse to pay for trash collection. Adding to the company’s woes, earlier this year, most of CINTRI’s 1,400 workers went on strike to demand higher wages. The chaos has raised the ire of Phnom Penh governor Pa Socheatvong, who has threatened to cancel the contract unless CINTRI cleans up its act. Taking a somewhat more conciliatory tone, last week Phnom Penh’s deputy governor announced that the city is looking for a second waste collection company to pick up the slack.

The trash filling Phnom Penh’s streets is more than just an eyesore. It’s blocking storm drains, which has increased flooding. (Plastic bags are the main culprit – the days of food coming wrapped in banana leaves are largely over.) According to Sonny Krishnan, a communications officer at the World Health Organization’s Phnom Penh office, the strewn garbage also poses serious public health concerns. Mosquitoes that carry the dengue virus, for example, easily breed in tin cans and styrofoam containers that have collected rainwater. Krishnan also expresses concern about diseases that can be contracted and transmitted by flies, rats and household pets that rummage through the mounds.

While CINTRI admits that there are problems with its operation, it has yet to offer much in terms of solutions. The company recently installed new trash bins in the city’s major parks to combat litter, but adding more street sweepers and garbage trucks to its team seems to be out of the question. In the interview with The Phnom Penh Post, Kimsay claimed that since 2002, the amount of daily rubbish to be cleared has risen from 800 to 1,400 metric tons – a difficult surge to keep up with. “Everything is still not acceptable in terms of cleaning the city,” Kimsay said. Neither CINTRI nor CINTEC responded to requests to comment for this story.

“Over the past couple years, there’s been a lot of back and forth between CINTRI and city hall about who’s not doing their job,” says Jon Morales, a program manager at The Asia Foundation. “But there hasn’t been a lot of people taking an objective look at the entire system and seeing what can be done to improve it.”

Taking on this role, the foundation recently launched a project to track 14 CINTRI garbage trucks with GPS and GIS software. According to Morales, the data gleaned from the Australia-funded initiative will serve to build relations between CINTRI and city hall while providing hard data about problem areas so that proper responses can be formulated. Financially speaking, Morales adds, the industry is currently “a net negative all the way through.” To make it profitable, he believes that the city needs to invest in a recovery facility to extract value from the sector – a niche currently filled by scores of informal waste pickers who often add to the city’s trash problem by tearing open garbage bags on the street as they search for recyclables.

“Waste management is a burgeoning crisis, and as Phnom Penh grows, it’s going to become a much bigger problem if nothing continues to be done,” says Morales. Cambodia’s prevalent littering culture, moreover, is also a major obstacle. “Changing social mores is very difficult. It can take a generation to bake that in.”

A group of young Cambodians, however, is literally taking matters into their own hands. On a Friday morning in April, I met up with a team of more than thirty high school and university students in a park that fronts Phnom Penh’s splendid Royal Palace. Decked out in matching T-shirts and caps, and carrying garbage bags and long metal tongs, the students set out to rid the popular picnic area of trash. The group, which calls itself Urban Voice, has also crowd-sourced map data on areas affected by piles of garbage. The map – which you can see here – has been made public in the hopes that CINTRI and city officials will address the growing problem.

“Phnom Penh calls itself ‘the Charming City,’ but if it’s full of trash, how can we say that it’s charming?” Urban Voice activist Ravy Phom said at the event. “We’re trying to set an example.”