The Bumpy Road for Modular Construction in NYC – Next City

The Bumpy Road for Modular Construction in NYC 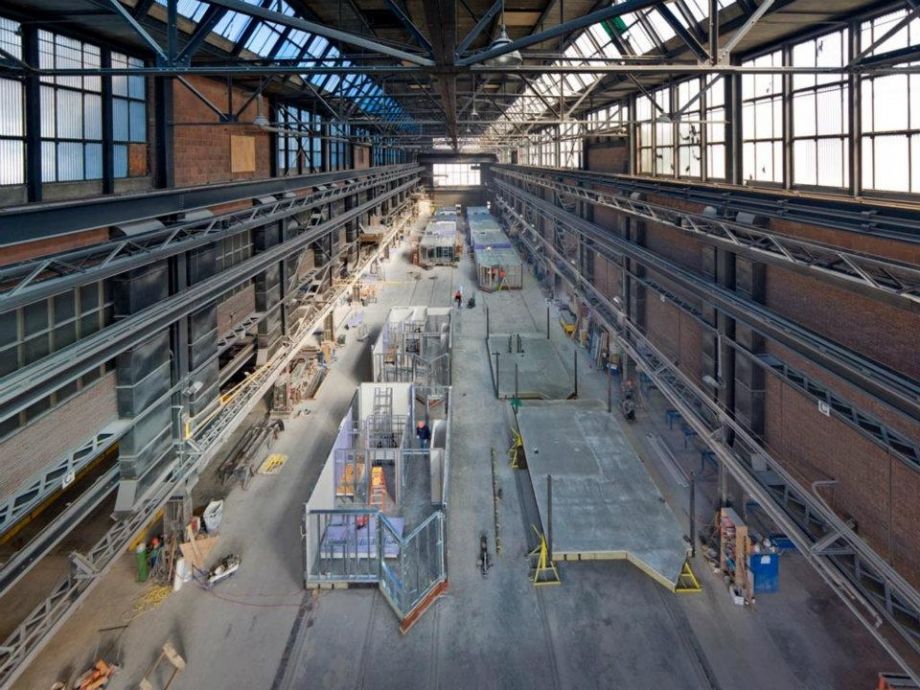 Several years ago, in Brooklyn, a vacant, boarded-up building was replaced with affordable housing in a mere 12 days. The site owners, the nonprofit Concern for Independent Living, chose to build the structure using modular construction, in which 84 housing modules were constructed off-site, then stacked six stories tall with a large hydraulic crane.​

Getting to that point, unfortunately, didn’t go smoothly. The modules were ready to be “stacked” about four months before the site was ready to hold them, according to Ralph Fasano, executive director of Concern for Independent Living. The nonprofit stuck with 84 modules, “all ready to go, with nowhere to put them,” Fasano says.

The cost of finding storage for the modules, plus security, eliminated the cost savings the nonprofit anticipated from using modular construction. The delay also diminished hopes for a quick construction timeline, despite the fast pace of stacking.

When the building opened in 2012 after the lightning-fast stacking process, it held 65 studio apartments rented to low-income individuals recovering from mental illness. It marked the first single-site supportive housing program in New York State to utilize modular building techniques.

“At the beginning of [Mayor Bill de Blasio’s] administration, we set really ambitious goals for housing production,” says Leila Bozorg, the affordable housing agency’s deputy commissioner of neighborhood strategies. Now, she says, the administration hopes to finance over 25,000 affordable homes every year — “in an environment of rising land costs and rising construction costs.”

Modular construction requires the involvement of several city agencies, from the Department of Buildings approving permits to the Department of Transportation allowing modules to be transported on city streets before they’re stacked.

The active engagement of city government is crucial to get modular off the ground, says Roger Krulak, CEO of FullStack Modular, New York City’s only modular manufacturer.

Krulak points to London, where last year Mayor Sadiq Khan announced the city would spend $32 million on at least 1,059 compactly-sized, affordably-priced modular apartments by 2021. In Singapore, Krulak adds, the city-state requires developments on government land to use modular construction techniques.

“When modular is pushed at the government level,” Krulak says, “You see people jumping into the business.”

Given New York City’s bumpy experience so far in modular production and construction, the NYC Department of Housing Preservation and Development is looking outside the city to kickstart its own path. “It’s going to be important for us look broadly, given that there’s only one [modular manufacturer] in New York right now,” says Bozorg. “We hope that in time, that will change.”

In 2015, the city’s main modular housing manufacturer, Capsys Corp., closed up shop at the Brooklyn Navy Yard. The company was ultimately acquired by Whitley Manufacturing and now manufactures out of Pennsylvania.

There’s been at least some success with modular single-family housing development through Build it Back, the city program to rebuild housing damaged by Hurricane Sandy. 100 homes are now being rebuilt through modular construction in Staten Island and Queens, according to a program spokesperson.

“After a thorough review of the technology involved with modular construction, we felt the homes produced would meet our program’s structural and architectural requirements,” says Lou Mendes, chief operating officer with the Mayor’s Office of Housing Recovery Operations. “Modular construction has advanced significantly and proven to be more logistically efficient which provides a more precise schedule for our recovery program.”

At the NYC Department of Housing Preservation and Development, however, the agency will focus on multi-family development and specific sites that can accommodate modular construction — for example, sites need extra space to facilitate “staging” of the modules before they’re stacked.

“We’re seeking sites the city has jurisdiction over, in appropriate neighborhoods in terms of a medium-density project, and with the site conditions necessary to help with staging issues,” Bozorg says. The “sweet spot” for the agency, Bozorg believes, are modular projects between eight and ten stories high.

The renewed push for modular construction comes at a time many city agencies are creatively responding to the mayor’s push for affordable housing.

The NYC Public Design Commission plans to include modular development in that agency’s next round of example projects for its affordable housing design guide, says Justin Garrett Moore, executive director of the NYC Public Design Commission. In May the agency presented its first case study of seven projects that demonstrate excellence of design in affordable housing.

“We really want to include modular… because it’s a leading, open question for what quality design for this construction type looks like,” says Moore. “We’ve set broad objectives for what makes a good housing project. We want to understand how modular construction can fit into that.”