The Battle Over Sidewalk Cafés – Next City

The Battle Over Sidewalk Cafés 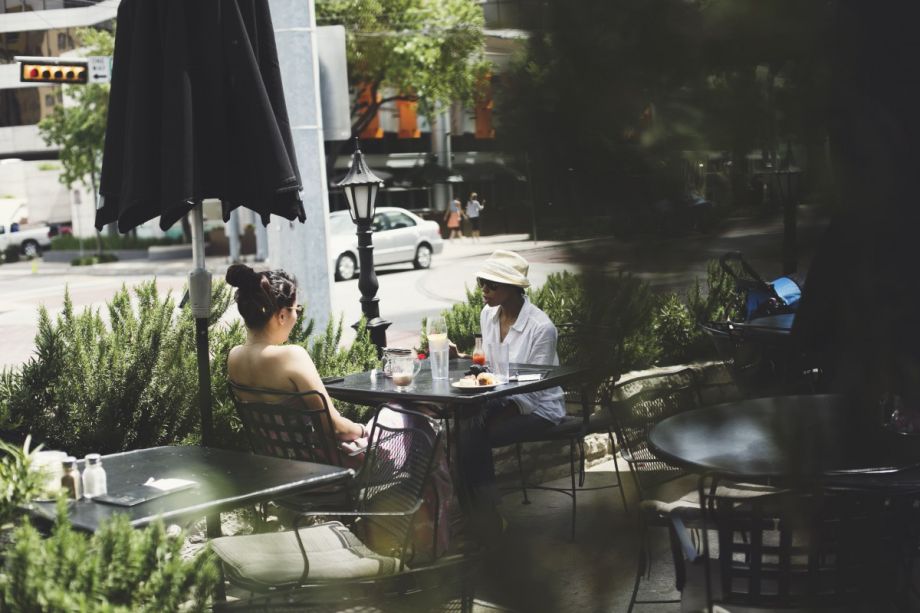 It’s that time of year again, when city dwellers willingly wait in line to pay $12 for eggs at a sidewalk café. And unless you live in Anchorage or the Upper Midwest, your favorite watering hole probably has tables and chairs out front ready for dining al fresco. But if you’re an urban restaurateur or barhand, you can’t simply throw some chairs on the sidewalk. Like most city issues, there’s one thing standing in your way: Red tape.

And in Dallas, chief city planner David Cossum wants the city to change its byzantine laws regarding sidewalk café regulation. Which got us wondering: How do European-style sidewalk cafés play into a city’s public space?

“Streets can, and should, be some of the most important public spaces in the city,” Ethan Kent, senior vice president at the Project for Public Spaces, told me. “There are examples of great streets that are almost all café seating that have almost barely any space to walk on them, like Stone Street in lower Manhattan. And cities need a full hierarchy of streets, but we also need streets that are destinations.”

In Dallas, Cossum’s proposal asks City Council to lower prohibitively high fees for sidewalk café permits from $1,000 — in addition to the $750 application fee — to a one-time “streetscape license fee” of $250. The streetscape license would be for everything from dive bars to retail shops. Revenues from the licenses would drop from $315,000 annually to an estimated $212,000, according to the Dallas Observer. But, as the Observer notes, that could be made up in additional sales and property tax revenue by a more robust and lively streetscape.

Now, permits for this type of thing are not uncommon. And this shouldn’t be unregulated. You can’t simply have every storefront in town setting up shop on the sidewalk. From Boston to D.C. to New York, every major city has a permit process for cafés. But Dallas’ stringent regulations and sky-high prices make it tough for businesses to justify the cost. And it’s not just the fees. In Dallas, the application is more daunting than applying for a mortgage. You need written agreements from adjacent property owners, a scale drawing of the patio space and — get this — a seating layout.

Some argue that the city’s laws are impeding urban growth. “It’s anti-urban — and I also think it’s anti-free market — to charge all these fees,” Councilman Scott Griggs said.

“The situation in Dallas is indicative of how we approach our public space and regulation, by not asking how can we best serve the public,” Kent continued. “The thing is, everyplace where they have tried [sidewalk cafés], they’ve pretty much succeeded.”

Kent said that while regulations are necessary — we don’t want or need every sidewalk to be bustling — they can also come about in a much more organic and neighborhood-focused manner.

“One thing we often recommend is creating sort of a temporary bureaucracy-free zone, where you really work with the people on the street to say, ‘What would work?’” he said. “You have a trial period. And then you decide what regulations do we actually need to support this.”

This is, in some small way, what Cossum proposed in Dallas: A two-year pilot program of lower fees and less paperwork. City Council has already asked for a more streamlined proposal and there seems to be support for his pilot program.

Kent didn’t mince words when he summed up the situation in Dallas. “Streets aren’t just corridors for mobility,” he said. “The best streets in the world are about friction, where you accomplish many things in one place. Cities like Dallas have degraded the many destinations that are meant to bring people together and now forced them to drive to 10 places rather than be able to do 10 things in one place.”

Share your stories or nightmares of sidewalk cafés in your city in the comments.