The Battle Over San Francisco’s Bus Stops – Next City 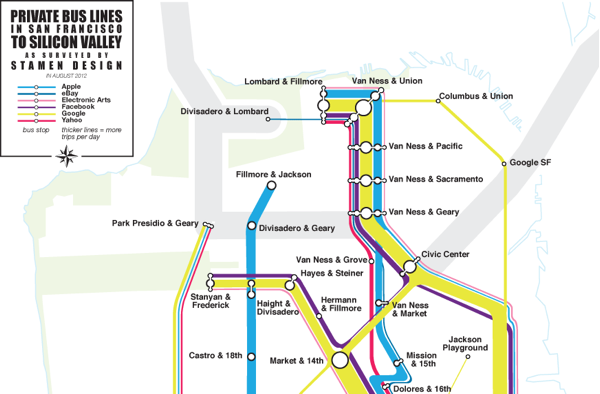 Stamen Design hand-crafted a map of San Francisco’s private buses by, among other things, sitting on street corners and hiring bike messengers to track the shuttles. Credit: Stamen Design

A protest over Google buses, a catch-all term for the private shuttles operated by dozens of tech and other companies in the Bay Area, took place in San Francisco’s Mission District on Monday. Protestors held one bus captive for about half an hour, and while the supposed Google employee yelling things like “This is a city for the right people who can afford it!” was fake — he turned out to be a labor organizer — the tensions are very real.

San Francisco has become a very expensive place, one challenging to live in comfortably without some degree of wealth. Those who make their livings in the tech world are coming to stand in for “a city for the right people,” and not in a good way. Private shuttles, which do something of a reverse commute each day from San Francisco to Silicon Valley, have also become a symbol of economic stratification. And it’s not like locals never see them: One estimate found that Google alone does at least 150 daily runs.

That makes Monday’s protest about more than a bus. A housing group called Eviction Free San Francisco, which organized the protest, describes its mission as “help[ing] stop the wave of speculator evictions that have been hitting San Francisco by holding accountable, and confronting, real estate speculators that have been displacing long time San Francisco residents for profit.” The group has drawn particular attention to evictions taking place under the Ellis Act, a California law that, some argue, creates a loophole that landlords use to boot longtime tenants and raise rents. Across the board, as San Francisco becomes an immensely desirable place to live, the demand for housing is outstripping the city’s supply.

Amid all that, Googlers have become a proxy for the conclusion that San Francisco today serves only the wealthy. One organizer, Erin McElroy, explained that recent economic trends are “creating a system where San Francisco is being flooded with capital, and creating a technology class where other people can’t compete.” In fact, “techie” is now term to run away from, and with good reason. Take this recent comment on Streetsblogs SF: “Techies should congregate with other techies, like termites in a big nest.” Others, meanwhile, have argued that the fury toward the Google buses is misguided. Wrote Streetsblog’s Aaron Bialick this week, “The real culprits are the decades-long failures of SF and other Bay Area cities to develop efficient transit systems and the kind of walkable neighborhoods that are in ever higher demand, yet in scarce supply in the region.”

Even to those who see an upside to San Francisco’s tech boom, the Google buses can be viscerally irksome. There is, no doubt, the sense among some that the buses are air-conditioned, WiFi-enabled chambers of privilege that allow the wealthy to float above the city’s considerable challenges. More practically, they block traffic. They occupy space at public bus stops. One column in the University of California at Berkeley’s alumni magazine used double-parking to brand bus riders as “the villainous 1 percent.” They are the day-in, day-out sign that Google et al are, in a very concrete way, making the rules. “We certainly don’t want to cause any inconvenience to SF residents,” Google said in a statement. But it didn’t deny that inconveniences are there.

And so, while the Google Bus protests are indeed about San Francisco’s social woes, they’re also a bit about actual bus stops.

Which is why it’s particularly interesting that San Francisco, in cooperation with Google and other private shuttle operators, is somewhat belatedly getting into the game and making public policy choices. The SFMTA (San Francisco Municipal Transportation agency) is crafting a pilot program on private shuttles expected to launch in the coming months. “The number of privately operated shuttles in San Francisco has grown exponentially in recent years, and rapid growth is expected to continue,” the agency has explained. “Shuttles support important citywide and regional goals by decreasing drive-alone trips. Shuttles also present challenges for safe and efficient operation of Muni vehicles since they frequently use Muni stops for loading and unloading.”

It’s called the “Shuttle Partners Program.” In draft form, the proposal aims to tackle the most major challenges associated with Google Buses.

On the table, for example, is having what SFMTA calls “shared Muni zones” for use by both public buses and private shuttles. Google and other providers would pay a fee for their use. That’s potentially politically sensitive, as it might require doing away with street parking. The city has also considered developing an “enforcement approach,” seemingly an admission that its strategy thus far has been to not do much of anything.

More fundamentally, the push here is to bring Google Buses into the light. An air of mystery has surrounded them, which has only contributed to the sense that they’re especially sinister. The design firm Stamen, itself based in the Mission, set out in recent years to map the Google Buses: “They’re ubiquitous in San Francisco, but the scale and shape of the network is invisible.” It tracked their routes by standing on street corners and hiring bike messengers to send after them. The whole thing has the air of mapping Black Ops safehouses.

Under the plan, the private shuttle buses could be identified with “visible placards” that would spell out to which company they belong. More than that, the proposal calls for “data sharing” between private shuttle bus operators and the city. That data helps policymakers understand whether these private transportation options are doing what they say they’re doing to serve underserved populations. In Washington, D.C., data has been central to the battle over the car service Uber. The company has refused to hand over trip data that city regulators have demanded, leaving the city to argue that it can’t properly oversee these new kinds of quasi-public transportation options without it.

Better private bus stops won’t eliminate the tensions bubbling up in San Francisco. There are too many outstanding questions about housing, public transportation and economic disparities for that. But it’s possible that they’d help focus attention on what’s really challenging the city rather than what’s simply really annoying.