The Attack of the Gerry-mander – Next City

The Attack of the Gerry-mander 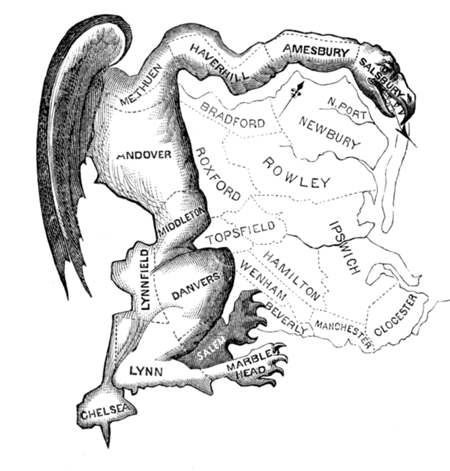 The dreaded Gerry-mander! The Boston-Gazette

If the Tea Party feeds off one feeling well, it’s the common American sentiment that no one in Washington represents them. Well, if the Tea Party is patently suburban, what does that mean for cities? Are they overrepresented? This would seem to be an odd takeaway. Let’s examine the issue, in light of the recent Census.

Michael Lind wrote an excellent essay recently at Salon, about how no one really represents the American people in Washington anymore. His argument, to keep it very brief, takes the thesis of Robert Putnam’s Bowling Alone — which explains how television ruined American civic life — and uses it to explain how and why Washington does not have to listen to its constituents anymore. Lind argues that with the decline of labor unions and civic organizations, the Democratic and Republican parties have simultaneously relied less and less on these groups’ interests, instead going straight to those with money higher up the food chain. The parties are federations with local chapters in name only. This is perhaps Lind at his most depressing:


In this new institutional environment, it is only natural that more and more elected officials should pay attention to the rich few who pay for their campaigns and for the advocacy groups that present them with proposals and platforms. Campaigning for office becomes an exercise in telling ordinary voters of the left, right or center what they want to hear and then ignoring them until the next campaign.

This came right before the results of the 2010 Census, which Yonah Freemark reported on here earlier this week. The older states in the Northeast and Midwest are shedding residents to the Sunbelt, still. As Yonah points out, that means that Congress will skew even more suburban in character and interests. Assuming, of course, that politicians in Washington represent their constituencies at all.

This will, of course, mean redistricting for those states that have picked up or lost seats, and the gerrymandering of districts to try to keep certain seats in the possession of certain parties. This leads to hilariously-shaped districts like Illinois’ 4th, shaped like ‘earmuffs’ around I-290, or Illinois’ 17th, shaped like a ‘rabbit on a skateboard’. Stephen Colbert and other commentators have made a bit of a parlor game out of giving names to the shapes that gerrymandering produces. It’s funny, but the humor lies in forgetting that the term gerrymandering comes from this very parlor game; it is a portmanteau of Gerry and salamander. The Boston Gazette coined it to mock Governor Elbridge Gerry’s self-serving redistricting the Boston area, which led to one district shaped like a salamander. That was in 1812.

There is a another, more important, historical irony to all of this, too, when we consider why we have a bicameral legislature. The lower house is supposed to keep in check the more aristocratic Senate — our analog to the House of Lords. But now, our lower house has created all sorts of amorphous demographic fiefdoms, balkanizing their home states to ensure that they do not have to respond to the will of those in their home districts. Or, rather, changing their home districts so they need not respond to anyone’s will (other than their benefactors, of course). While the Senate might commit all sorts of metaphysical crimes, to their credit, they leave geography alone.

My home state of California is finally poised to do something about this. The LA Times reported recently about the state turning over the redistricting job to a council of citizens, instead of lawmakers. Get this, “[the] new rules emphasize compactness, contiguity and the need to keep counties, cities, neighborhoods and other communities of interest together.” Imagine that.

And bringing this back to Yonah’s concerns about cities having proper representation in Congress, it seems that this California citizen-led redistricting could potentially be a good thing for better urban representation. Take a look at California’s 12th, for example. It contains the Southwestern portion of the City of San Francisco — primarily the Sunset district — and goes all the way down the Peninsula to San Mateo. Now it’s not as if San Francisco’s Sunset district is a liberal hotbed — it’s considerably more conservative than the rest of the city — nor is the Peninsula particularly conservative, but the two communities interests don’t always line up. Consider the lawsuit certain Peninsula communities (which, I have to acknowledge here, are located in the 14th) are filing against the California High Speed Rail Authority. There are ways in which redistricting could help urban areas better represent their own urban interests in Washington, should they be represented separately from their suburban counterparts.

San Diego is another great example. Clairemont-Mesa, a working-class white neighborhood, is separated from the urban San Diego district (the 53rd), and is instead lumped in with the more conservative North County area. The 53rd, for its part, takes UC San Diego from North County, along with a narrow band of coastline from Mission Beach and Pacific Beach to connect the whole thing. Southeast San Diego, which is primarily Latino, Philipino and Black, votes in the 51st, which also contains all of Imperial county — a lengthy drive East of the city. The two are connected by a thin band of the US-Mexico border. San Diego has been carved up and sold off to its hinterlands, or vice versa. Either way, San Diego has no direct representation in Congress except for the 53rd.

I’m not sure I’ve totally convinced myself. But I’ll put it to you. Do you think proper redistricting could make for better or worse representation of cites in Washington?