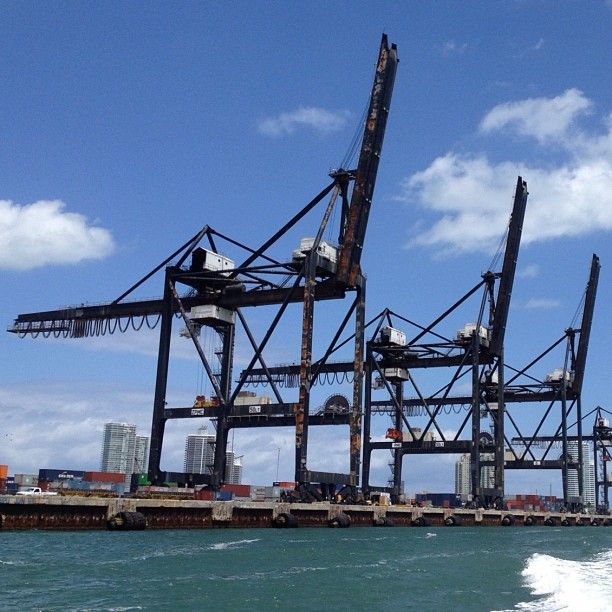 This week, we’re all about ports. In conjunction with Ryan Briggs’ Forefront story on an expansion project at the Port of Philadelphia, Emma Fried-Cassorla delivers a five-part series on various issues facing port cities around the country. We will roll out one installment each day this week. This is the first.

There is an arms race of sorts happening along the Atlantic coast. After the expansion of the Panama Canal is completed (current target: 2015), supertankers and “post-Panamax” ships will fit through it for the first time, thereby reorganizing shipping routes. Port cities — New York, Baltimore, Philadelphia, Savannah, Charleston and Miami — are all competing to deepen their harbors to accommodate the 50-foot draft of these huge ships.

The next phase of PortMiami’s “Deep Dredge” began last week with the solicitation of dredging bids by the U.S. Army Corps of Engineers. Set to begin in early 2013 and end in 2015, the project will deepen the shipping channel from its 42 to 50 feet. This is only one part of a $2 billion expansion plan, which will also include dockside improvements, an on-dock intermodal rail facility and twin tunnels for increased truck movements.

In 2011, PortMiami saw 8.3 million tons of cargo and 4 million cruise ship passengers. It is estimated that the dredging of Biscayne Bay could create upwards of 33,000 new jobs, double cargo passing through the port and increase PortMiami’s annual economic impact to more than $34 billion.

As with every dredging project, though, there is the potential for severe environmental side effects. In this case, dredging could damage Biscayne Bay, a shallow, subtropical lagoon home to many protected, threatened and endangered species such as dolphins, manatees, turtles and other sea creatures. Environmental advocacy organizations and local fisherman tried to stop, or at least delay, the project until further studies could be made. Their arguments centered on the risk of impaired water quality, contamination from spoils material, the unknown effects of 600 days’ worth of blasting, and secondary and cumulative impacts from a large-scale expansion project.

The case was in court until April of this year, when the environmentalists dropped their administrative challenge in exchange for legal fees and $1.3 million worth of restoration and monitoring projects. Some of these include: Creating 24 acres of seagrass beds to offset those destroyed by dredging, relocating 1,300 corals to 10 acres of artificial reef, and limiting blasting times to minimize potential fish losses.

Though environmental groups were unable to get tougher water quality standards, the agencies in charge of deepening agreed to publically post data that will allow the public to monitor potential violations.

Miami and Savannah were two of seven national infrastructure projects placed on a funding fast track by President Obama in July under the “We Can’t Wait Initiative.” Besides providing funding for a significant portion of Miami’s port project, it commits nearly $650 million to deepening the Savannah River from 42 to 48 feet.

Environmental groups represented by the Southern Environmental Law Center have sued the Corps, saying that a South Carolina pollution permit is needed to dispose of dredge spoils contaminated by cadmium on the South Carolina side of the river. In this particular case, environmental drawbacks include altering fish navigation and oxygen levels. To combat these, about 47 percent of the federal spending is allocated to build fish passageways, contain contaminated spoil and install bubbler systems to boost oxygen sediments — think a mechanical respirator working as life support for the river.

Most port cities have had to engage in deepening projects, and various consequences will ripple out from all of them. States, the feds and the Army Corps have a fine line to walk between deepening’s economic benefits and its implications for the environment.