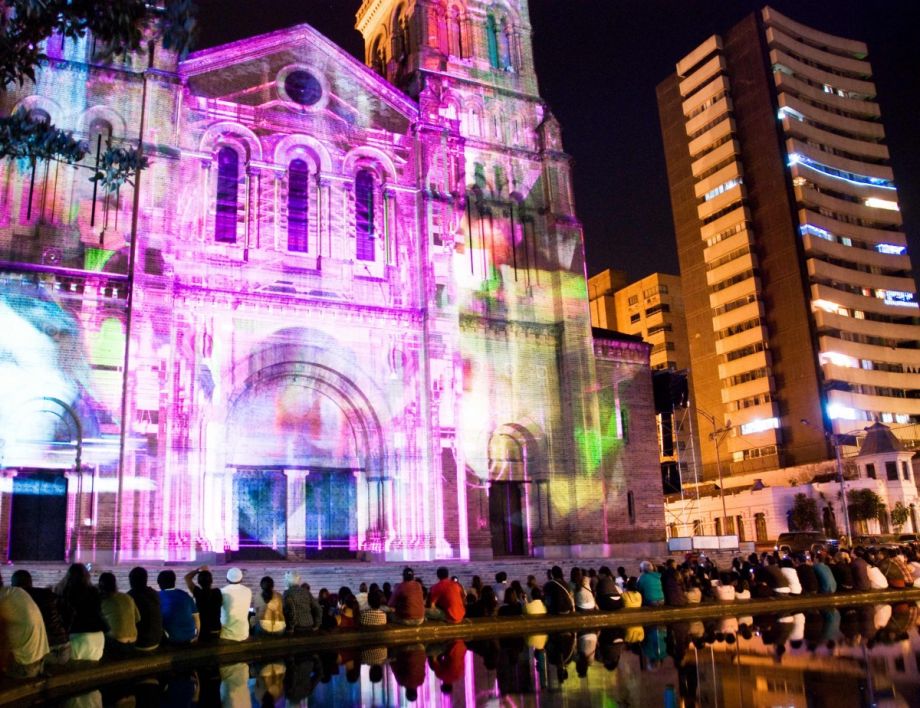 Medellín’s Christmas light show is one of the city’s biggest tourism draws.

For Sarah Capell and Elaine Sivyer, Medellín’s annual illuminations are a major reason why they chose the city as the place to spend their Christmas.

“One of the first things that jumps out at you when you look at pictures of the city is those light displays,” says Capell as the pair gear up for their month-long backpacking trip through Colombia. “We were reluctant to miss the English Christmas,” adds Sivyer, “but those lights [in Medellín] are about as Christmas as you can get.”

Rated in 2012 among the world’s Top Ten Places To See Holiday Lights by National Geographic Traveler, Medellín’s display is truly impressive, with walking tunnels, enormous structures set on median strips, and light formations carpeting swathes of the city’s river, all based around a different theme every year and visited by thousands of city residents and tourists each day.

Tourism is a powerful tool for developing-world cities, and between 2007 and 2012, the number of annual visitors to Medellín almost doubled, from 260,500 to nearly 404,000. Thirty percent of the visitors in 2012 were foreign, according to figures provided to Next City by the office of the city’s Undersecretary of Tourism. And while exact numbers for the Christmas period were not provided, hotel occupancy in the city is projected to rise more than 10 percent compared to the rest of the year, part of a pattern of year-on-year tourism growth for the holiday season. Medellín’s yearly exhibition, a tradition since the 1950s, directly contributes to its ongoing effort to improve its stature on the global stage and shake off its dodgy reputation.

But amidst the clamor for tourist dollars, pressing environmental concerns can often be overlooked, especially if the political will to prioritize them is lacking. So when thousands of visitors begin flocking to the month-long event, which this year includes 27 million light bulbs and comes at a cost of $9 million, one might assume that the demand for tourist dollars had trumped concern for the environment.

Yet one would be wrong. Since 2009, the event has been carbon neutral, with LEDs replacing incandescent lights, environmentally friendly materials used for the displays, and money plowed into reforestation projects large enough to offset not only the emissions produced as a result of the displays, but also by the influx of visitors and vendors’ vehicles and stalls. Such initiatives are especially significant given that Medellín is considered one of the most polluted urban centers in Latin America.

“We think about the resources of the city and within the project we put into practice environmental compensation and management plans,” explains Diana Victoria Ramírez, a senior forestry engineer who runs the project for EPM, the city’s public utility entity, which has assumed responsibility for the display for most of its 58-year history. “We take into consideration the flora and fauna and the green areas of the city, and year after year we plan for their continued protection and betterment.”

EPM also implements programs to engage the community, and extends light displays out the city’s fringe neighborhoods so that residents without the resources or opportunity to see the downtown event are not excluded.

Each year’s theme takes a page from the local culture. In 2012 it celebrated the biodiversity of the Antioquia region, of which Medellín is the capital. This year it combines traditional images of Christmas with elements of Antioquia’s culture and folklore. “We employ an interdisciplinary team of architects, engineers, designers, electricians and public officials, all working on the project since the previous year” says Ramirez.

It is on the basis of its sustainability, outreach to the community and celebration of local culture that National Geographic Traveler included the display in its global top ten.

“We care deeply about culture, about sense of place, about preservation of place and about sustaining the places that we love most,” says National Geographic Traveler Editor-in-Chief Keith Bellows. “Medellín now has really come up a lot in the estimation of travelers in the last five or six years, but when we think of Medellín we don’t really think of illuminations, so it all made for a really significant and notable attraction.”

For the city government’s tourism department the light show has become something of a flagship event, for which the attention brought by the magazine only underscores the commitment to marrying sustainability with economic development. “It’s recognition for an event in our city that has been going on for many years,” says Secretary for Tourism Sandra Echeverri Duque, adding that tourism has become a key element of the city’s ongoing transformation. “It’s all part of an integrated job for which the city has registered consistent improvements in education and security, allowing us to much more easily develop the tourism platform.”

For Ana Maria Lozano, who grew up in the city of Cali and moved to Medellín two years ago for work, the Christmas illuminations are one of her favorite things about her adopted home. “It makes it much easier for me to convince friends and family to visit if I have to work over the holidays,” she says. “I’ve seen the lights in most of the big cities here, but there is nothing like Medellín.”