Tree on the Corner May Be Worth More Than Your House 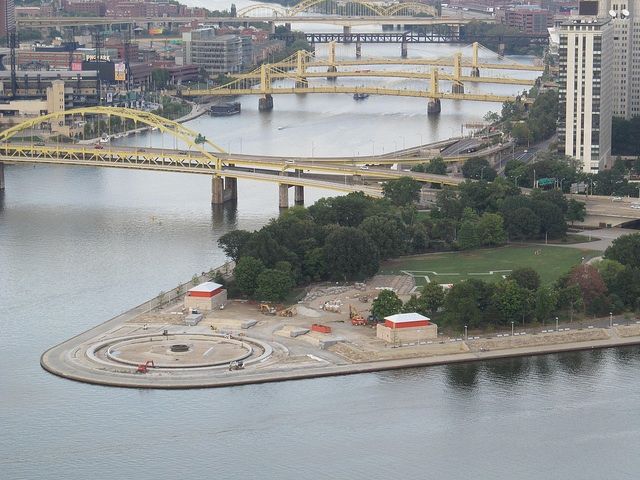 This was a problem — one of many faced by the cash-strapped city — and so Pittsburgh decided to consider its trees like it would any other asset: By measuring their benefits in terms of cold, hard cash.

At a time when cities across the nation are slashing street tree funding in order to balance strained budgets, Pittsburgh’s turn to monetizing the urban forest has become increasingly relevant. Trees in an urban setting, whether in sidewalks, medians, yards or parks, have benefits beyond giving shade.

And these benefits translate into dollars and cents: Trees filter air and water, sequester carbon, offer habitat and shade, reduce the urban heat-island effect, boost property values, buffer storms, and even provide a source of energy through waste wood and mulch, among other services.

To calculate the value of Pittsburgh’s street trees, a non-profit called Friends of the Pittsburgh Urban Forest (now Tree Pittsburgh) turned to a modeling program called i-Tree, released in 2006 by the U.S. Forest Service in partnership with Davey Tree company. Now in its fifth iteration, the free program allows cities and other users to describe the benefits of trees in language clear enough for those who can’t tell an ash from an aspen. Recently, the Forest Service released a mobile version of the program.

After inputting raw data from the inventory in i-Tree, Tree Pittsburgh found that the city’s street trees — strictly those planted in sidewalks and medians — provided $2.4 million worth of environmental and aesthetic value every year. (A 2011 analysis of Pittsburgh’s total tree cover, which involved sampling more than 200 small plots throughout the city, showed a value of between $10 and $13 million in annual benefits based on the entire urban forest’s contributions to aesthetics, energy use and air quality.) The values take into account energy savings from shade, impact on the city’s air and water, and the boost in property values associated with leafy neighbors.

Given the city’s annual expenditures of $850,000 on street tree planting and maintenance, Tree Pittsburgh concluded that the city received $3 in benefits for every dollar it invested in street trees. That math helped convince the city that upfront investment in trees was worthwhile, and so last summer Pittsburgh released a detailed master plan for maintaining and expanding its urban forest over the next two decades.

“The data has been extremely valuable,” said Matthew Erb, Tree Pittsburgh’s director of urban forestry. “The data is really the backbone of our master plan. Without that data, it would be kind of generic recommendations that you could apply to any city’s master plan.”

I-Tree is based on a model first developed by Forest Service researcher Dave Nowak in the late 1990s, derived from research he began in the late ’80s. Nowak’s goal from the beginning, first as a Ph.D. student at UC Berkeley studying Oakland’s urban forest, and later as a consultant for cities including Chicago and New York, was to provide a statistical basis for understanding the function of trees within a given city. His goal was not to protect urban forests by assigning them a dollar value per se, but rather to allow planners to see how changes to the urban forest can affect citywide environmental quality.

“We’re trying to help managers or politicians or mayors make informed decisions — and not just pull a number out of a hat — and develop the best design so you get the best return,” Nowak said.

I-Tree has grown considerably more complex since its launch, yet the underlying concept remains the same: You tell us about your trees, and we’ll use various multipliers to quantify what they do for you.

For example, the program uses an estimated social cost per ton of carbon emitted in the U.S. to assign a value to the carbon sequestration performed by urban forests. And it uses a GIS-based tool from the Environmental Protection Agency called BenMAP to calculate the economic benefits of reductions in air pollution.

For i-Tree version six, due out in mid-2014, Nowak hopes to add new modules that tabulate benefits related to air temperature, ultraviolet radiation and habitat for select bird species. Also contributing to these improvements are another five or six Forest Service researchers and six Davey Tree employees, who focus on the program’s front end. The two entities — one private, one public — have partnered on the project for more than a decade.

Their work is catching on. I-Tree software has been downloaded more than 10,000 times by users in the U.S., according to Scott Maco, Davey’s manager of ecosystem services. This includes city officials in places like New York, Milwaukee, and Chattanooga. The program also has a market abroad.

“That international component is growing at quite a rapid clip,” Maco said, pointing to clients in Canada, Australia, Brazil and Chile. Nowak is planning to develop new platforms for India and China.

Back in Pittsburgh, proving the case for investments in urban forestry has even led to a slight uptick in funding, Erb said, at a time when many cities are seeing quite the opposite.