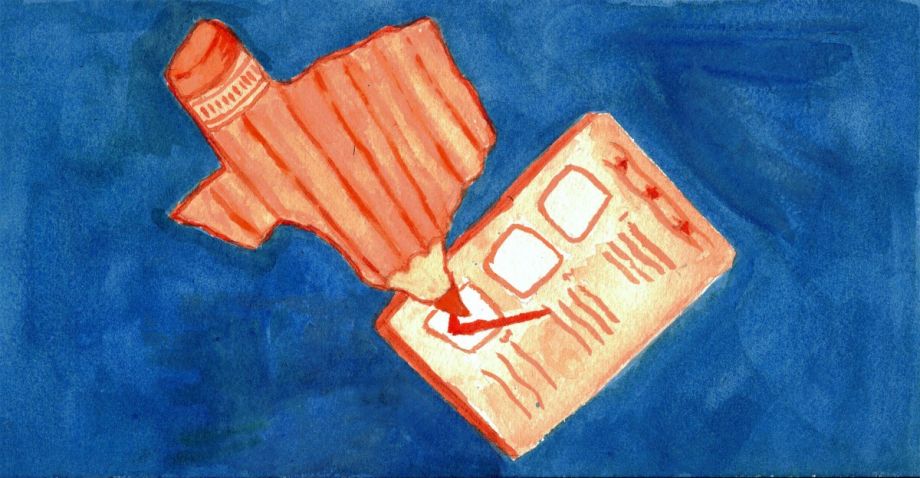 The law by the late State Rep. Paul Ragsdale, a Dallas Democrat who died in 2011, requires high school principals to serve as voter registrars and register eligible students twice a year.

According to the law, the Secretary of State, which assists county election officials with elections, is required to provide principals with instructions for requesting voter registration cards. But the office cannot enforce the law and is not even required to track requests for ballots.

The level of school engagement is ultimately left to individual secretaries of state.

At the beginning of each semester, the office emails high school principals with instructions on requesting ballots, registering students and returning ballots.

“Their office doesn’t work with us. They send an email at the beginning of the year to principals, but it’s just another email for them to read when they are already overwhelmed. Their job is to enforce the election code,” he says.

Floyd was elected to his at-large position in 2017, beating a two-term incumbent who was criticized for inflammatory Facebook posts about Muslims and lesbian, gay, bisexual and transgender people.

“If we got students engaged, then they would tell their parents about me, the parents would usually be surprised their teenager knew about a local election, and I’d get two more votes,” he says.

Pearland’s election that year saw increased turnout from an average of 2,000 to 10,000 voters. “By Texas’s municipal election standards, that’s an impressive amount,” he says.

According to Penn State research, voting is a habit, so young people who get into the habit early are more likely to become lifelong voters.

“The Texas High School Voter Registration Law was a surprisingly progressive attempt by the legislature to get young people registered and ready to vote. That said, far too many high schools have failed to participate in the program and empower their students,” he says.

And in recent years, new laws meant to weed out voter fraud have also made voting harder.

Even before the COVID-19 pandemic, says Bonner, “Texas was a difficult state to register to vote in on a good day.”

That’s because Texas lawmakers, who meet every other year, have spent the past decade chipping away at ballot access. Since 2013, casting a vote in Texas required presenting one of seven forms of photo identification. Student IDs were not among them.

To Republicans, the laws requiring photo identifications and imposing criminal penalties are meant to root out fraud. (A report from the conservative Heritage Foundation found almost 90 cases of voter fraud since 2008 in the state, out of tens of millions of votes cast.) To Democrats, the laws unfairly target people of color, the poor, elderly and young people who are less likely to have photo identification.

A 2019 report released by the Texas Civil Rights Project, an advocacy organization, compiled by a Freedom of Information Act request, found 38 percent of public high schools in Texas with 20 or more seniors either requested registration forms from the Secretary of State or conducted a voter registration drive.

The bad news: that’s still low. And grassroots civic engagement nonprofits, such as the Own Our Vote coalition (a coalition including the Texas Civil Rights Project), were largely responsible for the uptick. Eleven percent of schools were in compliance with the law because of a “partner group initiated” voter registration drive.

Requests from individual schools remained flat at 27 percent. The percentage of schools that received forms from their school districts crashed from six percent to nearly zero.

Those low numbers do not mean schools are purposefully defying the law, says Stephanie Gómez, TCRP’s high school voter campaign coordinator. There’s a lack of awareness on school administrators’ parts, and even when teachers or principals do manage to request voter registration forms, schools “are just are not hearing back” from the secretary of state’s office, she says.

The report puts the blame on the secretary of state’s office, though doesn’t flatly say the office is intentionally hindering voter access. Indeed, some secretaries have been more active than others. Former Secretary Rolando Pablos, who served from 2017 to 2019, asked superintendents to pledge that high schools in their districts would have a 100 percent registration rate. Some complied: Pablos lauded former Houston Independent School District Superintendent Richard Carranza, who now serves as Chancellor of New York City’s public school system, for his full participation.

But Pablos’ successors have not been as enthusiastic. Governor Greg Abbott, a Republican, appointed ally David Whitley to the role, though Whitley was forced to resign last May after a botched voter roll purge. His successor, Ruth Ruggero Hughes, who was appointed in August 2019, has traveled the state promoting voter engagement, including visiting high schools. But the office’s elections division has recently been occupied with promoting voter engagement during COVID-19. The office has been promoting best practices for safely voting in the July runoff.

They’ve also been mired in more lawsuits, this time about voting by mail. Among Abbott’s emergency declarations was moving a May runoff, which includes a Democratic nomination for the US Senate, to July.

Since the coronavirus epidemic posed a public health threat, Democrats sued to expand the option to vote by mail to anyone concerned that voting poses a threat to their health. Currently, Texans must be 65 years or older, disabled, out of their home county on election day, or confined to jail but eligible to vote to qualify. The state Democratic party argued the threat of coronavirus, especially to those with underlying health conditions, should count as a disability. Under that interpretation, then, voters could request a ballot by mail. The state Supreme Court sided with the state, agreeing that voting by mail should be expanded because of fear of contracting the coronavirus.

High school students still need to be registered to vote before they can request a mail-in ballot, of course.

Floyd, who is not running for a second term, says the legislature must amend the law making the Secretary of State enforce it. And principals need to get creative, he says. He suggests that when a student turns 18, the principal celebrate the birthday and register the student to vote at the same time.

As a librarian in the Fort Worth Independent School District and active voter, Rachel Pilcher feels obligated to register students to vote. Her experience getting ballots has been easy. But, she says, district and school administrators support voter registration, but may not understand the details of the process. Pilcher notes, for instance, students cannot be compelled to register to vote, or may not qualify.

“I have to constantly explain that just because [students] are age eligible it doesn’t mean they meet all the other eligibility requirements or that they want to register. We can’t force students to register and I really don’t feel comfortable asking them why they aren’t registered,” she says. “It felt really weird when I had to explain why we couldn’t bring students in individually to register, then make a spreadsheet as to why they won’t. I guess as a librarian, I am a bit more aware of keeping track of some personal information and why we don’t want to do it.”

Students may also have been registered by teachers.

Among those teachers are Allan Saxe, a teacher at the private Northstar School in Arlington. “I have always urged students to register and vote and please be an INFORMED and educated voter,” he told Next City by email.

Getting ballots directly to students was complicated by the coronavirus pandemic, which forced school districts to move operations online. But teaching virtually didn’t stop Jessica Lugo and her team from getting creative.

Lugo, a social studies teacher at Trinity High School in Euless, a city north of Fort Worth, integrated the importance of voting into their lesson plans.

Her colleagues made a video for Earth Day, for instance, “encouraging participants to share (in a non-partisan way) how their vote makes a difference for the environment. Then we’ll share that video widely, especially with student groups and their social media accounts,” she says.

Bonner’s organization has increased their use of digital tools and other options not available to teachers, such as texting students. “We’ve also invested in relational organizing tools so that more folks that are stuck at home can reach out to their friends and neighbors about the upcoming runoff election,” he says. Bonner also hosts MOVE University: Social Justice for Social Distancing, which brings in policy experts for live conversations. “We’re hoping to use this time at home to equip people with the tools they need to be better advocates in their community,” he says.

This story was produced with support from the Solutions Journalism Network’s Renewing Democracy program.