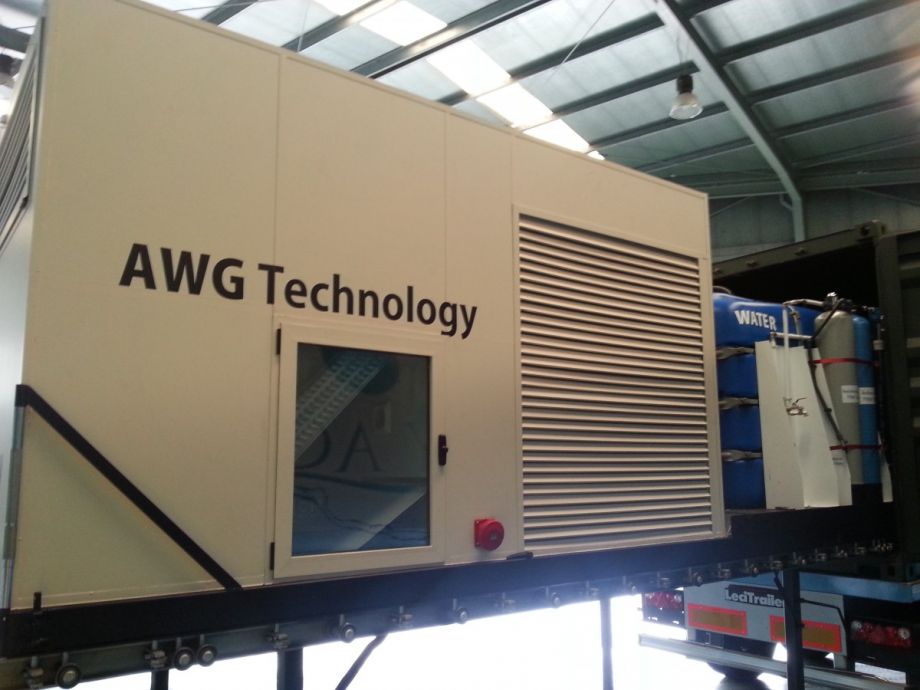 In the San Diego suburb of Carlsbad, a new plant to desalinate seawater is almost ready. For about a billion dollars, it will produce 7 percent of the area’s drinking water, courtesy of the Pacific Ocean. But in these times of record drought, two Texas entrepreneurs are advocating another solution: Instead of pulling fresh water out of the sea, they want to pull it out of the air. The machine they’re developing at Trinity University in San Antonio, called an atmospheric water generator, is still in its pilot phrase. But to hear Moses West tell it, if the climate conditions are right, the AWG has the potential to end drought.

West, who’s testing the machine along with business partner John Vollmer, calls himself “a water farmer.” He explains that there are three potential sources of human drinking water: groundwater, rivers and gas. Thanks to NASA’s GRACE satellite system, which measures the abundance and quality of aquifers, we know that the Earth’s groundwater supply is dwindling — and increasingly contaminated by pesticides and runoff. Rivers, at least near any major metropolitan area, are out of the question as sources for drinking water. That leaves water vapor, which West calls “the purest, cleanest, most abundant, recyclable source of water that exists on the face of the earth.”

The atmospheric water generator was first developed in Spain, another country with perpetual drought problems, but according to West, it performs best in high-heat, high-humidity areas. It can reliably produce between 2,000 and 3,000 gallons of water per day, and with the proper institutional support, West says, “I know how to scale this up to produce a million gallons a day, 30 million gallons a month.”

The best performance the AWG ever clocked, according to West, was on a day with 95 percent humidity and a temperature of 79 degrees Fahrenheit, when it produced a liter of water at 0.08 kilowatt-hours. But while hot and humid is the ideal combination, it’s not absolutely necessary. West talked about a recent trial in Cordoba, Spain, where the humidity was closer to 25 percent and the machine still produced 1,000 liters a day. He declared, “If you’ve got high temperatures and 30 percent humidity in the atmosphere, there’s no such thing as a drought.”

Given the scale of the drought problems that many cities around the world are facing, this might strike many environmentalists and urban planners as wishful thinking. West has clearly spent time considering how to scale the AWG up to be a useful tool in large urban areas, but the scope of the problem — New York, for example, uses about a billion gallons of water per day — makes it hard to see AWG as a single solution.

Diana Glawe, an assistant professor in Trinity’s engineering science department who is overseeing the project’s pilot phase, says that “just like energy, a robust water portfolio requires a diverse set of alternatives … I don’t think [AWG] is the silver bullet, but I think it has a place among alternative water sources.” Glawe says that for now, scaling the AWG up is simply a matter of clustering several machines together. Given the high average cost of a machine, that involves selling local governments on the idea that they’re viable large-scale solutions.

How viable largely depends on the city and its climate conditions. “Condensate potential,” or the measure of how much moisture can be extracted from the air, is highest in hot, humid cities. San Antonio is in the position of having just gone through a major drought despite its very high condensate potential, making it an ideal place to test out the technology. A drought-stricken city with a drier climate, like Los Angeles, might use its plentiful sunshine to power AWG machines with solar energy instead of fossil fuels, lessening the environmental impact of operating the machine. But with less humidity, the machines wouldn’t operate as efficiently.

The AWG’s ability to function also depends on an area’s air quality. A city like Los Angeles doesn’t just have a dry climate, it has highly polluted air. Glawe pointed out, “If you’re breathing the air, the same things you’re breathing in the air are going to be in the water. If you’re in a city that’s highly polluted … you would have to consider that and design the system to remove those pollutants.” Extra air filters and mechanisms to purify the extracted water would increase the machine’s cost.

All this is being worked out in the machine’s pilot phase, according to Glawe. At the moment, the AWG is being tested to make sure it complies with protocol set by the Texas Commission on Environmental Quality, a statewide agency that partners with local water departments to ensure water quality. TCEQ spokeswoman Andrea Morrow told me that because this is a new technology, the AWG’s inventors “must demonstrate the design and operation of the facility will produce water that meets federal and state water quality regulations.”

Beyond the standards hurdle, West says he doesn’t know exactly where he’ll take the machine — but he promises that wherever he ends up, the goal won’t be profit. “I don’t accept private donations,” he says. “I don’t accept venture capitalists. This is a federal, state and local government problem. This is an international problem.”