Texas Sets a Wind Power Record (or Two) – Next City 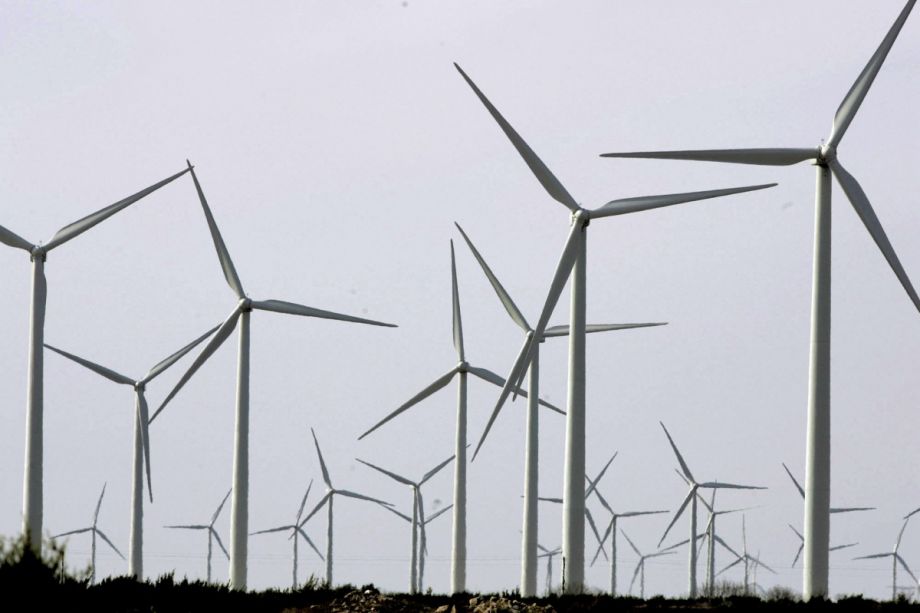 Texas may be known for its oil and gas industries and its love of driving, but on Wednesday, Mar. 26, the state set a record of a more environmentally friendly type: wind power. At 8:48 pm, wind power was feeding 10,296 megawatts of power into the state’s electricity grid, according to the Electric Reliability Council of Texas, blowing past the previous record of 9,681 megawatts. The 10.3 gigawatts of wind power worked out to nearly 29 percent of all power consumed in the state at the time. Amarillo in the northern part of the state saw gusts of up to 30 miles per hour on the evening the record was broken, with winds in Corpus Christi hitting 25 miles per hour — breezy, but by not exceptional for the area.

The total wind generation record wasn’t the only one that was broken. The following morning, on Thursday, Mar. 27, Texas hit a wind power share record, when an unprecedented 38.43 percent of the state’s power came from windmills (unprecedented for Texas at least — wind power production in Denmark has at times exceeded the country’s total demand for electricity), although the record was achieved at a sleepy 3:19 am. Throughout all of 2013, wind was responsible for 9.9 percent of all electricity generated in the ERCOT zone (which handles about 85 percent of the state’s electricity load), up from 9.2 percent in 2012.

With its vast expanses of open, windswept land and renewable portfolio, Texas is the largest wind power producer in the United States. As Anna Clark pointed out in her Forefront on Houston’s utilitarianism making way for its progressive politics, Houston is the country’s largest municipal purchaser of renewables. The third and fourth largest purchasers are Austin and Dallas. The amount of electricity in the state generated from wind rivals that of many countries. In fact, Texas has more installed capacity than Italy or France, and even more than the United Kingdom, an offshore wind powerhouse. At present, there are more than 12 gigawatts of installed wind capacity in the state — that’s more than the mandated 10 gigawatts by 2025 according to the state’s renewable portfolio standard. Another 8 gigawatts are planned or under construction, in addition to more than 26 gigawatts being considered in a more tenative manner.

Most of the electricity came from West Texas from sources like the Roscoe Wind Farm operated by European energy giant E.ON, the largest in the state, or the nearby and similarly-sized Horse Hollow Wind Energy Center. While the western part of the state is abundant in wind, it’s short on people to use the power it generates. Only about 14 percent of the power last Wednesday, meanwhile, came from the state’s Gulf Coast, home to Houston, its largest city, along with other large population centers and electricity users like Galveston and Corpus Christi.

To bridge the gap between the power-flush west and the power-hungry central part of the state, nearly a decade ago the Texas legislature approved the Competitive Renewable Energy Zones initiative. The $8.6 billion worth of CREZ lines span much of the state, from Amarillo in the north to San Antonio in the south and Odessa in the west to Dallas in the east. With the last of the 345-kilovolt transmission lines energized in December, the system now has the capacity to carry up to 18.5 gigawatts of wind power at a time. This works up to nearly twice as much transmission capacity as the wind generation record that was set last Wednesday, meaning that the grid now has plenty of slack.

The project succeeded in dramatically reducing the so-called “curtailment” of wind power, whereby electricity generated could not be fed into the grid and sent to consumers because of insufficient transmission capacity. According to Department of Energy data analyzed by the American Wind Energy Association, curtailment in Texas dropped from 9.7 percent of all potential wind energy in 2009 to just 2.7 percent in 2012. Other areas in North America have been emulating the success of the CREZ — the Midcontinent Independent System Operator in the Midwest and the Canadian province of Manitoba could shuffle around 15 gigawatts of wind-generated electricity. Notably, the Southwest Power Pool, which serves Oklahoma and Kansas, along with tracts of Texas, New Mexico, Louisiana, and Arkansas, is undertaking a similar transmission network and cost allocation policy that will hook into the Texas network. The planned system would also link to two of the continent’s gargantuan regional grids, the so-called Eastern and Western Interconnections, on the west coast and in the southeastern U.S. along the way.

All the new transmission capacity and wind farms coming online mean more business for those further up the supply chain. BNSF Logistics, a subsidiary of the Burlington Northern Santa Fe Railway Company, owned by Warren Buffett’s Berkshire Hathaway, is in the midst of opening a facility for transporting large wind turbine components, and has acquired 200 acres of land for what will be dubbed the West Texas Wind Energy Logistics Center north of Lubbock, in the heart of Texas’s wind country. “The site for the logistics center,” reported the Amarillo Globe-News last month, “is within a 100-mile radius of 85 percent of planned wind projects, according to information from BNSFL.”

“Reducing this freight cost will result in significant savings for all Tri Global Energy projects,” said the CEO of Tri Global Energy, a Dallas-based clean energy company that will be the BNSF Logistics facility’s first customer. The logistics of transporting ever-larger wind turbines can be quite difficult, with the U.S. Department of Energy setting aside $2 million for research into moving the massive windmill components around the country.