Will Texans Swallow Toilet-to-Tap Water to Survive a Drought? 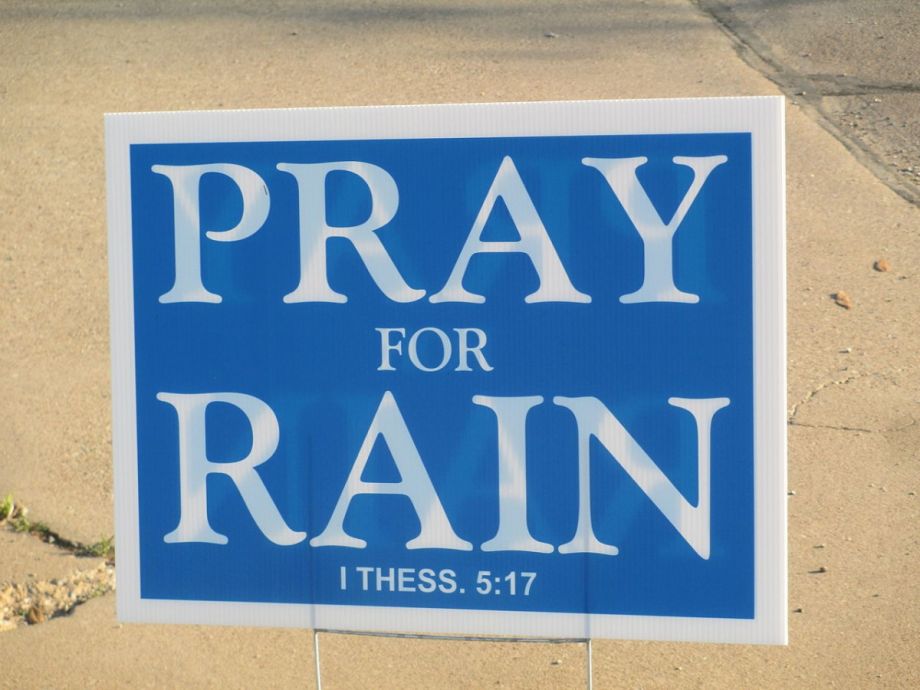 In Wichita Falls, Texas, they’ve already tried praying for rain. Local clergy and their congregants have gathered in a dry lake bed to ask a higher power to ease the three-year drought. One woman in the city of 105,000, convinced that communal prayer caused some welcome rain in February last year, organized a drive to put up lawn signs citing the book of Thessalonians and exhorting others to “Pray for Rain.” So far, the lawns are still brown.

City leaders have encouraged the prayer effort. Earlier this year, desperate for solutions, they also agreed to a $300,000 six-month contract to try the controversial technique of cloud seeding, which proponents say can increase naturally occurring rain by 10 to 15 percent. There haven’t been many clouds to seed, and early runs haven’t amounted to much.

They’ve also implemented some more concrete measures, declaring a Stage 4 drought emergency. That means no outdoor watering at all for homeowners, no watering of golf courses with city water, and the imposition of water surcharges and fines for excessive use. The city has cut its overall water consumption by more than half since the drought began.

Still, Wichita Falls could run out of water within two years if things don’t change. And so the city has announced it is now turning to a more reliable and scientifically proven drinking water source: the sewage system.

The Wichita Falls water management team has built a 13-mile pipeline that will change the route previously taken by the city’s wastewater. Instead of being treated and then funneled into the Big Wichita River, where it is cleaned by natural processes on its way to a reservoir and further refinement, the wastewater will go directly to the water treatment plant to be mixed, in a 50-50 ratio, with reservoir water. Then a four-stage filtering process, chlorination and reverse osmosis will make the water fit to drink, as safe and pure as any that comes out of a tap already.

The proposal, which is currently undergoing review by state officials, is essentially a human recreation of the natural cycle of water purification. “Inside the treatment plant, we speed those processes up,” Daniel Nix of the Wichita Falls public works department told NPR. “So rather than wait several weeks for ultraviolet radiation from the sun to disinfect or kill bacteria, we do it in the plant using chlorine. It takes a matter of minutes to do it instead of weeks.”

The practice, known as “direct potable reuse” (DPR) is not new. The city of Windhoek, Namibia, population 250,000, has been using it since 1968. But the concept of “toilet-to-tap,” a term that its proponents would rather you didn’t use, has been a tough sell to consumers. Orange County, California, has gone with a different type of approach, known as “indirect potable reuse,” in which treated wastewater is mixed with groundwater and treated again — a step that is not necessary for safety and one that increases cost. It helps, however, with public relations, and Wichita Falls officials will have to address the perception of DPR if they are going to make their program work.

The success of a smaller DPR effort in the water-stressed West Texas community of Big Springs has shown that attitudes might be changing by necessity. But some in Wichita Falls are still showing initial resistance.

“Just the concept of drinking the water that yesterday you sent along its merry way … I don’t think anybody wants that,” Wichita Falls radio host Tim McMillin told the Weather Channel. “The thought of it definitely grosses me out,” resident Kira Smith said on NPR. “I’m sure that they would clean it and filter it up to standards, but I think just the idea would be — it’s sort of a mindset kind of thing, you know what I’m talking about?”

In places such as Wichita Falls, where Stage 5 “drought catastrophe” conditions are now within sight, that mindset will likely have to change if the community is going to remain viable. And if the chronic water shortages in drought-prone, high-population areas such as the American Southwest persist — as is likely — DPR might be the only way to ensure a stable water supply. The idea of drinking recycled wastewater might soon be commonplace.

And as some Wichita Falls residents recognize, it’s not that different from the way things work naturally.

“People joke about potty water, but many cities discharge wastewater into rivers and lakes and it goes downstream to the next city. It’s a fact of life,” Wichita County Judge Woody Gossom told the Fort Worth Star-Telegram. “We’d rather not think about it in those terms, but all water is recycled.”