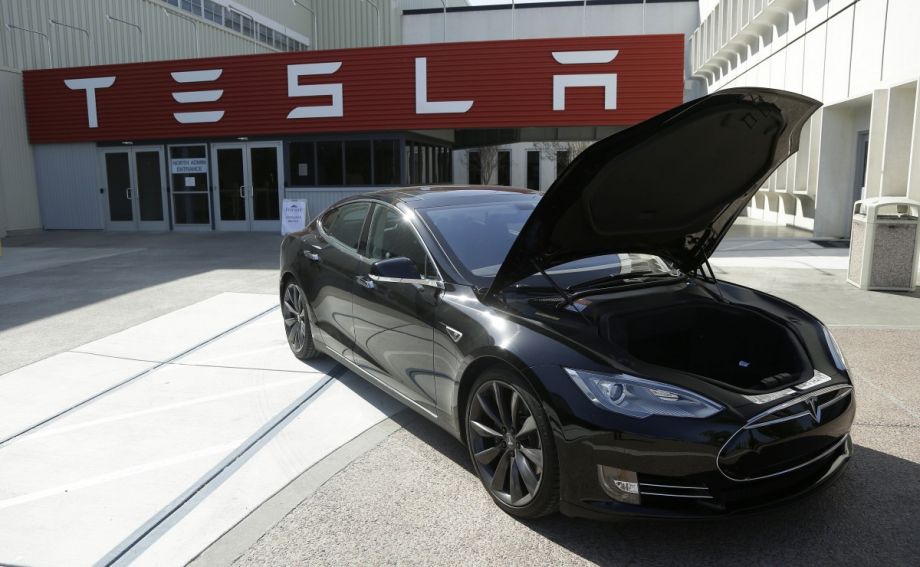 A Tesla car sits outside the electric vehicle factory in Fremont, California, where only 2 percent of households don’t have cars. (AP Photo/Jeff Chiu)

Geographically it sits in Alameda County along with Oakland and Berkeley. But as home to the Tesla Factory, Lam Research and Western Digital, Fremont seems to fit more with the Santa Clara County cities (Cupertino, San Jose) that, together, make up the Bay Area’s tech hub.

With plans underway for a new downtown built on the principles of green transportation and transit-oriented development, Fremont’s split identity is coming into focus. On the one hand, it boasts more electric vehicles than any city in its home county, with nearly 3,000 rebates issued. One zip code, the wealthy 94539, is home to more EV drivers than any other in California. On the other, bus service run by the Alameda-Contra Costa Transit District (AC Transit for short) remains infrequent and underused, creating a kind of vicious cycle for those without access to cars, let alone EVs.

On both counts — EV ownership and public transportation — the city wants to up its game. Transportation accounts for 58 percent of Fremont’s total emissions, DiFranco says. Statewide, that number is a much lower 38 percent (according to these six-year-old California figures). And Fremont’s relative high is actually in keeping with regional norms; last year, a SPUR report highlighted Silicon Valley’s car-centrism, noting that 87 percent of residents drive to work each day.

Not surprisingly, Fremont’s Climate Action Plan focuses heavily on weaning its residents from gasoline. One strategy involves encouraging EV ownership with infrastructure, a task that can be difficult for municipalities due to issues of private land ownership and wiring. (I’ve covered that in more depth here.) DiFranco says that although EV incentives tend to come from state-level policies, funding from the California Energy Commission is available to cities. Fremont plans to use its portion for new ports throughout downtown, with the city’s chamber of commerce adding additional chargers.

But while higher-than-average EV ownership has the potential to create a kind of virtuous cycle — ownership leading to public-sector investment leading back to ownership — DiFranco says that the opposite has historically been true with the city’s AC Transit lines.

“Today’s service in South County is infrequent, carries fewer passengers and is less productive than the AC Transit average,” a summary on the agency’s website reads, pointing back to that vicious cycle. There are few riders, so most of the lines operate at 45-minute or hourly frequencies. And so, there are few riders.

And in some ways, that makes sense. According to the U.S. Census, Fremont’s median income is $102,000, nearly double Oakland’s $53,000. Only 2 percent of Fremont’s population live in households without cars, compared to Oakland’s 8 percent. Transit dependence obviously isn’t as high in Fremont, and county funders should allocate accordingly.

But with a new regional rail BART station slated to open this year and service eventually planned for Santa Clara County, more workers will be coming into Fremont car-free. If the city is serious about encouraging transit-oriented development, it needs to better its inter-city transit, and DiFranco says leaders are looking at a number of options.

“It’s the infrastructure that will really help us evolve from a suburb into a strategic urban community,” she says of the new BART station. Ideas for connecting it with key locations throughout the city include car-sharing, bike-sharing and shuttle services, including on-demand pick-ups and drop-offs.

AC Transit is also trying to figure out how to beef up Fremont’s routes. According to the Contra Costa Times, the district anticipates a 14 percent expansion in service thanks to the Measure BB transportation tax approved by voters last November. For the region around Fremont, proposed changes include increased frequencies for some lines, splitting others to cover more ground, and creating flex service, a model targeted at low-density areas in which passengers schedule routes ahead of time.

“Because we’re at the end of the line, ours are often the first lines to be slashed or reduced,” DiFranco says of bus service. “But as we’re expanding, infilling and becoming more urban, we want to make sure our community feels more connected.”

When it comes to EV ownership, Fremont is obviously doing something right. Hopefully increased urbanization will also lend some virtuous cycle encouragement to its less glamorous modes.