Temporary Playground to Turn Kids Into Planners – Next City 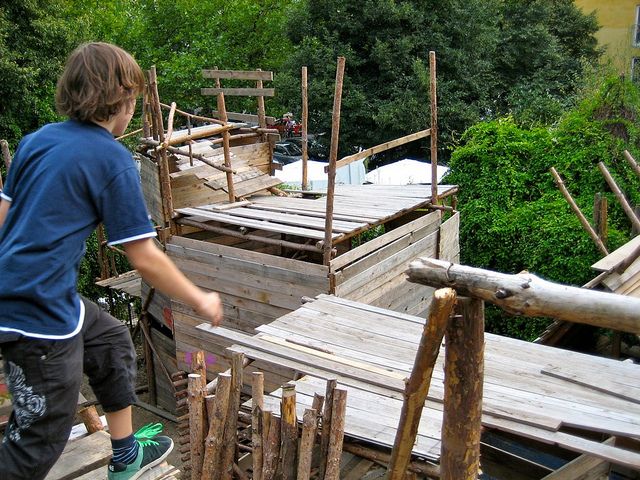 A child plays on the Kolle 37 playground in Berlin. Credit: Kristen Murray on Flickr

In a gentrified borough of Berlin, there is a micro-city of wooden ramshackle huts, bridges made of planks and a stone kiln. Children, ages six to 16, labor atop makeshift scaffolding with their own hammers and saws.

Don’t be alarmed — this is not a slum or work camp or some strange commune out of Lord of the Flies. In fact, it’s a playground. Kolle 37 is one of Germany’s most successful attempts at reforming how children play and learn by providing an interactive space for play. It has grown from a spielwagen, or portable playground built and run by local artists, to a permanent location in the early 1990s.

Alex Gilliam, director of Public Workshop, a design firm devoted to community participation and youth engagement, endorses Berlin’s playground, calling it “a place of imagination and exploration that melts even the most hardened cynics.”

Now, Gilliam and the Public Workshop are applying a similar strategy in downtown Philadelphia. Beginning this week, youth volunteers will lead in the design and construction of a temporary playground at 17th 19th and Walnut streets, the site of the Philadelphia Horticultural Society’s pop-up garden and event space.

But will a concept that works in a progressive borough of Berlin also work in the complicated legal landscape of an American city, where strict safety guidelines have defined playground construction for over 30 years? Gilliam is confident that it will, and not only out of blind faith. He said that for youth engagement and crowd-sourcing projects to avoid liabilities and result in a successful finished product, there must also be subtle top-down management.

“There is this push-back to top-down planning where if it doesn’t come entirely from the agency of the child or the neighborhood, then it is invalid,” he said.

Here’s how Gilliam intends to disprove that: He and a few older volunteers will construct a series of well-designed towers to serve as reference points and inspiration for the young builders, a move consistent with Gilliam’s strategy of influencing rather than directing the course of the project. As he wrote in article for Lab|Log and republished on Next American City, “Of the many different new tools for participating as a citizen in our communities, I currently find the ones that are focused on ‘doing’ and ‘showing’ the most consistently compelling.”

Even the 1-by-2-inch pieces of wood, to serve as the playground’s primary building blocks, were selected to encourage low structures. That way, Gilliam said, there is not an immediate tendency to build higher, more dangerous structures.

Another key feature lies in the playground’s impermanence. The fact that it will be dismantled before long-term wear and tear becomes a safety issue negates the need for inspections, permits and the continued costs of maintenance.

Despite these prods, so much of the project’s success will depend on the commitment by young builders. But that is where Gilliam allows himself to trust the innate creativity of young people and the potential of engaging it.

“It is remarkable and for many people, entirely counterintuitive to think that actually giving children the opportunity to experience more risk, to have more ownership over the world around them, to learn the things that interest them and to actually fall down once in a while is actually a really good thing,” Gilliam writes on Public Workshop’s website.