Columbus Proves Parklets Don’t Have to Be Perfect – Next City

Columbus Proves Parklets Don’t Have to Be Perfect 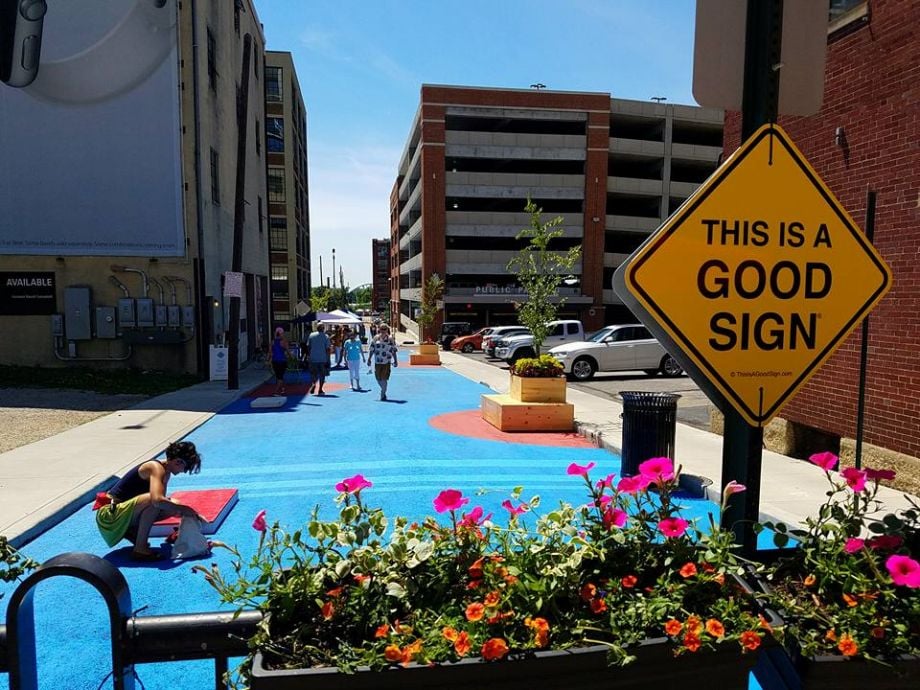 In all of Columbus, Ohio, two short blocks and three parking spaces might sound small, but for nonprofit advocacy group Transit Columbus, they’re the seed from which a more pedestrian-friendly city might grow. The group, whose mission according to board member Jess Mathews is to champion a better-connected Columbus with a “21st-century transportation system,” just opened its fourth temporary pedestrian project this week. Two blocks of West Cherry Street have been closed to traffic, painted bright blue with big red and small yellow polka dots, and enhanced with picnic tables, planters, and a community mural. A few blocks away, Transit Columbus’s third parklet is installed in a parking space in front of Café Brioso, and just got approval from the city to remain two months longer than planned — until September — because it’s been so successful.

“Our organization fully understands the importance of improved public spaces, streets being not only for all modes of transportation but destinations as well,” says Mathews. While most of Transit Columbus’ work focuses on expanding public transportation options, the group’s Placemakes initiative is all about activating streets as public space. “Streets are a huge asset for every city that I think goes unrecognized or are not always fully used to their potential.”

That’s in part because a lot of people don’t see them as public space — even though many argue we should count them as such. “[People] think of public spaces and they think of parks or beaches, and not necessarily streets,” says Mathews. “So we try to broaden their minds on that.”

The West Cherry Project may be the first in Columbus to close off a street to create a pedestrian plaza. Technically, it’s temporary, a two-month public engagement process that kicked off last week. But Mathews says the city is already in talks about keeping the space longer, and possibly extending it. West Cherry Street is just four blocks of downtown Columbus, closed to through traffic on one end and feeding into a riverside park on the other. If it were permanently preserved as a pedestrian space, it could serve a vital role in connecting the Scioto River to the High Street commercial corridor.

In the meantime, though it’s small, it’s mighty, because like all of Transit Columbus’ work on streets and public space, it demonstrates what’s possible. The project was funded in part by an Ohio Arts Council grant, at a cost of about $35,000. But it’s also a bit of a gamble. Right now, West Cherry has just a few abutting businesses. “At first I was nervous actually about choosing West Cherry just because I didn’t think that the foot traffic was there, and for the type of project we were doing we obviously really needed foot traffic for it to get momentum and I think in order to be taken seriously,” says Mathews. But she’s heartened by mixed-use developments that are being built on surrounding streets, which will have ground-floor storefronts and housing above. Several of the developers supportive of the West Cherry pedestrian plaza spoke at its launch. “It’s prime real estate right now,” says Mathews.

Just a few blocks away, the nonprofit’s new parklet is also chipping away at the perception that streets are for cars. A parking spot on High Street has been replaced with a wooden structure with seating, planters and two semi-transparent lithographs of Columbus’ buildings by local artist Leah Storrs. Designed by Darin Hadinger, the parklet is also equipped with solar panels that power the letters “A,R,T” on a sign mounted on the street side that reads “PARKT.”

Each of Transit Columbus’ parklets has built on the last, says Mathews. “It’s great to see the evolution of the parklets here and what money can really buy you,” she says. The first one had an ambitious structural design — including a swing — that had to be scrapped when one partner in the project dropped out. With a budget of $1,800, the group improvised, installing Astroturf, squishy patio furniture and plants blooming in pallets. It was scrappy, “but it was cool,” says Mathews, “because we installed it on a street that had upcoming businesses, so it fit the environment. It was really the up-and-coming parklet. So it may not have been the prettiest to look at, but I didn’t care because I was just so determined to get the concept out to the people.”

Now, with pedestrian-priority concepts gaining more visibility in Columbus, Mathews wants them to stick. Transit Columbus has hosted Open Streets for the past two years, and plans to close off .8 miles of street in downtown Columbus again this September. West Cherry could become permanent, and the nonprofit is seeking advice for how to keep the parklet active come winter. Mathews has talked to groups in Philadelphia and Indianapolis about how to maintain a structure like this through the colder months. “Winter sucks but people still want to do things outside,” says Mathews.

She’s also applied for a grant for a drop trailer that would allow Transit Columbus to move the parklet place to place, not just in downtown. Just like the first year of Open Streets proved to business owners it could be a boon for them, moving the parklet can help more business owners see that there can be more benefit to a parking space than just storage for cars. “Like anything else it’s getting people to feel it and experience it,” says Mathews.

But, she says, “we don’t want to continue to do temporary, that’s not the point. We do temporary to get the buy-in and the support, but we really want this stuff to stay.”