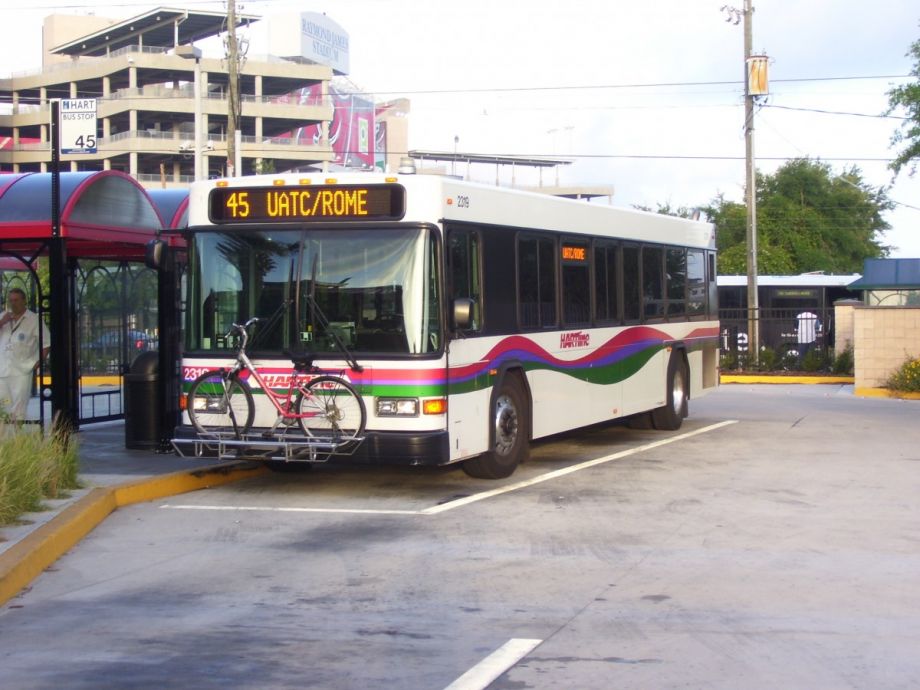 A sales tax increase that’s expected to pass in the Tampa, Florida, region will fund roads and public transit expansion. (Photo by Wslupecki)

Chances Look Good for Tampa Transportation Tax Measure
Officials in Hillsborough County, Florida, are optimistic about the prospects for a one-half-cent sales tax increase for transportation they intend to submit for voter approval in November. Should it pass, Tampa officials are set to proceed with plans to add light rail to the city’s transportation mix.

A news story in the Tampa Tribune notes that a shift in emphasis from transit to roads makes passage of this sales tax proposal more likely. Voters defeated a one-cent tax hike last year that would have gone 75 percent to transit.

The proposal being prepared for the voters this fall flips that ratio, sending 75 percent of its proceeds to road and highway projects. But a provision in the proposal will also allow the cities of Tampa, Plant City and Temple Terrace to devote 10 percent of their share of the proceeds to mass transit.

Along with the 25 percent share of the countywide tax going to Hillsborough Area Regional Transit (HART), the measure would provide enough money for the light-rail project, according to Tampa Mayor Bob Buckhorn. On top of that, HART would also have the resources needed to add express bus and bus rapid transit service to its existing system.

Kevin Thurman, executive director of the pro-transit group Connect Tampa Bay, praised the tax proposal for its flexibility, telling the Tribune, “It’s exactly the kind of balanced approach we’ve been asking for for a long time. If the city invests its money well, we could end up having more money for transit while making sure every road in the county is maintained.”

Pro-highway advocates quoted in the story also approved of the proposal’s mix of road and transit spending. As always, however, the devil is in the details, and before the tax is placed on the ballot, the officials who together comprise the county’s Transportation Policy Leadership Group will prepare a detailed list of projects to be funded by the measure.

Back to the Future in Belmont, N.C.?
Move over, Fort Collins, Colorado. If civic leaders and a nonprofit foundation in Belmont, North Carolina, have their way, the city of some 10,000 residents located between Charlotte and Gastonia will become the smallest U.S. city with regular streetcar service sometime next year.

Supporters of restoring streetcar service in Belmont, N.C., are crowdfunding the project.

Backers of a project to restore service on the tracks of the former Piedmont and Northern interurban line, which connected Charlotte and Gastonia, are currently raising funds to buy a vintage streetcar from its owners in Vancouver and ship it to Belmont to return it to service.

Time Warner Cable News reports that the Indiegogo campaign launched by Belmont Trolley seeks to raise $16,000 in 60 days to buy the streetcar.

The tracks themselves are intact and owned by the North Carolina Department of Transportation, which has expressed its willingness to lease them to the nonprofit.

Nathan Wells, Belmont Trolley’s secretary, stressed that no taxpayer funds would be used to restore service on the line, which last carried passengers in the 1930s.

City officials are also on board with the project. City Council Member Ryan Schrift said the streetcar restoration would “ … help Belmont be independent of the other municipalities here in Gaston County and really stick out.”

Rolling Memorial Returns to Service in Hiroshima
August marks the 70th anniversary of the atomic bombing of Hiroshima and Nagasaki, an act that brought World War II to a quick end at a tremendous cost in human lives. One of the survivors of the attack has recently returned from retirement in order to serve once again as a rolling reminder of the horror of nuclear war.

Asahi Shimbun reports that Hiroshima Electric Railway Co. returned Car 653 to service at 10:30 a.m. on June 13th after a six-year hiatus. Car 653 is one of three 650-series tramcars that have remained in service ever since the atomic bomb attack as a memorial to those who lost their lives.

The 650-series cars, introduced in 1942, were the newest cars in HERCo’s fleet when the Americans bombed the city. Despite the loss of 90 percent of its rolling stock and 185 of its 1,241 employees, the company, popularly known as “Hiroden,” had trams back on the streets a mere three days after the devastating attack.

In Hiroshima, a tramcar has been restored to its wartime color scheme.

Car 653 has been restored to its wartime color scheme, with gray on top and blue on the bottom. Its two companions, 651 and 652, continue to operate in regular service in a cream-and-green livery.

Sachiko Masumo, an 85-year-old survivor of the bombing, was among those on hand to witness the car’s departure from JR Hiroshima Station on June 13th. She began her career with Hiroden as a driver and conductor in 1942 after graduating from a women’s vocational school the company sponsored, and she continued working for two years after the attack.

“It is very moving to see the same streetcar that endured the city’s heinous experience still running in its original color,” Masuno said. “It is a very precious peacetime treasure.”

Car 653 will operate between JR Hiroshima Station and Hiroden Nishi-hiroshima Station on weekends and national holidays through August 30th. The route takes the car past the iconic Atomic Bomb Dome. Video displays inside the car play documentaries featuring testimony of atomic bomb survivors.

Know of a project that should be featured in this column? Send a tweet with links or details to @MarketStEl using the hashtag #newstarts.