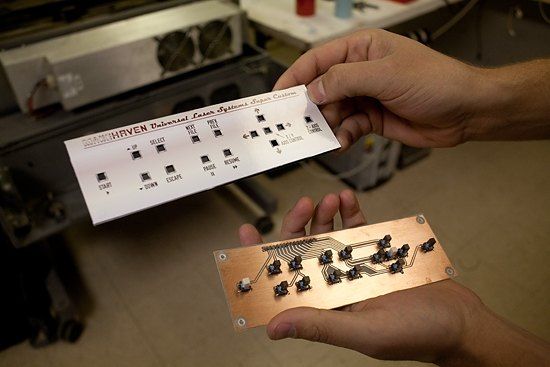 Make Haven is the local manifestation of a greater cultural movement, the rise of the “makers.” Credit: Thomas MacMillan

This is an excerpt from a longer piece that originally ran on the New Haven Independent.

In an old Knights of Columbus social club, a 3-D printer whirred to life. The newly built unit is a fitting first project for a new clubhouse of tech-savvy DIY tinkerers — a machine that can make machines.

The whirring took place behind an unmarked exterior on State Street in New Haven, Conn., in a brick-walled room newly filled with five computers, a variety of work tables and tools, a robotic arm, an old table saw and drill press, and a salvaged laser cutter that’s being nursed back to health after a fire.

The apparatus represents the first stage in the development of a new shared laboratory and shop space called Make Haven. For $50 a month, members have access to all the tools and equipment. More importantly, they get to join a community of like-minded geeks, the kind of guys who grew up pulling things apart to see how they work. That describes John Scrudato, Make Haven’s president, who built a hovercraft while he was in high school — for fun.

Make Haven is the local manifestation of a greater cultural movement, the rise of the “makers.” It’s a subculture formed at the nexus of traditional craftsmanship and modern techno-engineering, combined with a self-starting DIY ethic.

While some crafty people throw their own ceramic bowls on a potter’s wheel, a modern “maker” might plot out a 3-D model of his new dish and “print” it out with a plastic-extruding machine.

Make Haven has emerged in part due to a growing tech industry in New Haven, which has helped create a critical mass of geeky tinkerers. Anne Haynes, director of the local Economic Development Corporation, pulled several of those people together to help birth the new “makerspace.”

On Thursday afternoon, Scrudato offered a tour of the premises and a history of how it came to be.

Scrudato, a 23-year-old from New Jersey, graduated a year ago from Yale. He studied history and mechanical engineering there while his gear-head ways led him to entrepreneurialism.

When his room became uncomfortably warm because of heat from the multiple computers he was running, he put together a liquid cooling system in the shop. That planted the seed for what is now his own startup company, Scaled Liquid Systems.

As graduation neared, Scrudato recalled, he began to worry about the loss of the shop space at Yale, where he’d spent a lot of his undergraduate hours: “I’m going to go into withdrawal after college.” After graduation, he threw himself into his startup and temporarily forgot about the pleasures of having a shop to play in.

Then Haynes got him together with several other like-minded “makers.”

“She got us all in a room,” Scrudata said. He met seven others like himself, the people who became the first members of Make Haven.

The group is now a not-for-profit “with a club-like element,” Scrudato said. The mission is a kind of “evangelism” for “making things.”

It’s catching on. The original group of eight has grown to almost 20.

Make Haven moved into 266 State St. in February. The space was once the Russell Club, a social club associated with the Knights of Columbus, Scrudato said. It’s now owned by Kam Lasater, the chief strategy officer at SeeClickFix and a Make Haven member. He charges the group a subsidized rent that will eventually phase in to market rate, Scrudato said.

The first project: Make the shop itself. The makers have outfitted the place with donated furniture and tools, They’re working on a new sign, using metal etched with acid. But that’s just a placeholder for the real sign, which will be made of thousands of LEDs.

Click here to read the rest of this story.