Can Tacoma Build on a Successful Downtown Revitalization? – Next City

Can Tacoma Build on a Successful Downtown Revitalization? 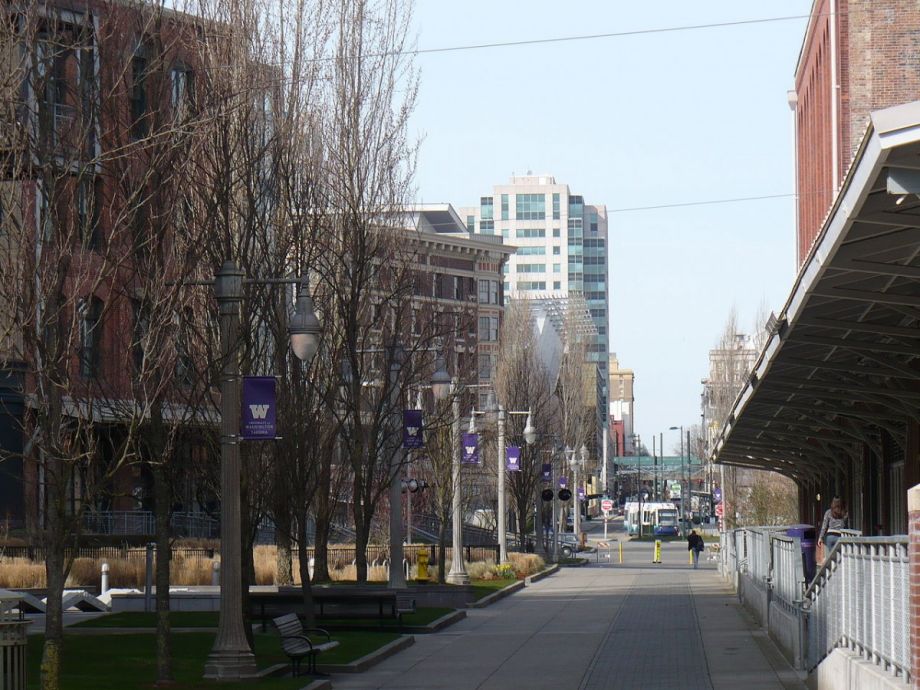 The University of Washington-Tacoma is applauded for its role in the city’s downtown revitalization. (Photo by Broran28)

The University of Washington-Tacoma opened in 1990, and many now point to the branch campus for sparking a downtown transformation. Yet, not all residents have come along for the ride to revitalization. As with many bigger cities, the poverty rate and rising rents are problems in Tacoma. Addressing those concerns will likely require attention to a host of areas — from the minimum wage to affordable housing — at the city and state level.

After the higher ed board’s ’80s plan was announced, Tacoma lobbied for one of the new branches. In the trend of anchor institutions, such as Penn in Philadelphia and the University of Chicago, working actively to change their surrounding neighborhoods, UWT was an early adopter. There was little doubt that Washington’s “City of Destiny” needed the assistance. For decades, the mid-sized city had been the estranged cousin of Bellevue and Seattle (each less than 50 miles away). Blight, crime and vacant lots occupied the post-industrial areas of town. When the Tacoma Mall was built five miles south of the city center in 1965, it drained downtown of many of the retail establishments that were left. By the ’80s, civic leaders were searching for something big to ignite a renaissance. Enter the University of Washington-Tacoma.

“The university has served as the nucleus of the revitalization of downtown,” says Ricardo Noguera, the city’s executive of community and economic development.

“Considering the relative cost of living, Tacoma is the housing bargain of the West Coast,” says Mike Mirra, executive director of the Tacoma Housing Authority. “And yet, it’s still unaffordable to many of its residents.”

Building on a Transformed Downtown

Tackling that out-of-reach housing, along with local wages, could help Tacoma capitalize on the success of UWT and reduce inequality.

For families earning the median household income ($57,740) in the city of 200,000, nearly two-thirds of the home market is within reach, according to Trulia. (That is better than how the middle-class fares in Seattle, where median incomes are higher but housing is more unattainable.) But the problem is that housing for the poorest Tacomans is exceedingly scarce. According to the Urban Institute, the gap between the supply and demand for affordable units available to extremely low-income (ELI) households grew substantially — by 7,000 units — between 2000 and 2013. When the Tacoma Housing Authority opened its waiting list in 2013 for rental-assisted housing, seven times as many people applied than there were slots available.

“What’s happening is Tacoma’s losing the private stock of affordable units,” says Erika Poethig, a fellow at the Urban Institute. “Tacoma is almost entirely dependent on federal rental assistance for meeting the need.”

There are prohibitive forces in play that deter construction of affordable housing stock. A 2010 report commissioned by the City of Tacoma estimated that an additional 14,096 affordable units are needed in order to satisfy its population of rent-burdened low-income residents. But the cost of building has grown throughout the region as a result of Seattle’s boom. And Washington cities can’t use tax-increment financing (TIF) — a tool used in other states to spur new affordable housing developments — because the practice is banned statewide.

Of course, affordable housing can be addressed on the demand side as well, by improving incomes. There’s a high-profile attempt currently underway with the citizen-led 15 Now Tacoma, which is advocating for a $15 minimum wage like what’s been achieved in Seattle, San Francisco and Los Angeles.

Given that household incomes are 30 percent less in Tacoma than Seattle — and its poverty rate is four percentage points higher — the wage hike (up from the current hourly minimum of $9.47) could be a potent force against poverty. The mayor, city council and the Tacoma-Pierce County Chamber of Commerce endorse an increase to $12 per hour by 2018 instead. A ballot initiative in November will decide if the minimum wage is changed, and to what degree. Should both options fail to pass, Tacoma could lobby state legislators for help. The state has yet to fund the Working Families Tax Rebate, a program that pays matching state funds out to those citizens receiving a federal earned-income tax credit. Some people have argued that this would be a more effective strategy to combat poverty than upping the minimum wage.

The fight for equity in Tacoma does not exist apart from UWT, which counts itself as a partner in improving underserved communities. Of its freshmen, 68 percent are the first in their family to attend college and over 70 percent receive financial aid. “Our access mission is our equity mission,” say Mike Wark, director of external relations at UWT. Further, as enrollment has grown from 139 full-time enrolled students to over 4,300, the university has provided a bump in degrees to the regional workforce: More than 80 percent stay in the South Puget Sound region.

Noguera, for one, is optimistic about the city’s prospects of drawing businesses to Tacoma that bring higher-paying jobs for residents: “There’s been a stigma attached to Tacoma, being a blue-collar, port city, because we’ve been in the shadows of Seattle and Bellevue. When you come to downtown Tacoma, you see it has a lot more to offer, with the medical field, a financial district, cyber-security.”