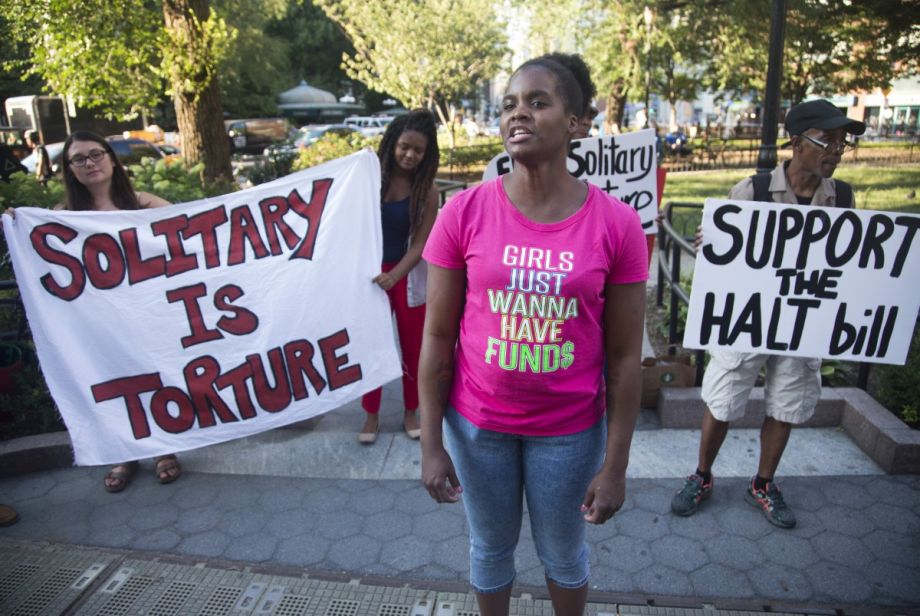 In this Thursday, July 23, 2015 photo, Candie Hailey, center, speaks during a monthly rally calling for the end of solitary confinement, organized by Campaign for Alternatives to Isolated Confinement (CAIC), a coalition of advocates, formerly incarcerated people and their family members in New York. Attending the monthly rally for the first time, Hailey viewed her participation as a step forward as she struggles to break free from the trauma of her confinement before an ultimate not guilty verdict. (AP Photo/Bebeto Matthews)

In 2012, the American Civil Liberties Union launched a class action lawsuit against the Los Angeles County Sheriff’s Department for abuses in the jail system. Reading the 86-page report prompted activist Patrisse Cullors to create a performance art piece that became known as STAINED: An Intimate Portrayal of State Violence.

STAINED grappled with her older brother’s story of abuse in the Los Angeles jail system during the 1990s. After being diagnosed with schizoaffective disorder, he was abused and kept in solitary confinement during incarceration. After leaving prison, he continued to struggle with his health.

“On paper, he’d be considered by law enforcement or judges as a dangerous human being,” says Mark-Anthony Johnson, a board member with grassroots prison abolition organization Dignity and Power Now, which Cullors founded in 2012. “But what the community knows … we know that what he needed, at any given moment, was a support network and access to healthcare.”

Cullors toured STAINED around Los Angeles County, prompting a desire to challenge the county jail system with a focus on health and wellness. Since its founding, Dignity and Power Now has led campaigns to end sheriff violence, launched an arts and wellness collective, formed a rapid response team of healers, and created leadership and reentry programs.

The policy statement not only identifies police violence as a public health matter — it calls for decriminalization measures, divestment from law enforcement and policing alternatives.

“This document gives us a tremendous tool in the toolbox,” says Johnson, who is both an organizer and licensed acupuncturist. “A national public health organization, that works directly with public health providers, has validated a narrative that grassroots organizations and families have been talking about for years.”

In the United States, the intersection of public health and law enforcement has intensified. A 2014 report by the Treatment Advocacy Center noted bluntly that “prisons and jails have become America’s ‘new asylums,’” with ten times more mentally ill people in prison than in state psychiatric hospitals. The Sentencing Project found states with less access to mental healthcare have more adults in the criminal justice system. Prisons often provide inadequate mental health treatment. Inmate mistreatment, abuse and solitary confinement, all issues widely reported on, can either exacerbate or prompt mental health issues.

Another study by the Treatment Advocacy Center found people with untreated mental illness are 16 times more likely to be killed during a police encounter.

The policy statement was a three-year collaboration between public health workers and researchers, organizers and members of communities most affected by law enforcement violence.

Presenting the first draft of the policy to the American Public Health Association, “we weren’t really sure what to expect,” says Liz Kroboth, a co-author of the policy statement.

The draft statement was passed as a one-year interim policy in 2016. “We didn’t initially expect it to pass, because the policy solutions are progressive in nature,” Kroboth says.

“The basis of the statement was to highlight the ways the system of policing is oppressive and rooted in racism and classism,” says Julianna Alson, another co-author. “Each of the solutions not only addressed police violence in a downstream way, but addressed the roots of power and oppression.”

The policy proposes ten solutions that include increased research around the health consequences of law enforcement violence, studying interventions (like decriminalization) that may decrease public reliance on law enforcement, and allocating funding from law enforcement to community-based programs.

“It was critical those solutions remain intact,” says Alson.

The authors of the policy pushed back against more mainstream suggestions from the association, like body cameras and police training. “We didn’t feel like [those suggestions] get at the issue of power and how policing can be oppressive,” says Kroboth.

The dialogue around solutions delayed the official policy adoption to this year. “It took time for these recommendations to be accepted more broadly,” Kroboth says.

The significance of a policy with an abolitionist framework is not lost on organizers working to end the country’s policing and criminal justice systems. “It is solutions-oriented in a way that’s in line with what communities most harmed by policing have demanded for decades,” says Jess Heaney, development director with abolitionist prison organization Critical Resistance.

Back in Los Angeles, Dignity and Power Now is working on a campaign to allocate money from the county’s $3.5 billion jail plan into mental health diversion programs and community resources.

Their work coincides with one policy solution, Johnson notes, of taking funding from law enforcement and directing it to the communities most affected. “Changing the power dynamic is key,” he says. “And this policy statement says: Look, the community knows the answers. Investing in community-based solutions, that’s the answer.”