Surf’s Up, and the Number of Street Children Is Down – Next City

Surf’s Up, and the Number of Street Children Is Down 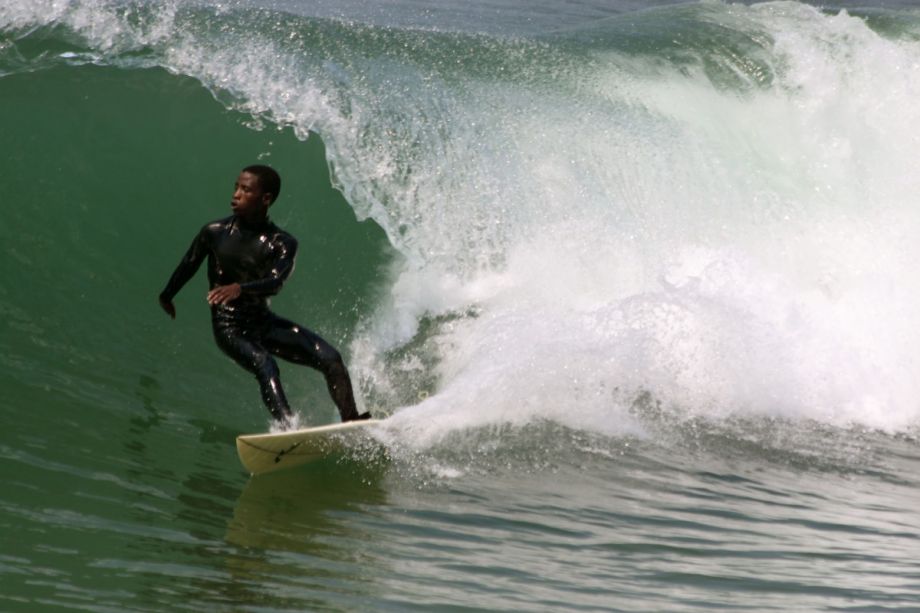 A member of the Surfers Not Street Children program catches a wave in Durban. Photo credit: Greg Arde

Scruffy, ragtag children dodge traffic at a major intersection in Durban. When the street light turns red they either drop to their knees, hands outstretched, or make their pleas more sinister, menacingly eyeing the contents of passing cars. Motorists who aren’t vigilant can become the victim of a smash-and-grab, their mobile phone or handbag disappearing off their car seat in a jiffy.

This vexing problem of children living on the street isn’t new to Durban, but one group’s approach to it is. Up until recently, city authorities would periodically instruct the police to round up the street kids, especially when a big event like the World Cup was in town. Many of these children are AIDS orphans, or the offspring of parents too busy making ends meet to properly take care of them. The round-ups were a brutal exercise carried out by a city that markets itself as a tourist hot spot. But in 2010 the city fathers had a change of heart, says Tom Hewitt, a Brit who has worked with street children in South Africa for over 20 years.

Hewitt founded Umthombo, an NGO that assists street children. His work in the field has earned him an MBE from Her Royal Highness Queen Elizabeth II. He says that when the World Cup came to South Africa in 2010, it coincided with Durban’s realization that it couldn’t hide its street children problem any longer, nor fix it with brute force. Though no new official policy was enacted, the city scaled down its roundups and instead began working with organizations like Umthombo, a shift advocates say has helped reduce the number of street children.

Hewitt came to South Africa as an anti-apartheid activist and fell in love with its people and its ocean. Initially his efforts were concentrated on Umthombo, through which he counseled street children, fed them and acted as a liaison between the kids and the welfare department. But one day, while Hewitt was out surfing Durban’s famous waves, a street child watching him from a nearby pier couldn’t contain himself – and dove into the water to demand a ride on Hewitt’s board.

Hewitt observed the delighted child belly-board to shore, sprint across the beach and race down the pier for another wave. It then occurred to him that, were the kid not surfing, he might be out there with the other street children accosting drivers.

“Surfing is a high-intensity adrenalin rush and the kids feed off it,” he says.

Hewitt says the streets might be tough, but they’re also exciting. Add the lure of drugs and children don’t leave that life too easily. They need an alternative rush, something they can’t resist. At the end of a day in the water, says Hewitt, the children are too tired for drugs or crime. It’s not a cure all by any means, he admits. “Surfing isn’t the model — it fits the model.”

Hewitt has won wide acclaim for the simplicity of the surfing program and the fact that it has taken root so naturally in Durban. The program has become so successful that he recently handed over Umthombo to a successor and has started a new NGO called Surfers Not Street Children. It involves a core of five young men who Hewitt rescued from the streets while at Umthombo. They’ve become noted surfers and, when not working as lifeguards or surf-apparel salesmen, they’re teaching neglected children to surf.

“They’ve turned the myths about street children upside down,” he says. “They aren’t criminals or drug addicts who are the architects of their own misery. They’re ripped, muscular, successful young men, and when they walk down the streets in their poor neighborhoods they have respect.”

Lucky Nozisali is one of these young men. The 24-year-old is one of Hewitt’s charismatic protégés. His parents were killed in a car accident when he was eight, and his grown-up sister couldn’t look after him because she had three children of her own. So Lucky lived around Addington Beach for years, taking drugs and bag snatching, until Hewitt taught him to surf.