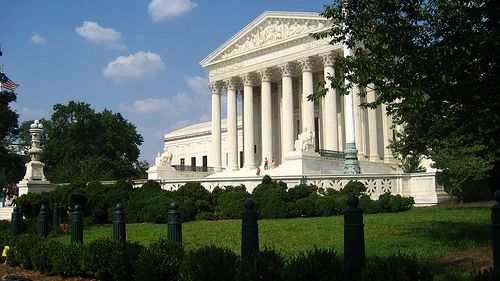 A pending Supreme Court case could potentially overrule Chicago’s citywide handgun ban some time this summer – the season already notorious for increased violent crime rates nationwide. Chicago eagerly awaits a ruling on the McDonald v. Chicago Supreme Court case, which challenges the city’s 28-year-old handgun ban. Chicago has found itself at the epicenter of this controversial case, which pits the Second Amendment against the city’s attempt to control gun-related violence. In this case, first presented before the Court in March, Otis McDonald, along with the Second Amendment Foundation and Illinois State Rifle Association, challenges the ban.

The already controversial case became increasingly racy when, at a news conference this May, Chicago Mayor Richard M. Daley was asked how effective the handgun ban has been. Daley, who strongly supports the ban, suggested he show the reporter how effective it is by sticking a rifle with a bayonet — a weapon confiscated by the Chicago police – up a reporter’s “butt.” The comment once again thrust the case into the media. Now Daley hopes the case will receive attention for its significance rather than his aside. With respect to Daley’s wishes, Next American City takes a look at the issue.

Major gun-control efforts by the City of Chicago began in the 1960’s when then Mayor Richard J. Daley, outraged by major outbreaks of violence and the assassinations of President Kennedy and Martin Luther King Jr., pushed for the registration of all guns in the city. In 1982, Mayor Jane Byrne took gun regulation a step further, banning the sale and registration of handguns, thus instituting the first citywide handgun ban in the United States.

Despite the ban, Chicago, like most major U.S. cities, still struggles with gun violence. Otis McDonald’s story attests to the continued violence in Chicago. McDonald, 76, watched his neighborhood on the far South Side of Chicago deteriorate as, he says, gangs and drug dealers took over. McDonald took measures to protect himself and his wife, like installing burglar alarms with a direct line to the police. Still unsatisfied with his safety, McDonald began supporting looser gun laws, which would allow him to keep a handgun as self defense. He made connections with gun rights activists at an Illinois State Rifle Association rally, and when in 2008 lawyer Alan Gura was looking for Chicago residents to challenge the city’s handgun ban, McDonald eagerly volunteered.

Chicago’s crime statistics suggest that McDonald’s fears are not unfounded. In 2008, the city experienced 1,163 burglaries and incidents of aggressive assaults. The homicide rate stood at approximately 18 homicides per 100,000 citizens – up from 15.6 in 2005. These statistics show a noticeable decrease in murders; in 1992 the murder rate was reportedly 30.3 per 100,000. While 75 percent of the murders reported in 2005 involved a firearm, the extent of the handgun regulation’s role in decreasing the murder rate is unclear.

In 2008, the Supreme Court overruled a similar handgun ban in Washington D.C. In the case of District of Columbia v. Heller the Court deemed unconstitutional the Firearms Control Regulations Act of 1975, which banned people from owning handguns, automatic firearms and semi-automatic firearms in the District of Columbia. This was the first time the Supreme Court ruled that the Second Amendment protects an individual’s right to “keep and bear arms” and is not limited to militia groups. Because D.C. is not part of a state, the decision did not make it clear whether or not this ruling is applicable to cities and states in addition to federal enclaves. If the Supreme Court votes in favor of McDonald and his team, the ruling of McDonald v. Chicago may be used to overturn existing handgun bans nationwide.

Mayor Daley expressed his optimism and continued hopes that the Court will vote in favor of the city. If the law is overturned, Daley will continue to uphold strict handgun regulation and implement policies such as required gun insurance and firearm training courses. He pledges to continue challenging handgun sources and uphold Illinois’ recently enhanced statewide gun control laws.