Super Bowl 50: A Bad Deal for San Francisco? – Next City 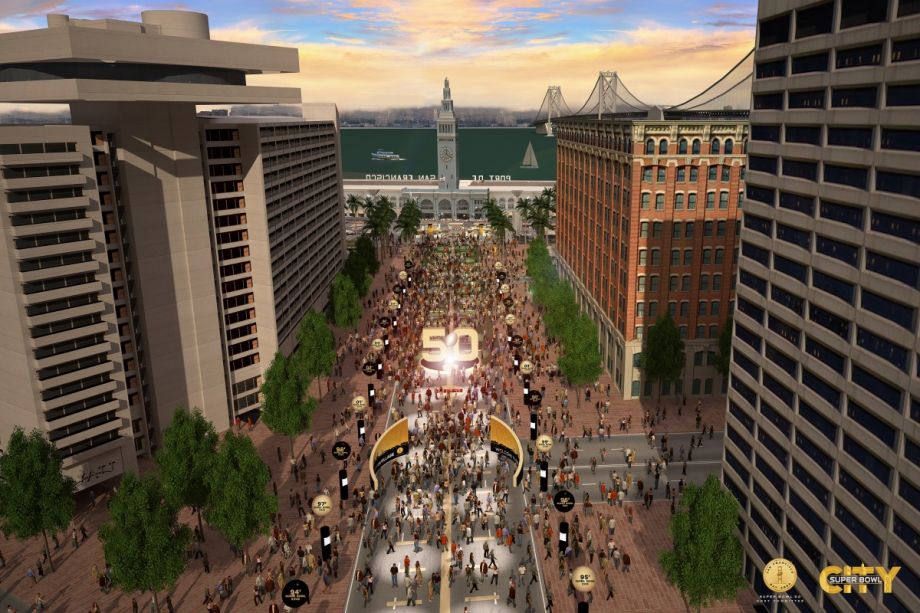 Some San Francisco officials are starting to think Super Bowl 50 will be a bad deal for their city.

While the big NFL event will happen at Levi’s Stadium in Santa Clara about 45 miles to the south, the city of San Francisco will host a nine-day celebration leading up to game day on Feb. 7. And while the Super Bowl 50 Host Committee will reimburse Santa Clara for the cost of additional city services like transportation, fire, public safety and emergency medicine, in San Francisco those expenses will come out of city coffers.

Santa Clara has legislation in place that specifically prevents general fund money from being used on activities related to the Levi’s Stadium. As part of the bid to host the Super Bowl in the Bay Area, the Host Committee has promised to reimburse Santa Clara for additional city services estimated to exceed $3.5 million.

In San Francisco, cost estimates keep rising. Last month, Mayor Ed Lee, who has defended the expense to the city by claiming revenues from Super Bowl-related events will more than justify the cost, estimated $4 million in additional spending for city departments.

However, as one Next City writer pointed out a few years ago in “The Super Bowl Is a Mixed Economic Bag,” the true worth of the annual NFL game can be tough to pin down.

Many S.F. city officials are not pleased with the deal, and even appear to have been blindsided by it.

According to Rose’s budget report, city staff interviewed about the Super Bowl 50 deal believed that municipal services would be covered by the Host Committee, but “none had reviewed the bid document or were able to furnish to the Budget and Legislative Analyst with such a bid document.”

“The city got a real bad deal,” Supervisor John Avalos told the Examiner. “It is a huge subsidy for the NFL. Santa Clara got a good deal. They were smart … . We should get reimbursed by the NFL. It looks like the NFL was given a pass or the mayor’s office failed miserably in negotiating a good deal.” (Talk of the NFL and subsidies already reached a crescendo this month when the Rams’ owner announced the team is leaving St. Louis — and a still-not-paid-off stadium — for Los Angeles.)

Supervisor Jane Kim has also framed the situation as unfair to taxpayers, and overly solicitous to the NFL. She said in a statement, “I’ve said it from the beginning and this report confirms my fears: Taxpayers are being sacked to pay for a party for billionaires and special interests. The NFL is a multibillion-dollar corporation and can pay for its own marketing and should absolutely reimburse San Franciscans for every single cent.”

The mayor’s office, however, has not committed to renegotiations. His spokesperson said that reimbursement from the NFL won’t be necessary, telling ABC7 News, “We are very confident that the revenue generated from all the tourism activity coming to San Francisco because of the Super Bowl, that we’ll be able to pay for those city services.”

In an email to the Examiner, the mayor’s rep noted that the city often eats the cost of additional services for special events, trusting that revenues will exceed expenses. “We do this for all kinds of events, from Fleet Week, to Pride Parade to Chinese New Year.”

Super Bowl 50 has inspired one certain investment that’s set to help Bay Area kids. The NFL Foundation and the 50 Fund, set up by the Super Bowl 50 Host Committee, worked with the community park experts at nonprofit KaBOOM! to create the “Play 60, Play On” grant program. Last month, they awarded $750,000 to 21 Bay Area cities, nonprofit organizations, businesses and individuals who will use the money to turn underutilized or empty public spaces in underserved communities into playable areas. Projects getting funding include everything from colorful sidewalk signage that guides a “fit path,” to placing interactive design installations in a downtown Oakland plaza.