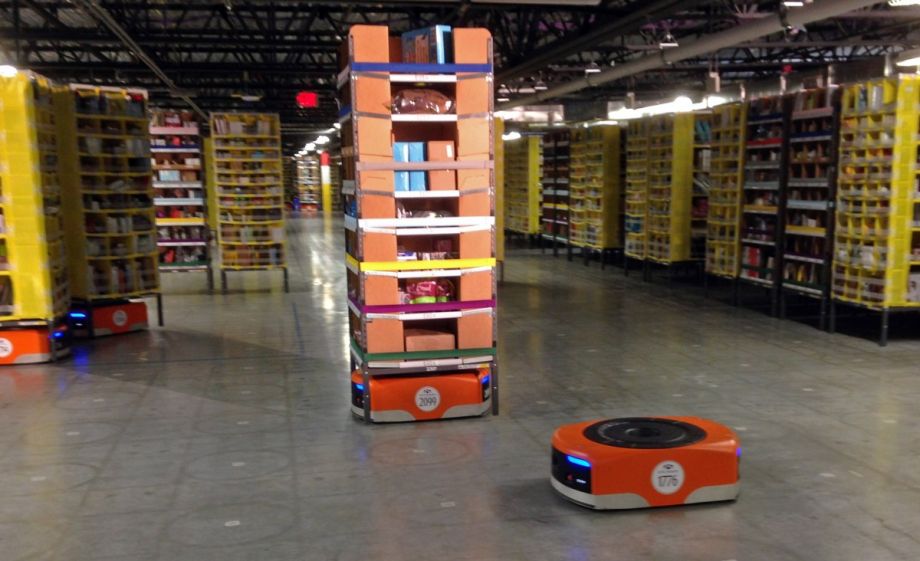 A Kiva robot drive unit is seen, foreground, before it moves under a stack of merchandise pods, seen on a tour of one of Amazon's distribution centers in Tracy, Calif. This Amazon Fulfillment Center opened in 2013 and was refitted to use new robot technology in the summer of 2014. (AP Photo/Brandon Bailey)

Academic scholars get a lot of flak for being wordy and opaque. But look at this: “Economic development incentives, on average, fail to produce new employment opportunities.”

That’s from the second page of a working paper released this month by the W.E. Upjohn Institute for Employment Research. The paper, called “Striking a Balance: A National Assessment of Economic Development Incentives,” was written by Mary Donegan, an assistant professor-in-residence in the Department of Community and Urban Studies at the University of Connecticut, along with T. William Lester and Nichola Lowe, both associate professors of city and regional planning at The University of North Carolina at Chapel Hill.

The paper is still being peer-reviewed for publication in a journal that the authors say they can’t disclose yet. But the authors say it’s among the first studies of economic development incentives nationwide that looks at the cause-and-effect relationship between incentives and job growth. The paper compares employment changes at firms that have received incentives from state governments to unsubsidized firms of similar size, age, and industry. It finds that, in the case of small firms, incentives can have some positive impacts on job growth. But in the case of large firms, incentives actually correspond to reductions in overall employment. The paper adds to a growing body of scholarship that undercuts the basic premises of much economic development incentive policy.

“By comparing incentivized establishments to a carefully selected control group, we cast doubt on the biggest claim made by incentive proponents that ‘but for’ the incentive payment, job creation would not occur,” the authors write in the introduction. “This simple but direct finding — that incentives do not create jobs — should prove critical to policymakers. However, we also show how incentives can be more effective by examining the disparate impacts by firm size.”

The study leans on three national databases: the Subsidy Tracker of national incentives maintained by Good Jobs First; the National Establishment Time-Series (NETS) Database, which tracks sales and employment figures for many businesses in the U.S.; and the State Economic Development Expenditure Database from the Council for Community and Economic Research. The research builds on a previous paper that Lester and Lowe co-authored that was focused on incentives in North Carolina.

“There has been a lot of research on incentives, and there’s also been a lot of public discussion around incentives,” says Lester. “Oftentimes, critics charge that incentives are just corporate welfare, but a lot of the research that’s gone on up until now has been focused on one state, or focused on certain deals. There hasn’t been a comprehensive national look at the effectiveness of incentives.”

As far as findings, the research shows that on the whole, incentives have a slightly negative impact on job growth compared to firms that don’t receive incentives. However, the greatest negative impact is found in the largest firms (more than 1,000 employees), with some positive impact on job growth for smaller firms. The authors say these results could suggest that larger firms seek and receive incentives during periods when business is contracting overall, or that they may simply be more likely to “play the incentive game” whether they’re growing or not.

However, in states that “balance” their economic development incentive strategy between trying to attract outside firms and investing in small homegrown ones, the paper shows, the negative impact of incentives disappears, and incentivized firms perform on par with non-incentivized ones. “One possibility may be that states with more balanced economic development budgets employ more careful selection criteria when evaluating potential large firm deals, and as a result, pick only the more promising deals among multiple options to incentivize,” the report says.

Greg Leroy, the executive director of Good Jobs First, says the conclusions of the study are not that surprising. Good Jobs First released a study in 2015 showing that big businesses earned most of the incentives from states’ economic development budgets. Another study the following year showed that 68 percent of economic development spending in Florida, Missouri, and New Mexico went to large firms.

“Despite the fact that state elected officials mouth lots of platitudes about small businesses and mom and apple pie, they don’t really put their money where their mouth is,” Leroy says.

Leroy says that Good Jobs First has heard from dozens of researchers using Subsidy Tracker for various studies. But those haven’t always come to fruition, or they’re still in the academic publishing pipeline. Mary Donegan, one of the study’s co-authors, says there’s always a need for better and cleaner data — a lot of the deals were linked to states, but not necessarily counties or cities within states, for example — but that the Good Jobs First database is the best source available.

In the conclusion, the authors write that if policymakers start redirecting more of their economic development budgets to smaller firms, they should do so with an eye to extracting benefits in terms of job quality like better pay and working conditions. And the risk of wasting money outright is higher with larger firms.

“The big takeaway,” says Lester, “is that by and large, incentives don’t seem to be that effective.”