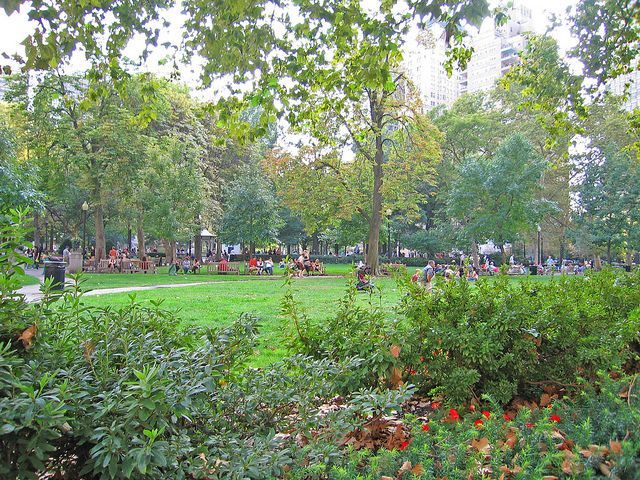 In his upcoming Forefront story on the Bloomingdale Trail, the High Line and what these elevated spaces mean for the future of urban parks, writer David Lepeska notes an interesting observation that Jane Jacobs made back in the early 1960s.

“Parks are volatile places,” Jacobs wrote in her oft-cited polemic, The Death and Life of Great American Cities. “They can be delightful features of city districts, and economic assets to their surroundings as well, but pitifully few are. They can grow more beloved and valuable with the years, but pitifully few show this staying power… There are dozens of dispirited city vacuums called parks, eaten around with decay, little used, unloved.”

These are harsh words for assets that many urban dwellers in the 21st century consider the best of what their cities have to offer. But by the mid-20th century, public green space had fallen low on many municipal agendas as planners, Lepeska writes, “soon gravitated toward the Frank Lloyd Wright ideal of suburban lots with backyards and cities designed around highways and the movement of traffic.” This, compounded with tight budgets in later decades, led to frequent instances of bad park maintenance, hence the “volatile” label.

More than 50 years later, the scientific community has come up with further evidence to support Jacobs’ notion that upkeep is essential for good urban green space. In a study published last winter in the journal Landscape and Urban Planning, two Temple University researchers find that urban vegetation, long thought to enable crime, in fact helps to deter it — so long as the vegetation is well maintained.

Looking at different neighborhoods across Philadelphia, Jeremy Mennis and Mary Wolfe challenge the idea that shrubs and trees, because of the cover and shade they give, encourage criminal behavior. Using satellite imagery and controlling for other factors associated with crime rates (poverty levels, density, educational attainment), they find that clean spaces with cared-for vegetation allow for a sense of “social control,” which brings more foot traffic and surveillance, which in turn discourages crime.

Conversely, garbage and overgrown vegetation implies a lack of social control, which can lead to desolate spaces where crime can fester.

The findings carry echoes of Jacobs’ “eyes on the street” theory. As Mennis and Wolfe write:

We speculate that an abundance of unmanaged vegetation in abandoned lots and unkempt properties would encourage crime because it is a clear marker of a lack of social control over the environment. Here, the lack of maintenance over the environment can be seen as a signal that there is little or no surveillance over an area, that there is little or no social authority exerting control over an area, and that consequently deviant behavior may be tolerated. Conversely, well-maintained vegetation sends the opposite signal — that there is a clear indication of social control.

Of course, factors like a neighborhood’s income and education levels still play a role here, even as Mennis and Wolfe control for them in their data sets. Where are you more likely to find well-maintained parks versus overgrown lots? There’s a reason that Rittenhouse Square, one of the few parks that made Jacobs swoon, lies in a tony part of Center City Philadelphia and not, say, North Central Philly. “[E]ven if vegetation does indeed suppress crime,” the researchers write, “it is also possible that crime is merely displaced to other neighborhoods with less vegetation.”

What it may come down to, then, is not whether neighborhoods should have green space, but how resources are allocated to make sure green space is well maintained across the city. Neighborhoods with money (or with the benefit of players such as the community development corporation Center City District) have a greater ability to keep up their public space, green and otherwise. If Philly wishes to lower its crime rate — which actually rose between 2010 and 2012 — one part of the equation might be to make sure that the area around Reyburn Park looks as good as that around Rittenhouse.