Big Cities Are High-Speed Rail’s Biggest Winners, Smaller Cities Maybe Not So Much – Next City

Big Cities Are High-Speed Rail’s Biggest Winners, Smaller Cities Maybe Not So Much 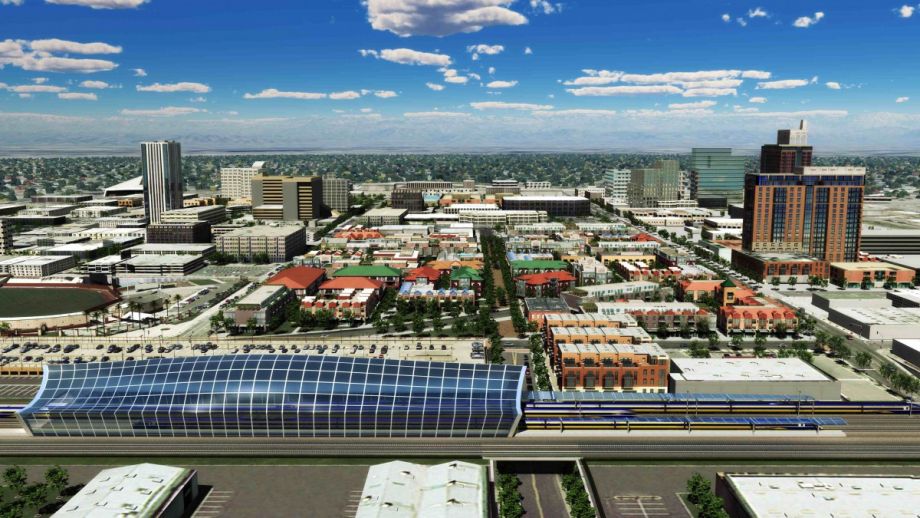 Public opinion may have turned against California’s high-speed rail plans — a recent survey found that a bare majority of Californians now oppose the project, which has been buffeted by delays and cost increases — but a number of cities throughout the state still support it. For places like Fresno, San Jose and Palmdale, high-speed rail is still seen as an economic lifeline.

Construction of the line would bring immediate job gains to, for example, Fresno, where the first segment is planned to break ground soon, assuming a judge’s recent ruling doesn’t throw it off. But will it bring lasting economic growth?

Last month a group of California researchers released a meta-study in the journal Transport Reviews, reviewing the literature on the effects of high-speed rail. The answer is… definitely maybe. Two things, though, are clear: The benefits will likely not be as large as predicted, and big, tier-one cities will benefit the most.

“Predictive studies are largely optimistic of the rail’s positive effects,” the authors write. “On the other hand, observational studies” — those done after high-speed lines have opened — “tend to identify both benefits and shortfalls.” The largest benefits, various studies found, accrue to big cities. In California, this means San Francisco and Los Angeles.

“The centralizing effect of HSR is now a well established impact,” wrote one set of researchers reviewing studies of lines built in Europe.

While there is some evidence to the contrary, and while non-central cities with HSR appear to have fared better economically than those without it, the scholarship that exists to date suggests that most growth and economic benefits from HSR accrue to the first-tier cities of the network, where firms are better positioned to expand their reach in secondary markets and smaller cities. For this reason, scholars have argued that HSR facilitates the territorial polarization between first- and second-tier cities.

Others looking at the effects of Japan’s Shinkansen found that the country’s two most important cities, Tokyo and Osaka, gained in economic primacy, at the expense of other cities with stations along the high-speed corridor. Japanese cities without high-speed rail connections were the biggest losers, another set of researchers found.

A third set of researchers, though, found that the Shinkansen’s effects were muted, finding “only a negligible impact on development in Japanese cities that had been well served by rail prior to Shinkansen.” (This isn’t quite relevant to California, where there are no strong existing rail links. It may mean that any potential high-speed rail project on the Northeast Corridor, where rail already serves cities like New York and Washington, may have minimal impacts.)

The success of high-speed rail in inducing development and job growth in second-tier cities is mixed, but the studies point to a number of things that cities can do to maximize growth potential. One survey of high-speed rail experts found that, “the most important preconditions for station-area development include central station location, good integration of the station with its surroundings, station connectivity, good level of service, and strong political will and vision.”

Fresno fulfills some of these criteria. The station will be downtown — much to the chagrin of some project critics, who argue that serving the downtowns of small cities adds costs out of proportion with their benefits — and there appears to be strong political will and vision in promoting development around the station.

Fresno does not, however, have good “station connectivity,“ or even much mass transit at all. It’s not clear how many trains a day will stop at the station, as opposed to speeding past on more profitable express runs. (This also raises another question, which past experience cannot answer: To what extent with the booming sound of passing trains, zipping through town at unprecedented speeds for a developed urban area, discourage people from locating near the station?)

One study “emphasize[d] the importance of coordinating land use around stations through densification.” This could bode well for a city like San Jose, which despite its largely suburban population does have an established downtown core to densify, but may pose problems for cities like Fresno in the Central Valley, which has no post-war history of densification, and may be irredeemably auto-oriented.

The full meta-study is available for free, ungated, at the publisher’s website.