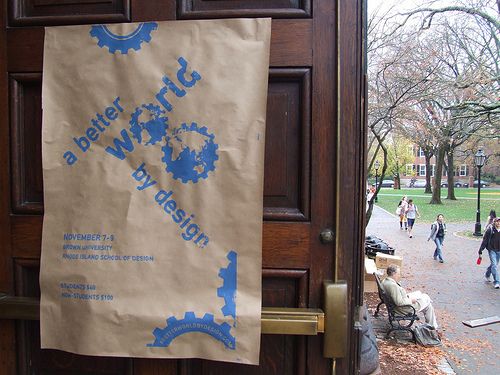 A Better World By Design Conference

For the past three years, a group of around 25 students from Brown University and Rhode Island School of Design (RISD) have joined forces to organize A Better World by Design Conference, a now internationally recognized, three-day conference drawing over 500 students, individuals and professionals from around the world together to foster a community of socially conscious, passionate innovators with the power to create positive change. This year the conference hosts the Better World Challenge, a competition prompting participants to solve the problem of food deserts in Providence, R.I., in a way that can be replicated in communities around the world. This week Next American City spoke with Lily Mathews, a conference committee member and public relations coordinator, about the Better World Challenge.

Why did you choose to target food deserts specifically?
It came down to two things. First, the committee felt it was very important to choose a problem that had both local and global relevance. In Providence, food deserts are areas where whole neighborhoods have little or no access to fresh, nutritious, and affordable food. However, hunger and food insecurity are issues in many places all over the world.

The second reason we chose food deserts was because it offered participants (the opportunity) to take design in many directions– you could sketch up blueprints, you could create a business plan, you could even draft policy if that was your thing. Like the conference, the competition aims to create a more holistic definition of design.

As college students in Rhode Island, what exposure do you have to local food deserts?
Many students work with local organizations – some partner with urban gardening groups, while others campaign to get healthier snacks into corner stores. So many amazing organizations here in Providence work on related initiatives but are ultimately strapped for resources and time. We’re not trying to usurp these groups’ authority, but rather are working within the framework they’ve already created.

A Better World by Design Conference is in its third year, but 2010 is the first year it will host the Better World Challenge. What prompted you to incorporate the challenge?
While we’ve received some great feedback in the past, the committee wanted to create even more tangible change this year. We’re moving away from the typical conference experience with a jam-packed speaker schedule and creating more opportunities for people to meet up, create partnerships, and launch new ideas. With the challenge, we’re providing students a platform in Providence to make that happen.

How will the challenge benefit the conference?
With the challenge, the conference becomes an agent of change. Every year for three days an astounding amount of brain and creative power converges on the Brown and RISD campuses. By implementing the Better World Challenge winning design, we’re extending that experience through the rest of the year.

What do you hope to see as a result of the Better World Challenge?
Even though we’re looking for a submission to implement in Providence, we’re also awarding another competition winner for most effective overall design. With this in mind, we hope the challenge will serve as a tool for students around the world to stretch their creativity and skills, create new partnerships, and think critically about what it means to harness their own skills to not only talk about change, but to actually create it.

A Better World by Design Conference takes place October 1-3. Registration for the conference opens August 1. Submissions to the Better World Challenge will be accepted until August 31. Complete information is available at http://www.abetterworldbydesign.com/.