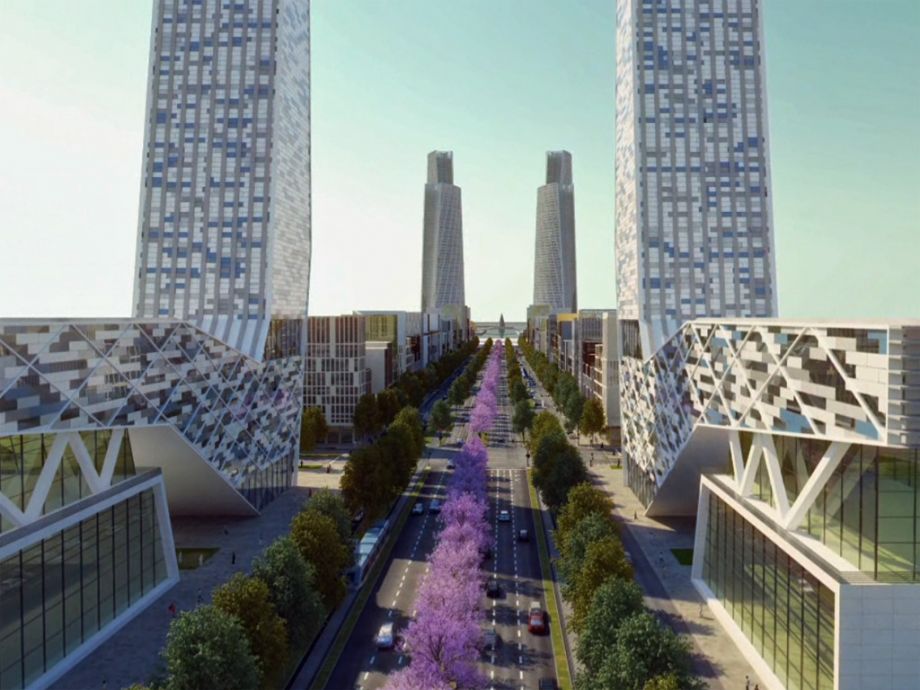 The new city of Lusail is slated to play a major role in Qatar’s hosting of the 2022 World Cup. (Photo: Lusail.com)

Plans for New Australian Subway Tunnel “Written on the Back of a Beer Coaster”?
The Aussies who gave us that catchy safety video “Dumb Ways to Die” appear to be hard at work on a sequel. Working title: “Dumb Ways to Plan?”

That’s what some critics are calling the Victoria state government’s recent decision to abandon a subway tunnel project for central Melbourne in favor of an alignment that would serve a huge new planned suburb on the downtown fringe. (In Australia, a “suburb” is any community, regardless of form, outside the central business district.)

The latter, called Melbourne Rail Link, was included in the budget released last month by state Premier Denis Napthine’s Liberal-led coalition government, replacing the Melbourne Metro downtown tunnel that had been in the works for five years and would have had five new underground stations in the CBD.

The tunnel now being promoted by the government would begin at Southern Cross station on the existing City Circle subway and head south through the site of Fishermans Bend, a planned new business/residential community on former industrial land south of the Yarra River, before turning east to South Yarra.

The Napthine government says the tunnel they’re now promoting (at a cost of A$11 billion or US$10.34 billion) would avoid years of disruption on Swanston Street, provide a rail link to Melbourne Airport, and serve Australia’s largest urban renewal project. Critics, including Martin Foley, the Labor Party MP for the Fishermans Bend area, point out that a proposed Fishermans Bend station would be a good distance from the development’s center.

Foley told The Age that planning for the entire Fishermans Bend development was “a shambles” and that the government was “making things up as they go along” on the new subway tunnel.

“This plan has been written on the back of a beer coaster. Dotted lines on a press release map don’t equal a proper cost-benefit analysis,” he went on. “No business case. No technical study. No economic impact. [They are] pushing the date out well beyond 10 years to appear they are doing something.”

Melbourne Lord Mayor Robert Doyle, a member of Napthine’s party, also criticized the shift, calling it a worse result for the city than the tunnel through downtown. That project was begun by the previous Labor government and continued under Napthine — until now.

However, there’s a chance that it could come back from the dead: A poll conducted by The Age and Nielsen shows Labor leading Napthine’s coalition by a 59-41 percent margin going into the November state election.

Heritage Streetcar Service for El Paso
The last international streetcar line in North America, which joined the cities of El Paso, Texas, and Ciudad Juarez, Chihuahua, Mexico, ceased operations in 1974. The PCC trolleys El Paso City Lines used to operate the service have been rusting on the grounds of El Paso’s airport ever since. At least one of them will get a new lease on life as part of a new heritage streetcar line that has just won funding from the Texas Department of Transportation.

The new heritage streetcar service will use mostly replica streetcars and connect downtown El Paso with the University of Texas at El Paso campus via Stanton and Oregon streets, which are both one block away from Mesa Street, the crowded main thoroughfare of the city’s West Side. The route’s southern end would be close to the Good Neighbor International Bridge, known locally as the Stanton Street Bridge, across which the international trolley line ran. The city received $97 million for the project from the TTC.

The El Paso Times reported before the TTC voted on its funding package that the heritage streetcar project enjoys widespread support among El Paso’s business and political leaders, most of whom see it as a tool to stimulate further development along its route. El Paso Mayor Oscar Lesser, for instance, wrote the commission a letter in support of the project that said, “The El Paso community, both public and private sectors, has shown their investment through millions of dollars in projects to help enhance the quality of space for our citizens. The trolley project would significantly enhance efforts to increase the quality of life for our community, and I respectfully urge the commission to proceed with this initiative.”

With the $97 million in hand, the city expects to begin work on the streetcar line in August and complete the project in three years.

New Light Rail Network in Qatar Will Move World Cup Fans
Flush with natural gas revenues, the emirate of Qatar on the Arabian peninsula has been on a pell-mell rush to urbanize and modernize since the mid-1990s. Its capital, Doha, has been transformed from a fishing village into an international financial center, and the government, through its sovereign wealth fund, has embarked on an ambitious development project aimed at creating a new “green” city north of the capital.

Begun in 2005 and planned to house a population of 450,000 when completed, Lusail is the first major development project undertaken by the Qatari Diar Real Estate Company, a firm backed by the sovereign wealth fund of the state of Qatar. Like much of what’s being built in Qatar, Lusail aims to project an image of modernity and sophistication in its architecture and design. Its promoter, Qatari Diar subsidiary Lusail Real Estate Development Company, also says the city will play a major role in hosting the world when Qatar hosts the 2022 World Cup.

The four-line Lusail light rail network will be ready to take those soccer fans where they want to go by then. According to a report in the Railway Gazette, Qatar Rail Company has signed a 2 billion euro contract with a consortium led by Alstom and QDVC to build a 37-km, 37-station system, 7 km and eight stations of which will be underground. The system’s Yellow Line will be the first to open, in 2018, with the other three lines — Green, Red and Purple — opening in 2020. The system will connect with both the Doha metro and the national rail network.

Alstom will receive 450 million euros to build its portion of the system, including the tracks, power supply, catenary, signaling and 35 Citadis low-floor trams. The balance of the work will be carried out by QDVC, a joint venture of Qatari Diar and Vinci Construction Grands Projets. QVDC has already done some work on the subway portion of the system and preliminary work on the depot for the trams.