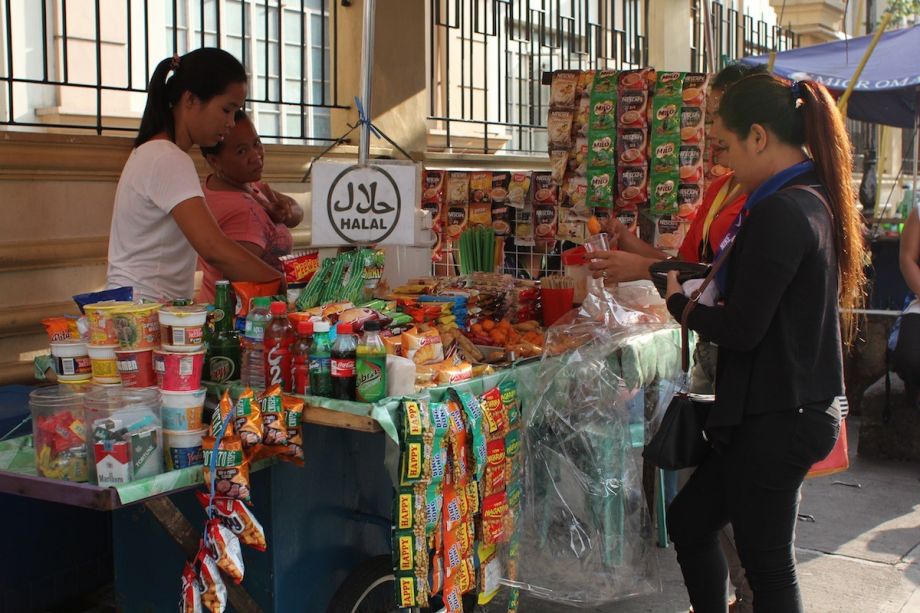 Annabel and Marilou Francisco sell packaged goods and halal snacks from a table across the street from an Arabic language school in Intramuros. (Photo credit Aurora Almendral.)

Every morning at 4 a.m. Romeo Mendoza goes to the central market, loads up his bicycle pedicab with several dozen coconuts, and pedals back to Intramuros, the four-century-old Spanish colonial city at the heart of Manila.

The thick fortress walls, cobbled streets and cloistered gardens of Intramuros are tourist attractions, but Intramuros is a living city in a historical site with bustling crowds, living room grocery stores, small table-top shops and even smaller lunchtime food stalls. In Intramuros, as with the rest of the Philippines, small shops are the linchpins of Philippine street life — they’re gathering areas for the community, where people exchange news and gossip or just pass the time, for hours on end.

Every weekday for nine years, Mendoza, who sells coconut water straight out of fresh coconuts, has set up his rolling wooden cart and narrow bench on a sunny corner across from the tall office building of a shipping company. His customers are mostly office workers and merchant sailors, who wander over for a refreshing drink after spending the day in training, or running administrative errands.

Mendoza used to sell coconuts in a bustling commercial area outside Intramuros. Despite heavy foot traffic from the nearby metro station and a small shopping center, Mendoza was happy to move away to the cobblestoned market.

He made more money at his old location, but he also spent more — on bribes to crime syndicates, and to the police who, if they weren’t paid, would run him and the other vendors off the road.

In Intramuros, he doesn’t have to worry about that. “Sometimes [local officials] come by and ask for a little money for their merienda (afternoon snack), but that’s not really a problem.” With his stable customer base and money saved from not having to pay regular bribes, Mendoza says he earns enough, about 500–800 pesos, between $11 and $17, a day in profit.

In a city like Manila, where even the cheapest fast food meals can feel like a splurge for many office workers, informal stalls with minimal overhead and cheap wares, like Mendoza’s, fill a need and help the city run more efficiently. Yet as much as Manila may need its vendors, it often doesn’t treat them well at all, imposing burdensome regulations and limiting how they use the public space that is their marketplace. Through years selling on streets and in alleys, the city’s community of vendors has become savvy about how to navigate these spaces — and how to enliven them. What can their experiences teach us about how to design public spaces to be used? 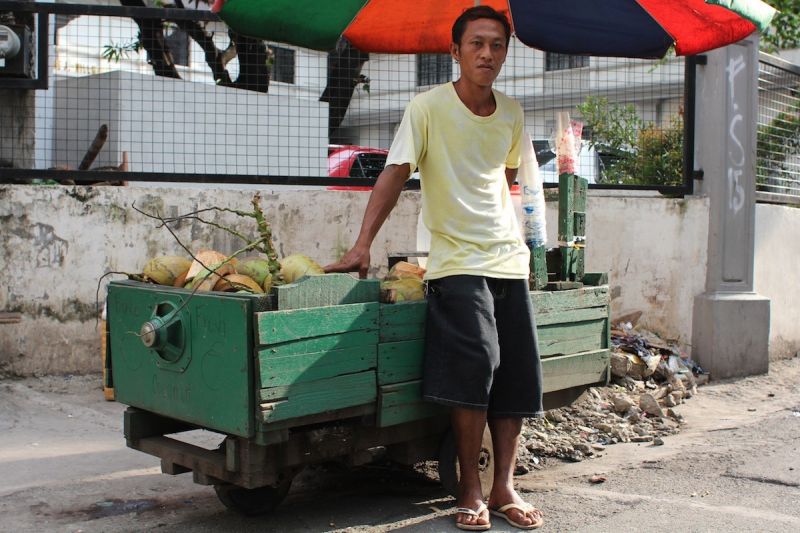 Romeo Mendoza sells fresh coconut water from a cart on a street corner in the Intramuros, Manila’s walled city. (Almendral)

Mendoza says cleanliness is important to his business — he sweeps his patch of sidewalk several times a day, but even more important is stability: “Most of my customers are regulars,” says Mendoza, “they know I don’t sell rotten coconuts.”

Across Intramuros, Annabel Francisco cheerily calls out to a woman leaving the building across the street, “Come over and have something to eat!” Two others linger at the food stall eating halal snacks — fish balls, chicken skin, sautéed bean sprouts — that her sister Marilou cooks at home in the morning. The Franciscos’ stall is a table five feet wide fitted with a colorful beach umbrella, situated across from an Arabic-language school for Filipino workers bound for the Middle East.

The Franciscos’ stall exists in the same legal permit grey area as Mendoza’s coconut cart, but they’ve held the spot for 15 years.

Location is paramount and stability helps her business, but Francisco dreams of a bigger umbrella for shade, some chairs and a permit to cook food right at the stall. Intramuros regulations limit the size of the umbrella she can put up, and people won’t hang out under the hot sun without something to stand under. Francisco sells bags of chips and cold sodas, but cooked food is not just more popular, it’s also more profitable. 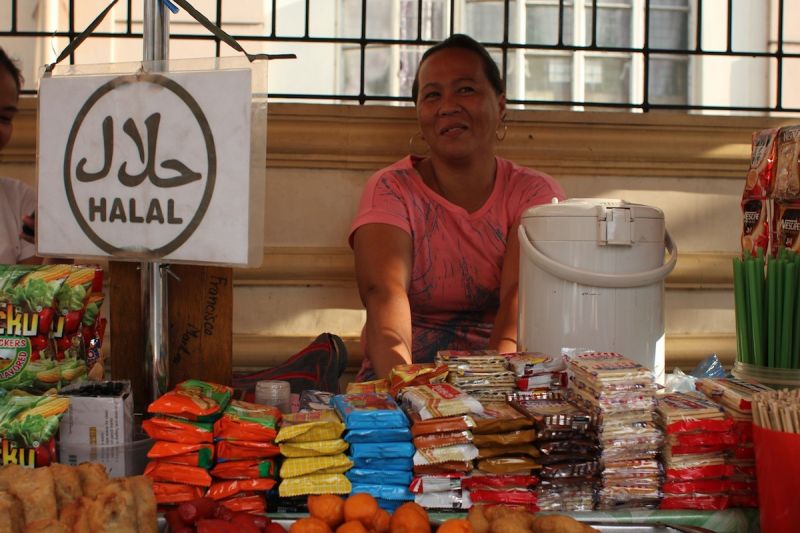 Marilou Francisco sells packaged goods and halal snacks from a table across the street from an Arabic language school in Intramuros. (Almendral)

It’s in the city’s interest that vendors like the Franciscos earn a good living. The money they make on Manila’s streets, after all, goes right back out into the city. Yet the laws that regulate vendors don’t make them feel welcome and the never-ending disruption from cars pushing through the crowded street only adds to their headaches.

Ocbeña is a member of Samaan ng mga Nagkakaisang Manininda sa Intramuros, or SANAMAI, the food vendor’s association of Intramuros. Membership means they are legally supported by the Intramuros Administration, so many of the concerns over location stability and bribes are not problems for her, but burdensome regulations are. 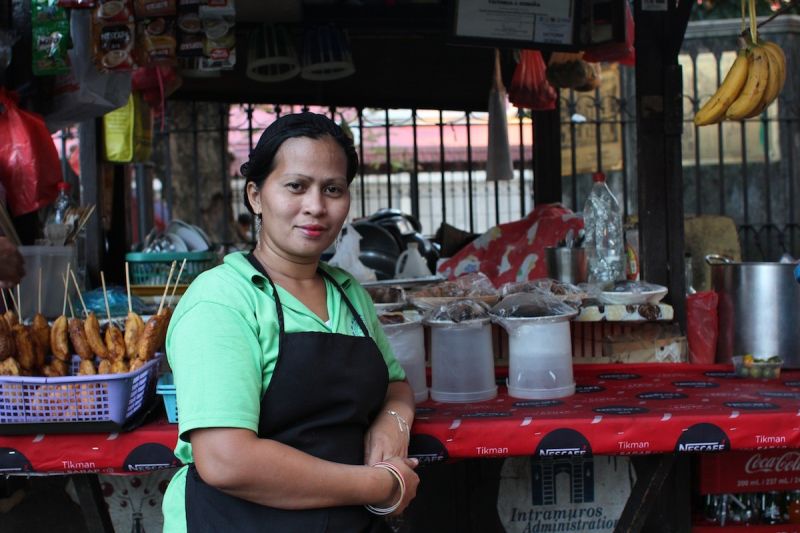 Victoria Ocbeña is a member of the street vendors association of Intramuros. (Almendral)


The plastic table next to her stall where she chops and preps food is, for instance, illegal. It can be confiscated at any time. With limitations on the size and scale of her stall, the only way for her to earn more is if the city limits the number of rival vendors, tightening market supply and funneling more customers to her stall.

If that wasn’t the case, she could add a grill to her operation so she could cook fresh barbecue sticks — a surefire hit with the lunchtime crowds. If she were allowed more than the four plastic stools at her stall counter, customers could sit down while they ate, another change that would likely draw more customers.

Ocbeña’s biggest ask would be nothing short of a wholesale rethinking of the Instramuros’ urban fabric. She said it would be nice if the street was closed off to cars, “all of our customers are commuters, they don’t own cars so it really wouldn’t cut into our business.” But Ocbeña says, “it’s really hard to imagine that will ever be allowed.”

Offical bureaucratic layers, corruption and a regulatory framework that treats street life as eyesores and nuisances, restricts the way vendors in Intramuros operate. Despite being essential to the city’s economic and social fabric, street life in Intramuros exists in gray areas and is pushed into the spaces unusable by the minority of people who own cars and can drive into the city. What the vendors of Intramuros are looking for is a physical and regulatory space that’s dedicated to how the city is already being used — and allow the life on the streets to truly flourish.