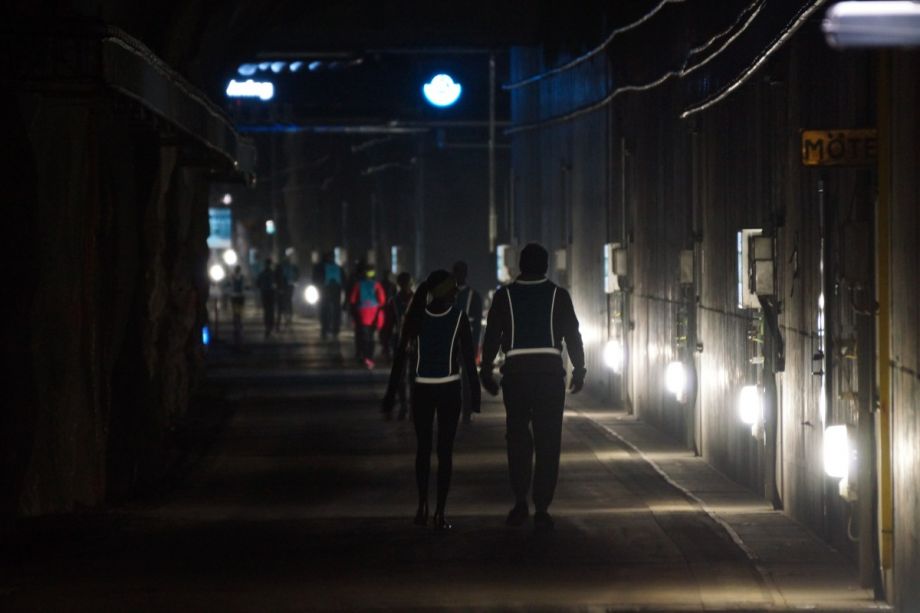 Stockholm's Citybanan tunnel opened Monday to ease the rail commute, but visitors got a chance to run through the underground passage earlier this year. (Photo by Alexandar Vujadinovic)

The tunnel, through which pendeltåg suburban trains will operate, is a bypass of the “Wasp’s Waist,” a two-track rail line feeding Stockholm Central railway station from its south. The stretch of track in question is the busiest railway segment in the country. The 6-km (3.7-mile) tunnel runs from Stockholms södra in the south to Tomteboda in the north via the city center. Two new underground stations in the tunnel provide interchange with the Stockholm metro network. Odenplan replaces the surface station at Karlsberg, while the other station, Stockholm City, lies beneath T-Centralen metro station, providing better metro connections than those at Stockholm Central, which it replaces.

The rerouting of suburban services through the Citybanan tunnel will free the “Wasp’s Waist” for use by additional intercity trains.

The 2.1-km (1.3-mile) line will run from a new station next to the rail stop over a main highway and through a tunnel under a taxiway to reach the airport terminal. It will replace an existing shuttle bus connecting the two points.

The 200 million British pound ($258.2 million U.S.) Mass Passenger Transport (MPT) line should enter service in 2021. Airport authorities are also leaning on the government to add an express-style service that would run at least four trains per hour to the Airport Parkway station as part of planned improvements to East Midlands rail service.

LLA Chief Executive Nick Barton justified the request by saying, “LLA is the fastest-growing major airport in the U.K., yet it is the only London airport without an express-style service. An improved rail service, in conjunction with the new MPT link, will improve the experience for passengers, deliver significant environmental benefits for local communities and accelerate economic growth across the region.”

Will the 10th Time Be the Charm for Clay Chastain?
While midtown Kansas City residents are in the middle of the first of three separate elections required to expand the current downtown streetcar taxing district southward to support an extension of the line to the Country Club Plaza and the University of Missouri-Kansas City campus, the expat who’s become a thorn in the side of both City Hall and local transit advocates has come back one more time with yet another sales tax proposal for a more ambitious light-rail project.

The Kansas City Star reports that Clay Chastain, formerly of K.C. but now residing in Bedford, Virginia, has once again succeeded in getting a light-rail proposal on the Aug. 8 election ballot. This latest ballot question — his 10th in 20 years — calls for a three-eighths-cent sales tax hike for 25 years to fund the construction of what he calls a “hybrid” light rail/streetcar line that would run roughly 25 miles from Vivion Road north of the Missouri River to the Kansas City Zoo in Swope Park in the city’s southeast.

Chastain’s proposed line would utilize the existing streetcar line in Main Street but head west to Broadway at Union Station and proceed along it to the Plaza. From there, the line would head eastward, with branches continuing east to the Truman Sports Complex and south to Swope Park via dedicated rights-of-way.

As with most of his previous attempts to get Kansas Citians to sign on to ambitious light-rail plans, Chastain is going it alone: He has not received endorsements from the Kansas City parks board, the city of North Kansas City or the Missouri Department of Transportation, all of whose assets he would need to use to realize this proposal.

His explanation for his effort should be music to urbanists’ ears: “It tries to transform the city into a more transit-oriented city … because that’s what people want these days. They want green, progressive, transit-oriented cities,” he told the Star.

But Kansas Citians have so far been unwilling to join him for the ride in that direction. Only one of the nine questions he has gotten on the ballot to date passed, and that one was ultimately rejected by City Council as unworkable. His previous proposal, which was on the November 2016 ballot, was rejected by 60 percent of city voters. This one is less ambitious and less expensive, but given past history, it’s likely to suffer the same fate.