Stock Exchange to Traders: Stay Off the Subway – Next City

Stock Exchange to Traders: Stay Off the Subway 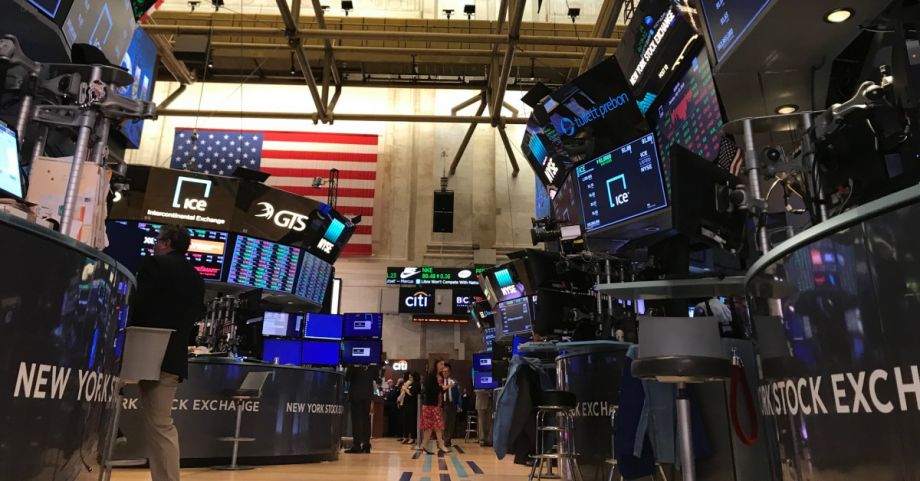 Our weekly “New Starts” roundup of new and newsworthy transportation projects and issues.

The COVID-19 pandemic has led many urbanites and urbanists to rethink the way we think about mass transit as a piece in the urban jigsaw puzzle.

Up until now, many have viewed it as a business; like airlines, intercity buses and freight railroads, transit systems are expected to earn their keep as much as possible if not pay their own way. And they have also added services aimed at luring travelers who could choose some other means of transport onto urban trains and buses. The outbreak having stripped systems of almost all these riders, those that remain are the essential workers who keep the rest of us fed, safe and healthy. The new line of thinking, promoted most notably in a pair of CityLab essays published in April and May, views it as an essential social service, which could change the way we both supply and pay for it completely.

This new way of thinking, however, carries its own set of risks. One of them is further stigmatizing those who still ride much as recipients of social welfare benefits are looked down upon in some segments of society. A recent move on the New York Stock Exchange’s part raises this specter. Another is figuring out where the money needed to run the service will come from given the likely need to run more vehicles with fewer riders on them once COVID-19 restrictions are lifted; one transit authority in Canada is considering cutting off its nose to spite its face as a money-saving move.

But not everything looks bleak on the mass transit front: projects to add service and capacity continue to advance, some through difficulties, and at least one transit agency has plans to go multimodal in a novel way, recognizing the role bikes can play as a solution to the last-mile problem.

Like their counterparts in several other large cities, city officials and transportation planners in New York have been spending much of the coronavirus lockdown period thinking about ways to keep car traffic below pre-pandemic levels and give more road space over to pedestrians and bikes. The city still plans to levy a congestion charge for all vehicles entering Manhattan below 60th Street sometime this year or next, and the city’s Transportation Department is examining whether any of the 100 miles of street and road closures the city said it would implement last month can be made permanent.

If any of those streets are in lower Manhattan, the New York Stock Exchange just announced a policy that will make keeping those streets open to all more difficult. Streetsblog NYC reported May 25 that the stock exchange will reopen its trading floor on Wall Street this coming Tuesday — and that its employees will be forbidden to take public transit to and from work.

CIty Councilmember Margaret Chin, who represents Lower Manhattan, sent an urgent letter to officials in Mayor Bill de Blasio’s administration expressing concern that this move would make traffic congestion worse and set a bad precedent other Manhattan employers might follow. Worse still are the class and public-health implications of the move: “Not only does a public transportation ban send a message of exclusion, it is unclear what kind of public health rationale, if any, was involved in this decision,” she wrote. The letter went on to say that the city must “play a leading role in overseeing and approving company reopening policies, especially in matters related to public health, transportation, and workforce protection.”

City officials were noncommittal when Streetsblog asked them about how they would respond to this move but said the mayor would have something to say by June 1.

Edmonton Transit May Take a Vacation This Summer

Canada’s fifth-largest metropolis has fewer residents than live in the Philadelphia city limits. But Edmonton, the capital of Alberta, was the first city in western Canada and the first outside Toronto and Montreal to open a modern light metro system, in 1978. Extensions of the system are currently under construction, but the COVID-19 pandemic has caused ridership to plummet in Edmonton just as it has elsewhere. The city’s transit agency, Edmonton Transit Service (ETS), has also suspended fare collection in order to help prevent the spread of the virus. The result, according to a CBC News report, is that the system is losing C$10 million (US$7.24 million) a month due to the policy combined with a 70 to 80 percent drop in ridership since mid-March.

To stanch the bleeding, the report says that Edmonton Mayor Don Iveson said May 19 that the city may mothball its buses and light-rail vehicles for the summer.

Iveson is an advocate for public transportation, but, he says of continuing service, “I just don’t have revenue to pay for it in the budget right now.”

Factoring into his thinking also is balancing provision of transit on a reduced schedule in the summer against operating service in the winter, when Edmontonians are more likely to need it.

The move is interpreted by some as a way of applying pressure on the provincial and federal governments to provide relief aid for Canadian transit systems. The Federation of Canadian Municipalities has asked Ottawa and the 10 provinces to supply C$10 billion (US$724 million) in aid to cover lost revenue due to the pandemic if it lasts through September; if the crisis continues through year’s end, the figure rises to C$15 billion (US$1.09 billion). One-quarter of this amount would go to transit systems.

The head of the union representing Edmonton’s transit workers said that shutting down service was the wrong way to economize. “That would cause a disaster to the city of Edmonton,” Steve Bradshaw, head of Amalgamated Transit Union Local 569, told the CBC. “People need essential transportation services to get to their jobs, to get to their shopping.” Instead, Bradshaw said the city should try to increase the pressure on Ottawa and Alberta by ramping up service in order to meet travel needs as the economy reopens.

From Los Angeles come reports on two rail transit extension projects. One is a boring piece of good news, while the other has set teeth on edge.

First, the boring part. Railway Age reports that the two tunnel boring machines at work on the Metro Purple Line extension to Westwood’s initial section, Soeyon and Elsie, have completed 75 percent of the digging out of the section. Soeyon, which started work later than Elsie, broke through to the site of the planned Wilshire/Fairfax station near the western end of the Miracle Mile on May 21; Elsie got there with the first tunnel on April 4. Both began their current excavation at the Wilshire/La Brea station at the Miracle Mile’s east end, tunneling past the La Brea Tar Pits along the way.

One mile of tunneling remains on the four-mile-long Section 1, which will take the Purple Line from its current western terminus at Wilshire and Western to Wilshire and La Cienega boulevards on the Beverly Hills border. Boring work on this last segment should wrap up this fall, with the section scheduled to open in 2023. When all three phases are complete in 2027, the Purple LIne will extend all the way to the UCLA campus and VA hospital in Westwood.

In a news release, the Los Angeles County Metropolitan Transportation Authority (LA Metro) noted that this section of tunnel was one of the most challenging the agency has built. “The agency’s modern, high-tech TBMs have mined through a unique combination of soils and geologic conditions, including tar sands and methane gas,” the release noted. “The breakthrough also marks another milepost in the decades-long effort to extend L.A.’s subway farther west underneath Wilshire Boulevard, one of the busiest and most congested urban thoroughfares in the United States.”

On the less-sanguine front, Railway Track and Structures reports that the projected opening date for the Crenshaw light metro line has been pushed back to 2021, and LA Metro is not certain that even that date will be met due to various setbacks and contractor errors. Those problems in turn have led the agency to seek an additional $120 million to complete work on the $2-billion, 8.5-mile line connecting the Crenshaw neighborhood in LA’s mid-city area with its airport, serving the affluent Baldwin Hills neighborhood and several South Bay cities, including Inglewood, along the way.

The Los Angeles Times reports that the $120 million request will increase the total project budget by $90 million, or four percent. The last total increase in the project budget came in 2013. RT&S reports that the South Bay Council of Governments will cover 37 percent of the overrun, but the rest will need to be covered from other sources. Most of the $90 million represents pay for workers whose work was supposed to have been finished by now, but $4 million will go to a claims support consultant who will prepare documentation for claims filed by the project contractor. The contractor and LA Metro had reached a settlement meant to cover loss claims for construction problems in 2017 and 2018, but additional problems have been identified since.

The line was originally to have opened for service in 2019.

Capital Metro, the agency providing transit service in Texas’ notoriously congested capital city, is moving to add another transit mode to the bus and rail lines it now operates: Bicycles.

The Austin Monitor reports that the Capital Metropolitan Transportation Authority has proposed incorporating Austin’s B-cycle bike share network into the mass transit system. Under the proposal, both bike users and transit riders would be able to ride buses and rent bikes with the purchase of a bus pass. The bike-share service would continue to be operated by B-cycle operator Bike Share of Austin, but it would be rebranded “MetroBike” and marketed as an integral part of the Austin mass transit system.

Capital Metro officials describe the move as a more cost-effective way to extend mass transit’s reach to parts of the metropolitan area it does not currently serve adequately with fixed routes. The bike-share network would likewise expand beyond central Austin under the proposal, which also calls for creating “mobility hubs” with bike-share docks at outlying transit stops. A new modular bike docking station design allows for docks for just one bike to be installed.

Under the proposal, which the city council will consider in June, Capital Metro would take over the planning and fare coordination functions and develop seamless integration between the bike share and mass transit networks. It would also split the cost of buying 200 electric bikes currently on loan with the city. The city and Capital Metro have also applied for a Federal Transit Administration grant that would fund the full electrification of the B-cycle/MetroBike network.

City Councilmember Ann Kitchen welcomed the proposal warmly. “If you don’t live in the core, you don’t have access to this program,” she told the Monitor. “So, expanding it along our transit lines that go deeper out into the community I think is just going to be a huge plus.”

Know of a project or subject that should be featured in this column? Send a Tweet with links to @MarketStEl using the hashtag #newstarts.