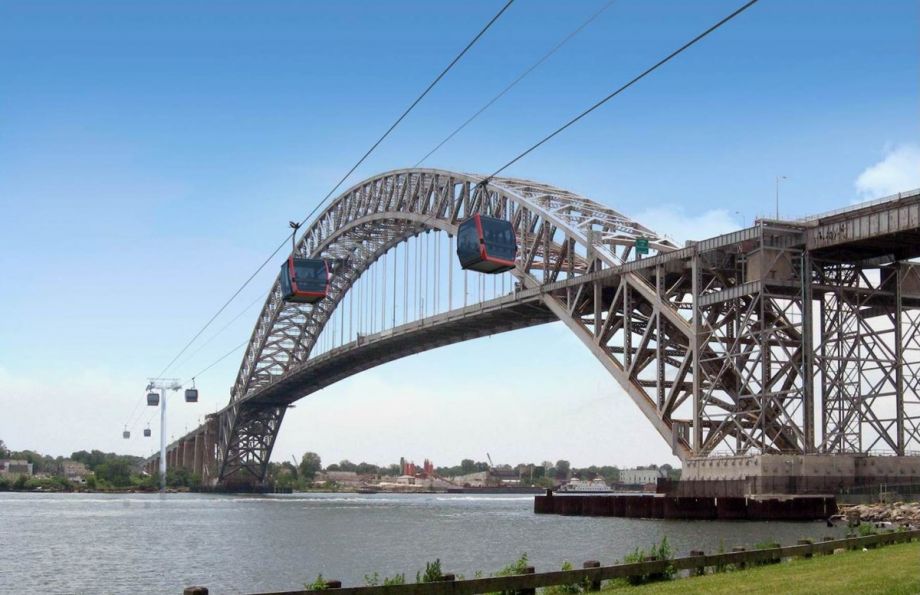 Rendering of an aerial tramway for Staten Island (Credit: Leitner-Poma of America)

Staten Island Aerial Gondola Plan Draws Mixed Reviews
The latest effort to ease Staten Islanders’ journeys to Manhattan will take to the air if officials on the island have their way, but its fate may depend on whether officials in Bayonne, New Jersey, will let it touch the ground where the Staten Islanders want it to land.

The Staten Island Economic Development Corporation, which announced a competition to design an aerial tramway connecting the island to points off it, chose Leitner-Poma of America’s (LPOA) proposal for a line that would run over the Kill van Kull strait from Elm Park on the island to the Eighth Street station of the Hudson-Bergen Light Rail (HBLR) line in New Jersey, paralleling the Bayonne Bridge.

Alexandra Porto, SIEDC vice president of membership and outreach, told SILive.com that the route was chosen because it is the most efficient in terms of cost, total length and travel time. Total travel time from Elm Park to the World Trade Center PATH station would be 33 minutes, including a 6-minute gondola ride.

A Hudson Reporter article on the proposal notes that its $60 million projected cost compares very favorably with a light-rail line across the bridge, which would cost $1 billion to build. The SIEDC said the line would be constructed without public funds. The line would also tie in with a proposed light-rail line along Staten Island’s west shore.

Meanwhile, across the Kill van Kull, Bayonne officials aren’t so hot on where LPOA’s proposed line would touch down. In a Jersey Journal article on NJ.com, Bayonne Mayor Jimmy Davis said the line would have to travel too far to reach the Eighth Street station. He also expressed concern about the effect the line would have on the neighborhood between First and Eighth streets, where residents have complained about the ongoing project to raise the deck of the Bayonne Bridge so larger ships can pass beneath it.

Davis said the proposal would be more viable if the gondola line touched down at First Street and Staten Island officials helped extend the HBLR line to First Street.

West Hollywood May Get Rail Transit Sooner
According to a report in Railway Track and Structures, the Los Angeles County Metropolitan Transportation Authority (LACMTA) would like to fast-track a project that would connect West Hollywood to the region’s rail transit network.

In a letter to the city dated Sept. 16, LACMTA CEO Phil Washington outlined an accelerated schedule for preliminary studies necessary for work on a proposed light-rail line connecting the Metro Red Line with the Crenshaw/LAX Northern Extension via West Hollywood to proceed. The schedule calls for completion of the current feasibility study for the line by next June, for a study of preferred alignments to wrap up by the end of 2017, and for an environmental impact report to be finished by 2018.

The proposed route would connect four Metro rail lines — Red, Purple, Expo and Green — and make it easier for West Hollywood residents to reach LAX and other Westside destinations as well as improve mobility choices for underserved communities along the corridor.

The accelerated study schedule is part of an LACMTA initiative called “Operation Shovel Ready” that seeks to accelerate a broad range of transportation projects by up to 20 years. Funds for the projects would come from a countywide sales tax increase that will be voted on Nov. 8. The West Hollywood City Council reaffirmed its support of the ballot question by voting to endorse it Sept. 20. If passed, Measure M would produce $860 million a year in revenue for transportation projects, with a portion of the revenue distributed to municipalities in the county. The measure requires a two-thirds majority vote to pass.

New Port Authority Terminal Designs Aren’t the Last Word
The Port Authority of New York and New Jersey released last Friday the designs for New York’s busy bus terminal submitted by five finalists in a competition to find a new look for the station. But instead of picking one of these as the winning design, the Authority says they will serve as a starting point for discussion about the final form the new terminal will take, according to a story in AM New York.

The change-up occurred after elected officials representing the Hell’s Kitchen area, where the current terminal is located, objected to the Port Authority’s plans to build the new terminal right next to the current one. Although some of those officials called for the new terminal to be moved out of the neighborhood entirely, each of the five concepts involves building on land near the current site. The Port Authority says it will engage in “extensive consultation” with local elected officials and the community about the terminal’s replacement, and Authority Chairman John Degnan said that “no one” of these designs “is going to emerge … as the final concept.” He did add, however, that the agency would prefer to build a new terminal without taking land through eminent domain.