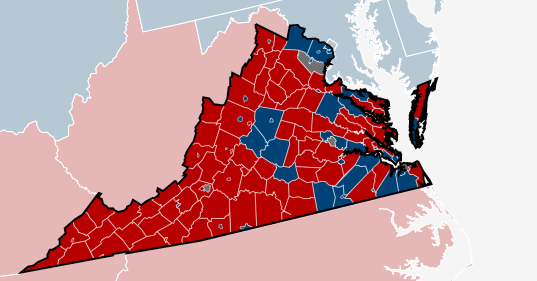 Republican leaders in six states that voted for President Obama last year are proposing drastic changes to the electoral college system, seeking to alter the way electoral votes are distributed in swing states, including Virginia and Pennsylvania, that could dilute the power of voters in Democratic-leaning urban districts.

A senate committee last week moved the bill, sponsored by Republican Sen. Charles W. Carrico, Sr., to the senate floor for a vote.

During last year’s presidential election, Obama gained all of Virginia’s 13 electoral votes after having won 50.8 percent of the state’s popular vote there. Had Carrico’s bill passed before then, the president would have received only four electoral votes while challenger Mitt Romney would have received nine, despite Romney having only won 47.8 percent of Virginia’s popular vote.

A map of the election results from the Virginia State Board of Elections shows that in three of the congressional districts — two of which went for Romney — the vote was decided by fewer than 5,000 votes.

Unsurprisingly, Obama dominated the state’s more urban areas — such as Richmond, Fairfax, and Arlington and Alexandria counties — while Romney had more support in the rural areas. One could conclude, then, that Carrico’s bill would disproportionately affect urban voters, as their vote could be overridden by voters from smaller congressional districts.

Republican National Committee Chairman Reince Priebus told the Milwaukee Journal Sentinel this month that proposed changes to the allocation of electoral votes are “something that a lot of states that have been consistently blue that are fully controlled red ought to be looking at.”

Pennsylvania Republicans have sponsored a similar bill that would disperse 18 of the state’s 20 electoral votes among congressional districts. The remaining two would go the candidate that won the state’s popular vote. As with the Virginia bill, it could have a serious impact on voter turnout in urban areas that lean Democrat.

“House Bill 94 is not designed to increase the effectiveness of our democracy,” said state Rep. Brian Sims, a Democrat, in a prepared comment. “What it is, is a clear and obvious tactic by the Republican Party… to take the next presidential election.”

Of the six states considering changes to their electoral college distribution — the other four are Wisconsin, Ohio, Michigan and Florida — only Virginia would allocate the extra two votes to the winner of the most congressional districts instead of the popular vote.

Both bills face strong opposition. Virginia Gov. Bob McDonnell announced last week that he opposes the Virginia bill, while in Pennsylvania, online petitions and even a Facebook group dedicated to the defeat of that’s state’s bill have emerged before the bill has even left a house committee. A similar bill was proposed last year by Senate Majority Leader Domanic Pileggi, but the bill failed to make it out of committee.