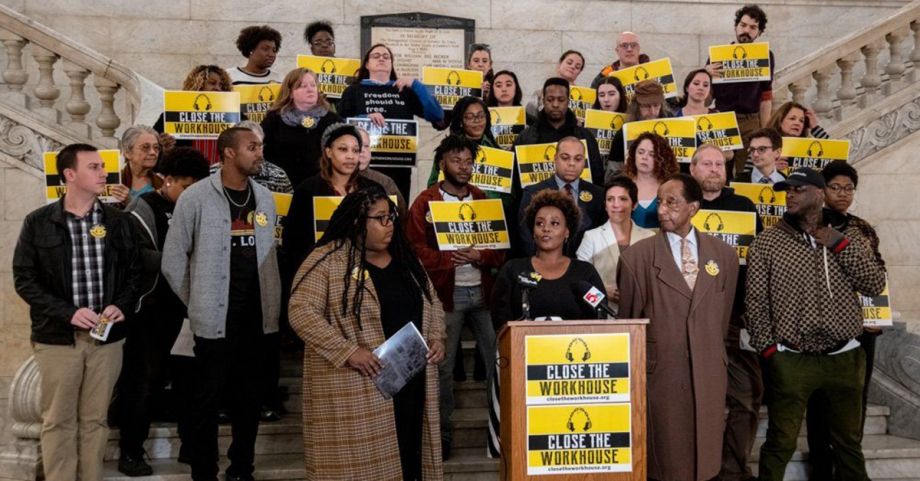 On Friday, July 17th, the St. Louis Board of Aldermen unanimously passed a bill to close the city’s medium security jail, also known as the Workhouse. Board Bill 92 will both close the notorious city jail by the end of 2020 and redirect money budgeted to it to establish a city agency focused on supporting re-entry and a fund to re-envision public safety.

The bill, and the overwhelming support from local politicians, is the result of a multi-pronged grassroots campaign that launched in 2018. “It was thousands of hours of talking to people, hundreds of hours of canvassing and meeting people where they are in their communities,” says Inez Bordeaux, lead of the Close the Workhouse campaign. “We were talking about that this campaign isn’t just about closing the jail, it’s about re-envisioning public safety, investing in people and communities instead of police and jails.”

Bordeaux is manager of community collaborations for ArchCity Defenders, which teamed up with Action St. Louis and the Bail Project to set their sights on closing the jail after dangerous conditions inside during a 2017 heatwave. The Workhouse is known for inhumane conditions — from poor medical care to mouse infestations — particularly within lower-income minority communities of St. Louis. “It felt like a lot of times we were preaching to the choir in some neighborhoods — it didn’t take a lot of convincing [to support closing the jail],” says Bordeaux.

The Workhouse is also notorious in that it incarcerates people on pre-trial detention who have not yet been convicted of a crime. As opposed to focusing singularly on closing the jail, “the campaign has been about ending systems like cash bail,” says organizer Jae Shepherd.

To achieve goals of closing the jail, redirecting its budget into marginalized communities, ending pre-trial detention and cash bail, the trio of community organizations had to be strategic. ArchCity Defenders and Action St. Louis (a community organization formed following the Ferguson uprising) started a street outreach team to canvass neighborhoods and make a case for closing the Workhouse. ArchCity Defenders, a legal advocacy organization, filed lawsuits, with one challenging inhumane conditions of the Workhouse as well as a wrongful death lawsuit filed on behalf of a mother whose son died in the jail.

As for the Bail Project, an organization with a national revolving bail fund that assists cities around the country, “our role was literally to empty the jail,” says Michael Milton, the statewide advocacy and policy manager for Missouri. Following a Black Mama Bail out campaign in 2017, the organization has bailed out another 1,300 people from the Workhouse since 2018. The jail, which has a capacity of 1138, now has a population of 83 people.

After bailing each person out, the Bail Project provided an in-depth needs assessment to connect them with local resources, as well as support to make court dates through text messages and transportation assistance. Crucially, the Bail Project introduced each individual to the Close the Workhouse campaign. “We were working with our clientele so they would be the core members of our campaign,” explains Milton.

The value of impacted people leading the campaign was set early on. In 2016, Bordeaux spent 30 days inside the Workhouse because she couldn’t afford bail. After her release she joined the campaign and eventually became a lead organizer with ArchCity Defenders. “Being at the Workhouse was the worst experience of my life, but it radicalized me enough to propel me into action,” she says.

Milton recalls working with a 17-year-old client who was beaten inside the Workhouse. “He begged me, saying if I can get him out, he will help us shut this place down,” he says. The young man ultimately spoke of his experience inside the jail for the campaign.

The campaign also released a report on how to close the jail, then updated and re-released it in early 2020. Activists used it during canvassing and engagement with local politicians to show how they believed the jail could be safely closed. One statistic bolstering their argument: The city spends $16 million a year to operate the jail, but it’s largely empty.

At the onset of the campaign, Alderwomen Cara Spencer was “not immediately on board with their calls to action,” she says. “I represent an area that has a very high rate of crime … it’s top of mind for most of my constituents, and many have little tolerance for those who are perpetrating crime.”

She started hearing questions from constituents about the campaign and started a dialogue with the organizers. “The real key for me was to sit down and listen and get to know the advocates and activist community and be able to share my concerns and hear theirs,” she says. “It was meaningful dialogue that helped me better understand the issues and really talk through what this looks like, what it means and how this feels for St. Louis.”

Such multi-pronged advocacy resulted in various successes. A year ago, after a lawsuit filed by ArchCity Defenders and other organizations, a federal judge ruled cash bail in St. Louis was unconstitutional.

This summer, Alderwomen Spencer called for the city’s top three leaders to write the jail out of the city’s strapped budget. Though it was not defunded, Board of Aldermen president Lewis Reed introduced Board Bill 92 “to begin the process of closing the St. Louis City Medium Security Institution (MSI), also known as the Workhouse, as a detainee center.”

The bill initially called for reallocating $7.6 million of the funding reserved to run the Workhouse, but advocates called for amendments to the bill to ensure “we use this moment not only to close a hellish jail, but also to build a foundation of people-centered reinvestment in our communities,” as they stated on their website. They pushed that in subsequent years the city reallocate the full $16 million historically reserved to run the jail.

Politicians and advocates agreed that redirected funds will establish a Division of Supportive Re-entry and a Re-envisioning Public Safety Fund. The Division of Supportive Re-entry will hire additional social workers who will work with and assist current detainees and their families. The details on the fund are still being worked out, but advocates hope the money can be redistributed through a participatory budgeting program.

With support of the city aldermen and women the bill is heading to Mayor Lyda Krewson’s desk, who has previously expressed interest in repurposing the jail. Advocates expect her to sign.

“I always knew we would get here, I never had any doubt that the Workhouse would close,” says Bordeaux. “Organizing in this moment means celebrating the win but also understanding this is the first step in many, many, many steps in order for the promises of this campaign to be fulfilled.”