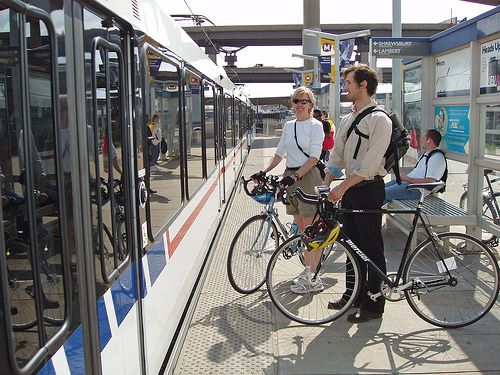 This is the first post in a new, ongoing column by Yonah Freemark called Grassroutes, which will delve into the nitty-gritty of America’s transportation system. Over the next year, it will provide in-depth explorations of the work of activists, businesspeople, politicians and bureaucrats in remaking the way the country gets around. Yonah writes on urbanism and blogs at The Transport Politic.

It was a huge oversight: When transit proponents in St. Louis pushed for the approval of a sales tax increase for better bus and train service in November 2008, they never made clear what the funding was for. Predictably, the increase failed. With a referendum on a transportation sales tax coming in April, local pols are determined not to make the same mistake.

“People didn’t know where the money would go if it did pass,” Jennifer Ash, a real estate manager at Metro, the local transit agency, and a writer for the system’s blog, told me. “People don’t understand that it’s not the transit agency that decides where the light rail routes are going to go.” In other words, for many voters, the need for the tax wasn’t obvious. Service cuts would be prevented — maybe. Some neighborhoods might get more buses — or not.

The less-than-perfect reputation of the local transit authority, spoiled by random acts of violence, made the situation worse.

Thus the results of the 2008 referendum were predictable: Measure M went down in defeat despite a nationally pro-transit environment. The same night, voters in Los Angeles, Seattle, and Honolulu advanced massive new rail projects, each of whose scope was well-defined. But in the following months in St. Louis, Metro cut services drastically and put on pause any serious expansion projects. The message to everyone was clear: the sales tax increase was a necessary thing.

This time, transit supporters agreed, if they asked the citizenry to approve more spending, they would have to make very clear beforehand where the funding would be going. That’s why in preparation for another vote on increasing the sales tax for transit, to occur on April 6th, Metro is conducting an aggressive public courting.

In developing a thirty-year plan, which it has labeled Moving Transit Forward, Metro aims to draw up a proposal for its future good enough to get the public on board. In an interview, Jessica Mefford-Miller, the agency’s Chief of Planning and System Development, told me, “Any successful large urban transit system needs a forward-looking long range plan for its enhancement and development.”

Because it is a government agency, Metro cannot get directly involved in supporting April’s referendum (being promoted by an independent group), but it is clear where its interests lie, and its strategy is not coincidental.

Indeed, the 30-year proposal, which will be finalized in March — just before the election — will suggest a number of new light rail corridors, a network of bus rapid transit lines, and two commuter rail links. This time, voters will know exactly what they’re getting with more spending, and Metro hopes that will be good enough to win approval for the sales tax increase.

But the Moving Transit Forward document is more than that: It’s a step towards serious incorporation of the public in transit planning, a rare effort by a government agency to use a community consultation to define its long-term priorities. Says Mefford-Miller: “To a large extent, this has been a very open process. We have had over 20 public meetings since October and we launched a website devoted to the plan.” The inclusion of buses in the plan, in fact, was based on popular approval of the concept rather than a pre-picked choice by transit planners.

Ash agrees with the sense that Metro has a responsibility to be held accountable through transparent decision-making. “We have an image problem,” she admits. “We haven’t been great at communicating in the past.” If the public recognizes the agency’s efforts, it may well endorse it with a “yes” vote in April.