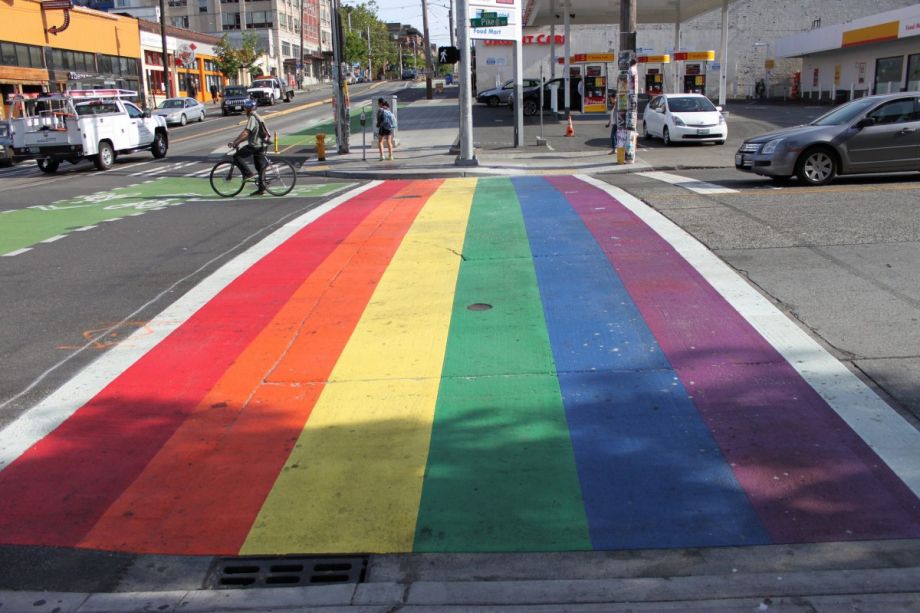 St. Louis will allow its painted crosswalks to fade away after learning that the designs violate Federal Highway Administration guidelines, reports the St. Louis Post-Dispatch.

Hailed as a means to beautify and brand neighborhoods, the rainbow stripe, fleur-de-lis and botanic-themed crosswalks were installed in the last two years. But St. Louis officials learned via a national webinar in November that the FHA has prohibited such designs since 2011, stating that “crosswalk art is actually contrary to the goal of increased safety and most likely could be a contributing factor to a false sense of security for both motorists and pedestrians.”

Jamie Wilson, St. Louis’ bike and pedestrian coordinator told the Post-Dispatch, “I don’t honestly believe someone’s going to trip over a fleur-de-lis crosswalk, but at the same time we want to be consistent with the memo the feds put out … It’s probably an ultra-conservative approach when it comes to safety, which is fine.”

The city won’t tear out existing painted crosswalks unless evidence suggests they are truly decreasing safety. Certain crosswalks are expected to fade quickly as paint deteriorates, but others were imprinted into the asphalt at a cost of several thousand dollars, and are expected to last five to 10 years.

New plans for similar designs will be turned down, but designs that utilize natural colors that distract less from the traditional white lines meet federal guidelines and may be approved.

The sudden rediscovery of this 2011 regulation raises questions about the future of painted sidewalks in other cities. Philadelphia, Seattle and Key West are just a few to paint rainbow crosswalks within the last year to celebrate their LGBTQ communities.

On the other hand, while the FHA guidelines discourage decorated sidewalks out of safety concerns, research has shown that marked crosswalks may be no safer than unmarked crosswalks, whether their stripes are rainbow or regulation white. If the goal is to decrease pedestrian injuries, cities might consider leaving those characteristic crosswalks alone, and installing traffic-calming measures instead.