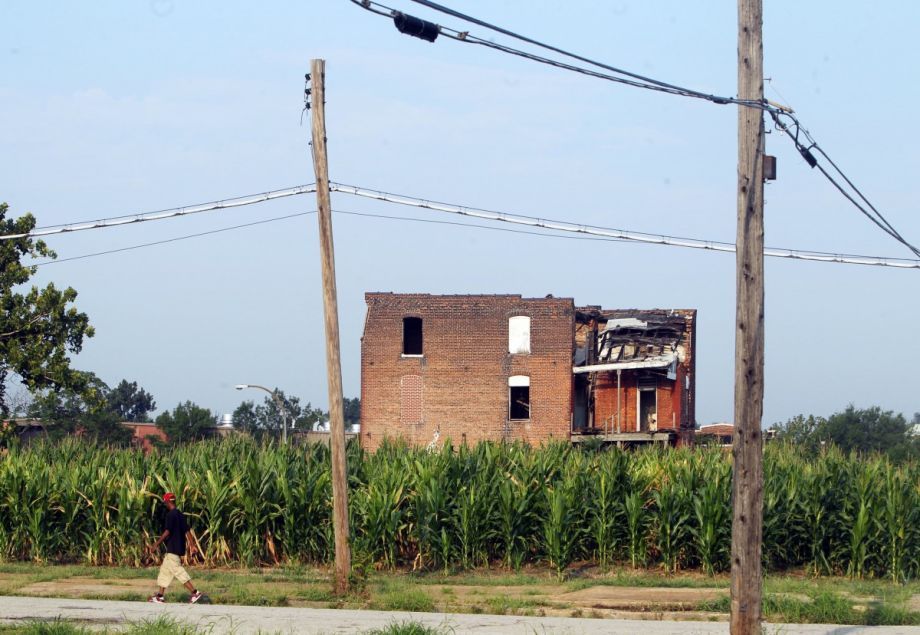 A blighted lot in St. Louis. (Photo by Laurie Skrivan)

The fight against neighborhood blight could get a significant boost in St. Louis, from the formation of a new coalition of government, community, and nonprofit groups to address the city’s 25,000 vacant and abandoned properties, St. Louis Public Radio reported.

Nearly a dozen stakeholders — including neighborhood associations, academia, and legal services — announced on Tuesday their formation of a “Neighborhood Vacancy Initiative” to “work together to create tools and resources to address the problem of vacancy in St. Louis,” Sundy Whiteside, board president of the St. Louis Association of Community Organizations, said at a press conference, the radio station reported.

The 25,000 vacant and abandoned St. Louis properties include 7,100 abandoned buildings. The coalition plans a multipronged approach to dealing with the issues associated with them, including crime, drug dealing, gun assaults, and falling property values — not to mention the social impact of blight. A March 2018 study from Columbia University Mailman School of Public Health found that cleaning up distressed lots doesn’t just increase residents’ feelings of safety, it affects their actual safety as well.

The 38-month Columbia study also discussed how simple tweaks like trash removal or upgrading lawn conditions often do more to transform blight than “more expensive solutions” — which can in turn lead to a rapid influx of wealthier residents, causing the displacement of existing low- and moderate-income residents, creating “further entrenched neighborhood segregation.”

Other American cities are dealing with urban blight in creative ways. In Long Beach, California, the state developed “Urban Agriculture Incentive Zones,” giving tax breaks to landowners who pledge to use their vacant properties for urban gardening or farming for at least 5 years. In working with its 23 square miles of weed-filled vacant land, the nonprofit Detroit Future City (DFC) has built a grant program to develop a green stormwater infrastructure and created sustainable templates to build “rain gardens” and native-plant meadows that redirect rainwater.

In St. Louis, the Neighborhood Vacancy Initiative hopes to tackle the issue from many angles, including holding absentee and negligent property owners accountable through litigation or government fines. Other solutions include better transportation options and the popular “Mow to Own” initiative, which allows a citizen to maintain a vacant property and keep it cleaned up, and after a certain period of time, receive title to the land.